Skip to content
Become a member and get exclusive access to articles, live sessions and more!
Start Your Free Trial
Home > Features > In Defense of Dick Haymes 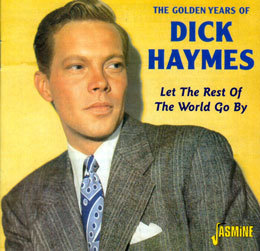 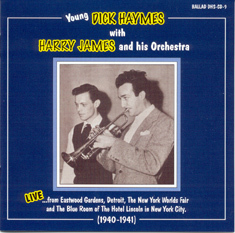 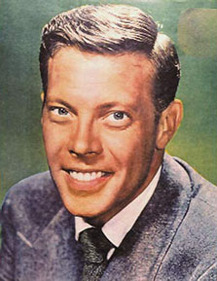 One of the great, openly sung, rivalries of the 1940s pitted Frank Sinatra against Dick Haymes. Ultimately, of course, Sinatra achieved massively greater success than Haymes; but between the late 1930s, when both enjoyed their first flush of success, and the late 1940s, when both of their careers spiraled downwards, their popularity was neck-and-neck. Actually, though their record sales and appeal as movie stars were comparable, Haymes earned more gold records during that decade (thanks, in part, to his frequent vocal partnerships with Helen Forrest) than did Sinatra.

The career parallels between the two are quite remarkable, with Haymes, it seems, forever playing catch-up. When Sinatra concluded his brief association with Harry James’ band in 1939, Haymes stepped in to replace him. Three years later, when Sinatra famously parted company with Tommy Dorsey, Haymes was again his successor. Both made their screen debuts with Dorsey. By 1945, as both were elevated to major screen star status – Sinatra with the MGM blockbuster Anchors Aweigh and Haymes with the Hollywood adaptation of Rodgers and Hammerstein’s State Fair – their solo careers were in high gear. Then both hit the professional skids as the 1950s dawned. Soon afterward, both were embroiled in tempestuous marriages to fiery screen idols, Sinatra with Ava Gardner (who helped salvage his career) and Haymes with Rita Hayworth (who did nothing to boost Haymes professional standing, but did help bolster Sinatra’s meteoric career recovery, playing opposite him in Pal Joey, the film that would cement his image as a likable cad.)

As anyone with even an inkling of Sinatra rags-to-riches-to-rags-to-mega-riches story knows, his early ’50s comeback, propelled by his Oscar-winning performance in From Here to Eternity, was primarily fueled by his renewed recording success, at Capitol. Working primarily with arrangers Nelson Riddle and Billy May, Sinatra released 16 top-selling albums, many considered the finest of not only his career but of the entire era, before launching his own label, Reprise, in 1961.

A fact that usually goes unnoted is that Haymes also signed with Capitol in the 1950s, marking the only time the archrivals toiled for the same label. Haymes produced only two albums, plus a handful of singles, for Capitol. Neither LP was a strong seller, and Haymes’ tenure with Capitol, begun in 1955, was over in less than two years. There has since been much conjecture that sales of Haymes’ Capitol releases were marred by headline-grabbing tales of his near-deportation (born in Buenos Aires, he had never become an American citizen) and his stormy relationship with Hayworth. (Though equally explosive gossip about Sinatra and Gardner’s turbulent marriage didn’t hurt his sales).

It has often been reported that Capitol offered Haymes the opportunity with Riddle or May, but the he opted to instead work with neophyte Canadian arranger (later turned successful screenwriter) Ian Bernard. One must, however, wonder if Sinatra, surely not eager to have his one-time rival working with either or both of the arrangers who had fueled his dynamic return, might have had a hand in the decision. It is hard to imagine why, given the tatters his career was in, that Haymes would have backed a virtual unknown in favor of two pros with a proven record for career re-ignition (unless it was perhaps to distance himself from the Sinatra sound).

Truth is, Haymes did extremely well by Bernard. The two, ballad-heavy albums – Rain or Shine, captured just prior to Christmas 1955; and Moondreams laid down in April ’56 – are the finest recordings of Haymes’ career. Indeed, both can hold their own against any of Sinatra’s Capitol (or Reprise) sessions. That Haymes’ was, among white singers, possessor of the greatest baritone voice of the 20th-century was never better evidenced than across these 24 tracks.

In an obvious attempt to recapture some of Haymes’ fans from a decade earlier, Rain or Shine is a somewhat nostalgic affair, including new renditions of three of his biggest 1940s hits, “You’ll Never Know,” “Little White Lies” and “It Might As Well Be Spring.” Haymes remains in a warm, deeply romantic mood throughout, delivering impeccably beautiful readings of, among others, “The Very Thought of You,” “How Deep Is the Ocean,” “The More I See You,” “Where or When,” “Love Is Here to Stay” and the quasi-title track, “Come Rain or Come Shine” (the latter two arranged by a young Johnny Mandel).

Moondreams continues in the same romantic vein, though there is no backward-glancing among the 12 tracks, and Haymes (never one to swing with Sinatra fervor) does manage to balance such heartbreakers as “You Don’t Know What Love Is” and “What’s New” with breezy covers of “I Like the Likes of You,” “Isn’t This A Lovely Day” and “Between the Devil and the Deep Blue Sea.” I defy you to find more tender or heartfelt interpretations of “Imagination,” “When I Fall In Love” or “The Way You Look Tonight.”

Haymes’ nine Capitol singles, two of which were never released, are comparatively weak, due largely to the inferiority of the material. Two 1956 tracks, recorded with Billy May’s orchestra – the suggestively torrid “C’est La Vie” (a ’55 hit for Sarah Vaughan) and the playful “I Never Get Enough of You” (which bears a striking similarity to the Four Lads’ 1958 hit “There’s Only One of You”) – easily rise above the rest.

When Rain or Shine and Moondreams fell disappointingly flat with the record-buying public, Haymes struck out on his own to deliver the optimistically titled Look at Me Now! Turned down by all of the major and second-string labels, Haymes finally found distribution with Hollywood Records, an ineffectually tiny L.A. outfit. Though the album features decent (if occasionally overwhelming) arrangements, backing by the Maury Laws Orchestra and Cy Coleman at the piano, the limits of Haymes’ financial backing are evident in the extremely poor production values. So budget-driven was the project that, to reduce royalty fees, only 10 of the dozen recorded tracks were included on the finished album. It tempting to consider how superb Look at Me Now! might have been if handled with the skill and care that were Capitol hallmarks. But the platter does have its merits, particularly a satiny “This Time the Dreams on Me” featuring just Haymes and Coleman, and a dark, sensuous “A Sinner Kissed An Angel.”

Haymes delivered just one more album before drifting into semi-retirement in the early 1960s. Again tied to a small label, Warwick, with inadequate distribution muscle, Richard the Lion-Hearted – Dick Haymes That Is! is far better than its corny title and equally silly cover design, featuring a puffy-looking Haymes sharing his copy of Variety with a seemingly nonplussed jungle cat, suggest. Rust has started to appear at the edges of Haymes’ rich baritone, the decay surely accelerated by his losing battle with the bottle, but it only marginally diminishes his surprisingly peppy handling of “Pick Yourself Up,” “Blue Champagne,” “Anything Goes,” “I’ve Heard That Song Before” and “Lulu’s Back In Town,” featuring brassy, sophisticated arrangements by Ralph Burns. Of special interest is Haymes cover of Cy Coleman and Carolyn Leigh’s “Playboy Theme.” If ever there was a tune custom-tailored for the ring-a-ding-ding Sinatra, it was this one. But Sinatra never touched it, leaving Haymes’ loose, urbane (and distinctly Tormé-esque) reading to stand on its own. The album’s best track is, rather ironically, the one that harkens back a decade-and-a-half to the pinnacle of Haymes’ popularity. It is a rousing, and impressively robust, update of the State Fair gem “That’s For Me.” Though Haymes would return to the recording studio in the 1970s and manage a minor resurgence, it seems a fitting adieu to an underappreciated master who spend too much time in an even bigger giant’s shadow.

Fortunately, Haymes’ has fared well on the CD front. Most of his hit recordings from the 1940s, including those with Helen Forrest, have been reissued in various combinations. For a long while, the Capitol albums were only available as extremely pricy and difficult-to-find Japanese imports. But in 2006, EMI released The Complete Capitol Collection with all 24 tracks from Rain or Shine and Moondreams plus all of the singles and a couple of rare outtakes. The set is still in print, and also downloadable on iTunes. Look at Me Now! has also found its way onto CD (again as a Japanese import), complete with all 12 of the tracks originally intended for the album plus two bonus tracks: 1957 radio transcriptions of “What’s New” and “Moonlight Becomes You.” It doesn’t come cheap (Amazon.com currently lists it at over $50), but is available. Intriguingly, it is part of a series advocated by the Sinatra Society of Japan. And, like so many jazz rarities of the 1950s and ’60s, Richard the Lion-Hearted was, in 1990, released on CD by Barcelona-based Fresh Sound Records. It has since drifted out of print, but used copies are relatively easy to find via Amazon or eBay.

If you’d like to share your comments about Dick Haymes or have suggestions for future installments of Hearing Voices, please direct your email to [email protected]

First the good news: As you can see in our annual Festival Guide, there are plenty of jazz festivals scheduled to happen around the world … END_OF_DOCUMENT_TOKEN_TO_BE_REPLACED

Steve Lacy was once a brilliant bebop player. Yet conventional wisdom says the opposite. Many have long argued that a key to the innovative soprano … END_OF_DOCUMENT_TOKEN_TO_BE_REPLACED

What is a jazz film? Does it have to be a film about jazz and the people who play it? Or can it also be … END_OF_DOCUMENT_TOKEN_TO_BE_REPLACED

Films that tell stories about jazz open a revealing window on the place and perception of the music within popular culture. See Kevin Whitehead’s compelling … END_OF_DOCUMENT_TOKEN_TO_BE_REPLACED