Skip to content
Become a member and get exclusive access to articles, live sessions and more!
Start Your Free Trial
Home > Features > Hearing Voices: From California With Love 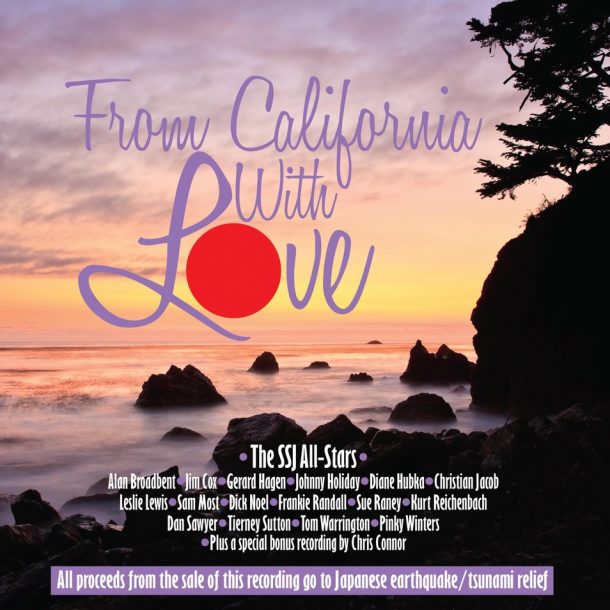 Rare is the American jazz artist whose career hasn’t been expanded, extended or otherwise enriched by Japanese fans. Now, more than a dozen West Coast performers are reciprocating with From California With Love. Masterminded by Bill Reed of SSJ Records, all proceeds from the 13-track compilation will be contributed to the ongoing relief efforts for the devastating earthquake and tsunami that struck Japan this past March.

The project was born the morning after the disaster when Reed phoned vocalist Diane Hubka to inquire about the welfare of several mutual Japanese friends. Hubka suggested the multi-artist CD idea. Reed immediately reached out to current and former SSJ artists and received unilateral support for the idea. Almost all have either toured Japan or gained career support through Japanese reissues of their work. All currently reside in California. The artists were welcome to choose whatever song they preferred, with one caveat: Reed wanted the album to be thematically upbeat, ideally filled with selections that reinforced cross-cultural empathy.

Sue Raney, teamed with Alan Broadbent, opens with a lilting blend of “Blues Skies” and “On a Clear Day You Can See Forever.” Broadbent then takes a solo spin through “Sweet and Lovely.” Johnny Holiday, together with his frequent recording mate, saxophonist Sam Most, offers a rousing “Strike Up the Band,” made all the more delightful thanks to Most’s reedy vocal contributions. Former Ray Anthony vocalist Dick Noel, whose six-decade career has produced only two albums under his own name, offers a sweet rendition of Johnny Mercer’s “Dream.” Pinky Winters, who reignited her career a decade or so ago and has been recording steadily since, adds a stirring “You’ll Never Walk Alone.” Sixties pop crooner and Sinatra acolyte Frankie Randall sounds sprightly as ever on “The Wave,” which, not to be confused with Jobim’s “Wave,” is a new tune that speaks directly to the disaster and the courage that followed in its wake. Randall wrote it expressly for the album.

But From California With Love is not solely the purview of septuagenarian artists. Singer/guitarist Hubka (whose most recent album is the SSJ release I Like It Here: Live in Tokyo), accompanied by Dan Sawyer on ukulele, contributes a shimmering “Sweet Happy Life.” Leslie Lewis, often linked with the Gerald Hagen Trio, teams with pianist Hagen for a gorgeously muted “Skylark.” Likewise Tierney Sutton, who hasn’t recorded in years without bandmates Christian Jacob, Ray Brinker, Kevin Axt and Trey Henry, takes a duo outing with pianist Jacob for a tenderly haunting “Beautiful Love.” Jacob also provides a stunning solo interpretation of “Ue Wo Muite Arukou” (popularized in 1963 by Japanese vocalist Kyu Sakamoto and released as “Sukiyaki” for the American market-a rather preposterous renaming, since the Japanese title actually translates as “I look up when I walk”).

But it is studio pianist Jim Cox, whose immense list of credits includes sessions with Barbra Streisand, Elton John, Willie Nelson, Burt Bacharach and Robbie Williams, who gets the most play. It is Cox behind Winters on “You’ll Never Walk Alone.” He also supports vocalist Kurt Reichenbach (who also designed the album cover) on a superbly understated “Here’s to Life,” and is alone in the spotlight for a majestic rendering of “We Can Work It Out.”

There is also a 13th track, the only one that veers from the all-Californians mandate. Contributed by Chris Connor’s longtime manager Lori Muscarelle, it is a 1987 recording of Connor performing “I Feel a Song Coming On” at the Tralfamadore Café in Buffalo, N.Y. The sound quality is less than great, and the track is less than a minute-and-a-half long, but its rarity makes it a valuable addition.

From California With Love is currently available (CD or download) from CD Baby.

If you’d like to share your comments about From California With Love, or have suggestions for future installments of Hearing Voices, please e-mail [email protected] I can also be followed on Twitter @CWLoudon.

Organ trios and quartets were ubiquitous by the mid-1960s. In African American neighborhood bars and clubs up and down the East Coast, throughout the Rust … END_OF_DOCUMENT_TOKEN_TO_BE_REPLACED

Terence Blanchard looked around the restaurant table and launched into a gentle sermon about jazz education in Detroit that was part homily, part pep talk, … END_OF_DOCUMENT_TOKEN_TO_BE_REPLACED

Creating a program of solo piano music is the ultimate challenge for any improvising pianist. The music on my latest album, Ways of Disappearing (Sunnyside), … END_OF_DOCUMENT_TOKEN_TO_BE_REPLACED

First the good news: As you can see in our annual Festival Guide, there are plenty of jazz festivals scheduled to happen around the world … END_OF_DOCUMENT_TOKEN_TO_BE_REPLACED