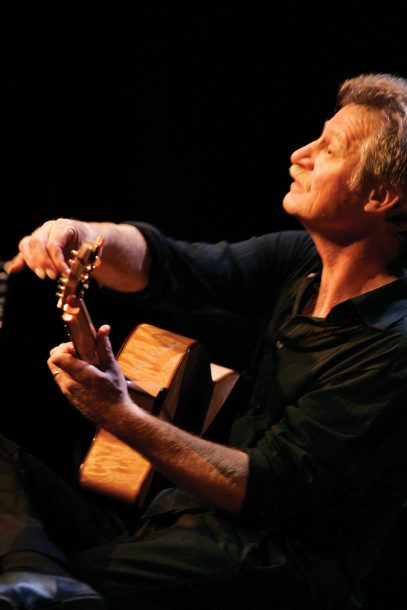 Talk about doing it old school style. This is more like doing it old movie style. In the tradition of the silent movie era, guitarist Alex de Grassi will perform his score live for influential Japanese filmmaker Yasujiro Ozu’s A Story of Floating Weeds at the Columbia Festival of the Arts on Thursday, June 17, 2010. The screening and performance will be held at Smith Theater at Howard Community College in Columbia, Md. The silent film was originally made in 1934 and the filmmaker is considered a major influence on contemporary directors such as Martin Scorcese, Wim Wenders and Jim Jarmusch.

De Grassi, who has had a long career as a recording artist with Windham Hill and RCA Records and now releases albums on his own Tropo label, is not exactly reliving his own childhood in the movie theaters, because as a baby-boomer he saw the great silent movies by Chaplin and Keaton and company with recorded soundtracks, rather than accompanied by a live piano player or organist. And he had only a little experience doing soundtracks for films. “I had done a couple little small things,” he says. “I did a short art film in the early 80s, guys just out of film school and on a shoestring budget and it went to festivals and got a few little prizes. Then I did some documentary things for WGBH in Boston and Channel 4 in England. Nothing huge. I remember after I did a little bit of that in the mid-80s, I asked my attorney in LA, ‘How do I get more into this business?’ I was living in San Francisco at the time. He said, ‘Well, the first thing you have to do is move to LA.’ I just went, naaah. I didn’t pursue it very hard. But I have been enjoying doing this.”

Taking up a brass instrument comes with specific difficulties in terms of development and maintenance. Entering the jazz sphere adds different weight and dimensions to … END_OF_DOCUMENT_TOKEN_TO_BE_REPLACED

You may notice a few changes in this issue of JazzTimes. Our design team has been hard at work again, coming up with a revised … END_OF_DOCUMENT_TOKEN_TO_BE_REPLACED

The pipa—a four-stringed, lute-like instrument—has a history in Chinese traditional music stretching back nearly 2,000 years, at least to the Han Dynasty. The instrument’s legacy … END_OF_DOCUMENT_TOKEN_TO_BE_REPLACED