Skip to content
Become a member and get exclusive access to articles, live sessions and more!
Start Your Free Trial
Home > Features > Great Scott: The Multifaceted Genius of Bobby Scott 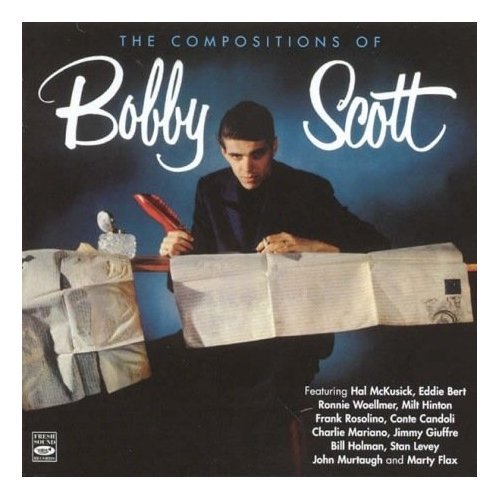 Bobby Scott was the Orson Welles of jazz. His prodigious talents, largely realized at a remarkably early age, were manifold: vocalist, pianist, vibraphonist and composer. He was an equally accomplished arranger, and could also play cello, bass, clarinet and accordion. Yet, unlike the outsized Welles whose genius was (and remains) loudly trumpeted, Scott never achieved more than a smidgen of the fame he deserved, his legacy now all but forgotten. Mention, for instance, his marvelous vocal capabilities and most people assume you mean either Jimmy Scott or Bobby Short.

A native New Yorker, born in 1937, Scott was classically trained (among his teachers was Edward Moritz, a former student of Debussy) but developed a youthful passion for jazz. By age eleven he was playing piano professionally and spent portions of his teen years touring with Tony Scott (no relation), Louis Prima and Gene Krupa, with whom he cut a few sides in the early 1950s.

Striking out on his own in 1954, he signed with Bethlehem, where he recorded exclusively as a pianist, releasing two boldly imaginative volumes ofThe Compositions of Bobby Scott. Like Jackie Paris and other exceptional jazz artists who never quite earned wide enough public acceptance, Scott’s subsequent label affiliations shifted frequently. Between ’56 and ’64, he recorded for ABC-Paramount, Hallmark, Verve, Atlantic and Mercury. Later in his career, he added Warner, Columbia and Musicmasters to the list.

Though his sole ABC-Paramount album, Scott Free, was an entirely instrumental affair – a blend of standards and originals featuring Scott on both piano and vibes – it was during his brief ABC tenure that listeners first became acquainted with him as a singer. The 1956 single “Chain Gang” (not to be confused with the Sam Cooke tune of the same name, from four years later) provided Scott his sole chart hit, rising to number 13, and inaccurately casting him as a bluesy wailer.

Scott’s true voice – relaxed, slightly raspy, with distinct suggestions of Mel Tormé – took center stage when he moved to Verve in 1958. His first Verve release, Bobby Scott Sings the Best of Lerner and Loewe, numbers among the few of his vocal efforts that has surfaced on CD (reissued in Japan and currently available at www.cdbanq.com). A lush, romantic album, it includes selections from My Fair Lady, Brigadoon and Gigi, but is particularly noteworthy because Scott covers four tunes from the songwriting team’s lesser-known Paint Your Wagon, including the lovely, lilting “I Talk to the Trees.”

Scott immediately followed Lerner and Loewe with Serenata, an instrumental album of mostly standards, then, in 1959, saluted another major theatrical composer. The title notwithstanding, Bobby Scott Plays the Music of Leonard Bernstein does feature vocals (the lyrics courtesy of Comden, Green and Sondheim), and includes material from West Side Story, On the Town and Wonderful Town.

In 1960, Scott began teaching music theory and harmony and returned to his studies under Moritz. He also signed with Atlantic, where, in addition to releasing a trio of albums under his own name, he worked with other artists, notably Bobby Darin, arranging and conducting the Darin albums It’s You or No One, Winners and The 25th Day of December.

It was during this period that Scott composed his first major hit, the theme for the 1960 Broadway production of the British play A Taste of Honey. The song, which earned Scott a Grammy Award for Best Instrumental Theme, was again featured in the 1961 film version starring Rita Tushingham, and Scott constructed an entire concept album, also entitled A Taste of Honey, around the storyline.

That same year, Scott released The Compleat Musician, a superb vocal collection of ballads (“How Are Things In Glocca Morra, “Lush Life,” “It Happens Every Spring”) and lively swingers (“You’re the Top,” “The Trolley Song”). It also includes two Scott originals – the turbulent “Prison Yard” and thundering “Ironsided Train” – that, though sharply inconsistent with the rest of the material (and surely jarring to listeners at the time), are masterfully vibrant compositions. Scott’s A Taste of Honey and The Compleat Musician were reissued by Collectables on a twofer CD which is still widely available.

Around 1962, Scott entered one of the few stable periods of his career, serving for several years as a staff producer at Mercury records and working extensively with Quincy Jones. Scott can he heard on Quintessence, Big Band Bossa Nova, Quincy Plays for Pussycats and other Jones albums of the period, and also arranged and conducted Jackie Paris’ The Song Is Paris (released on Impulse!). His own Mercury output spanned four albums: the vocal releases When the Feeling Hits You (including a blistering cover of the title tune and a sensational version of “Moanin'”) and 108 Pounds of Trouble, comprised of original compositions; the high-concept instrumental album Joyful Noises and; I Had A Ball, featuring Michel Legrand and billed as “a jazz view of the new Broadway hit,” though the titular stage show, starring Richard Kiley and Buddy Hackett, was only a minor success with a limpid score by Jack Lawrence and Stan Freeman that failed to produce a single memorable song.

Later in the ’60s he worked on albums for a wide assortment of artists, including landmark releases from Wes Montgomery (Movin’ Wes) and Luiz Bonfá (Braziliana). As the decade drew to a close, another Scott composition, “He Ain’t Heavy, He’s My Brother” became a blockbuster hit, first for The Hollies and then for Neil Diamond. Scott signed with Warner Brothers for a single album, 1971’s Robert William Scott, which included “He Ain’t Heavy” and his only vocal rendition of “A Taste of Honey” (the lyrics had been added by Ric Marlow in the early ’60s). Later in the ’70s he recorded two obscure albums for Columbia, My Heart In My Hands and Forecast: Rain with Sunny Skies, the latter including a stunning “Here, There and Everywhere” (perhaps a thank you nod to Lennon and McCartney, who had included “A Taste of Honey” on the Beatles’ Please Please Me).

In 1989, Scott enjoyed a very brief recording resurgence, shaping one of his best albums, For Sentimental Reasons for Musicmasters. Thanks to a lifetime of heavy smoking, his vocal capabilities were significantly diminished, and yet the hazy gruffness seems ideally suited to this elegant Nat King Cole tribute (his handling of “I Keep Going Back to Joe’s” and “Nature Boy” are standouts). As always, Scott accompanies himself on piano, with Bucky Pizzarelli on guitar, Steve La Spina on bass and Ronnie Zito and Jimmy Young splitting drumming duties.

Scott managed one more album, 1990’s Slowly, for Musicmasters. His voice is far weaker, often barely a whisper. But, again working alongside Pizzarelli and La Spina (with drummer Paul Jost), he manages to shape tender treatments of “When I Fall In Love,” Am I Blue” and “Jean,” and you can sense his dimmed but cheerful smile throughout Paul Williams’ charming “The Rainbow Connection.” That same year, on November 5, Scott succumbed to lung cancer. He was only 53.

Apart from the Collectables twofer, the pricey Lerner and Loewe import and the two career-ending (and increasingly difficult to find) Musicmasters albums, far too little of Scott’s work has surfaced on CD: none of the Mercury material, neither of the Columbia albums, nothing from ABC-Paramount. It would be especially great to see a Complete Bobby Scott on Verve that includes all three Verve albums, perhaps as a future addition to the label’s ongoing series of slickly packaged sets for Hip-O Select.

Organ trios and quartets were ubiquitous by the mid-1960s. In African American neighborhood bars and clubs up and down the East Coast, throughout the Rust … END_OF_DOCUMENT_TOKEN_TO_BE_REPLACED

Terence Blanchard looked around the restaurant table and launched into a gentle sermon about jazz education in Detroit that was part homily, part pep talk, … END_OF_DOCUMENT_TOKEN_TO_BE_REPLACED

Creating a program of solo piano music is the ultimate challenge for any improvising pianist. The music on my latest album, Ways of Disappearing (Sunnyside), … END_OF_DOCUMENT_TOKEN_TO_BE_REPLACED

First the good news: As you can see in our annual Festival Guide, there are plenty of jazz festivals scheduled to happen around the world … END_OF_DOCUMENT_TOKEN_TO_BE_REPLACED