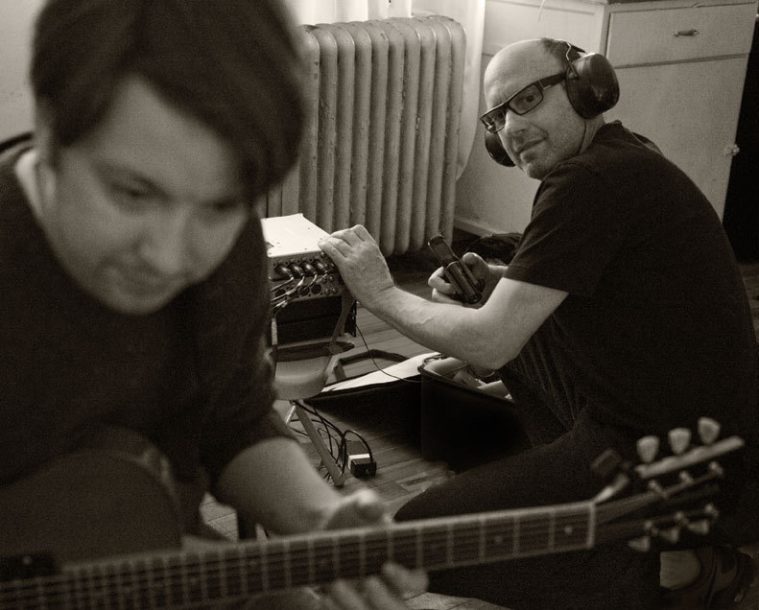 Jimmy Katz and Lage Lund during a remote session in Brooklyn

The most prodigious “doubler” in jazz may not be a musician. Many players are proficient on more than one instrument, but Jimmy Katz is the only jazz photographer who moonlights as a recording engineer. And he has world-class chops in both art forms.

In the jazz world, Katz’s photographs are hard to miss. Over the past 20 years his images have been featured in the packaging of more than 300 albums, and he has shot more than 120 magazine covers, including many for JazzTimes. Five years ago he began working as an engineer, specializing in live recordings in New York clubs. He has done many of the albums on the SmallsLIVE label, in addition to recordings of the Frank Kimbrough Trio (Live at Kitano, Palmetto), Miles Okazaki at the Jazz Gallery (Figurations, Sunnyside) and the Lage Lund Trio at the Bar Next Door (Small Club, Big City, TuneCore, download only).

On Ralph Lalama & BopJuice’s Live at Smalls, you hear-and feel-the crowd close around you. You are there in Greenwich Village, downstairs at 183 West 10th, in the murmuring hang. Lalama’s trio is burning. But the nuances of the leader’s tenor saxophone pronunciation, the transient attacks of Clifford Barbaro’s sticks on cymbals, and the bottom octave of Joel Forbes’ bass are all rendered in studio-quality resolution.

Katz grew up in New York and became a passionate jazz fan in his teens. His burgeoning record collection (eventually 4,000 albums deep) led him to seek out superior playback equipment, which led to an interest in how recordings are made. Eventually his day job afforded him invaluable lessons in audio. “From shooting so many sessions in studios,” he explains, “I got to know the most important jazz engineers: Rudy Van Gelder, Jim Anderson, Joe Ferla, James Farber. I observed what they were doing, but I knew that what interested me was live jazz. Often I would hear a band live and then check out their record and think, ‘Well, it’s great, but what I heard live was more inspired, more creative, more profound.’ I wanted to capture such moments.”

Another important person in Katz’s story is his friend and mentor Marc D. Rusch, the engineer for the CIMP label. Rusch is legendary in the audiophile community for his live-to-two-track recordings of avant-garde jazz. “Marc is a ferocious engineer,” Katz says. “He taught me a lot about live recording and helped me get started.”

Katz describes himself as “completely obsessive and detail oriented. I build my own carbon-fiber wand mic stands, to reduce vibration. I keep my cables as short as possible. I use exotic high-end condenser microphones. Pearl mics from Sweden are extraordinarily transparent. I also like [Microtech] Gefell and Schoeps. I don’t use dynamic mic’s except in emergencies. They’re great for isolation, but they’re not as transparent.” (Katz sold three cymbals signed by Elvin Jones to fund some of his costly mic purchases.)

He usually records around 16 tracks (which means 16 microphones) and uses PreSonus Studio One software. “But,” he clarifies, “what I’m essentially trying to do is a stereo recording, with two mics in front of the band about 8 inches apart, and then add the ‘spices’ of spot mic’s. I’m trying to use as few microphones as possible in the final mix. If I’ve done a good job and the band plays in balance, I’m really going to rely on that stereo pair and maybe mix in a little bit of a few other microphones.”

For all his fixation on sonic quality, Katz has to be practical because he works in clubs: “I use Kevlar-coated Schoeps cable because it sounds good, you can walk on it, and it’s thin and light. I’ve got to be able to take all my stuff on the subway. I love tube gear but I don’t use it on location because it can be fragile. I need everything to work the first time, because I won’t get a second chance.”

The fact that Katz uses condenser mics, which bleed, rather than dynamic mics, which can isolate sound sources, means that correct positioning of musicians and microphones is critical. “My approach puts a lot of responsibility on the musicians,” he says. “They have to play in balance. I don’t have isolation booths like in a studio. I can’t make many level adjustments in post-production. My head is into this whole idea of trying to capture a real event without editorializing. It’s all about intimacy.”

Musicians think Katz is succeeding. As Lage Lund says, “Jimmy’s ability to get the sound of a band and the sound of a room has been totally revolutionary to me.”

If this praise continues, Jimmy Katz could become known as the engineer who moonlights as a photographer.

First the good news: As you can see in our annual Festival Guide, there are plenty of jazz festivals scheduled to happen around the world … END_OF_DOCUMENT_TOKEN_TO_BE_REPLACED

Steve Lacy was once a brilliant bebop player. Yet conventional wisdom says the opposite. Many have long argued that a key to the innovative soprano … END_OF_DOCUMENT_TOKEN_TO_BE_REPLACED

What is a jazz film? Does it have to be a film about jazz and the people who play it? Or can it also be … END_OF_DOCUMENT_TOKEN_TO_BE_REPLACED

Films that tell stories about jazz open a revealing window on the place and perception of the music within popular culture. See Kevin Whitehead’s compelling … END_OF_DOCUMENT_TOKEN_TO_BE_REPLACED