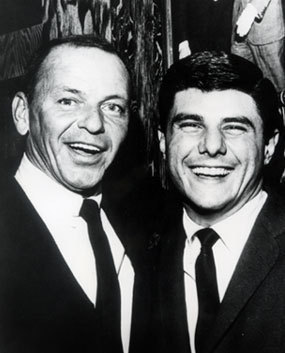 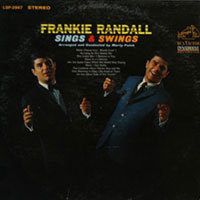 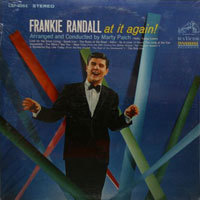 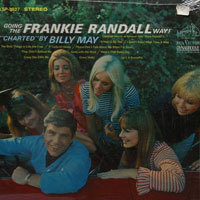 With the advent and subsequent explosion of rock ‘n’ roll in the late 1950s and early ’60s, and the concurrent shift to teenagers as music’s prime consumers, it was a precarious time for emerging jazz and pop vocalists. Some – Nancy Wilson, Jack Jones, Steve Lawrence, Eydie Gormé – not only weathered the storm but prospered in spite of it. Others, often of equal merit, were left on the sidelines. Principal among the latter group is Frankie Randall.

Randall’s failed ignition wasn’t for lack of opportunity or support. He was, throughout the 1960s, backed by two major labels; first, briefly, by Roulette, then more fervently by RCA. Nor was it for lack of talent. In his heyday, Randall sounded remarkably like Lawrence, rivaled Jones’ polished authority and could swing like Bobby Darin. And therein surely lies the problem. Lawrence, Jones and Darin were all well established by the time Randall entered their arena. There was no room, nor any real desire, for another vocal doppelganger, even one as gifted as Randall. Also, Lawrence, Jones and Darin were all bolstered by big chart hits, providing them with valuable crossover appeal. Stylistically they were cocktail hour fare, but occasionally caught the ears of the soda pop set. Randall, though RCA pushed out a steady stream of singles, never so much as grazed Billboard‘s Hot 100.

Today, at age 72, Randall is still active, regularly churning out albums and maintaining a healthy schedule on the club circuit. A particular favorite in Atlantic City, he spent much of the 1980s as resident vocalist at the Golden Nugget (after a three-week run in ’82, Randall was offered an open engagement by casino owner Steve Wynn). During his tenure with Wynn, he also served as the casino’s Entertainment Director and subsequently advanced to Vice President of Bally’s Grand Hotel and Casino. After a decade in the casino business, he abandoned the executive offices and returned to the rigors and uncertainty of touring. In 1997, Sinatra bestowed many of his classic arrangements to Randall, resulting in his long-running “Tribute to Sinatra” stage show.

This year marks the 50th anniversary of Randall’s debut album. So it seems an ideal, if overdue, time to revisit his formative years. Like Sinatra, he is a native New Jerseyite, born Frank Joseph Lisbona on January 11, 1938 (precisely three days before Jack Jones arrived on the opposite coast, in Hollywood). Randall earned a psychology degree from the University of New Jersey, but opted after graduation to pursue his dream of a show business career. He landed at Jilly’s, playing piano and singing for the cognoscenti who crowded the fabled Manhattan nightspot. Principal among them was proprietor Jilly Rizzo’s pal, Sinatra. According to Randall’s website, Sinatra was impressed by the young performer, citing him as “a marvelous talent who sings great and plays more piano than there are keys.”

Randall claims he made his first album, for Roulette, at age 18. But Relax’n with Chico Randall (“Chico” was a childhood nickname that he originally adopted as part of his stage moniker) was released in 1960, when Randall was 22. It is a solid album, featuring smoky renditions of such standards as “Spring Is Here,” “Love Is Here to Stay” and “When I Fall In Love.” But the focus is squarely on Randall’s playing. His vocals, too obviously modeled on Chet Baker, are both under-baked and underwhelming.

With the move to RCA, Randall was clearly being groomed for big-time stardom. For his 1964 RCA debut, Frankie Randall Sings & Swings, he remained squarely in Jones and Lawrence territory, focusing primarily on Broadway and Hollywood tunes of the day wrapped in sizzling Marty Paich arrangements. His hard-swinging “She Loves Me” sets the tone for a dozen like-minded standards. He handles the outré sophistication of “When the World Was Young” with the same theatricality as Peggy Lee. His “Once In A Lifetime” is as rich and robust as Mel Tormé’s, and his distinctly Lawrence-esque “More” is undeniably lovely. Best is his playful, staccato scurry through Richard Rodgers’ “Mimi.”

Randall’s 1965 follow-up, At It Again!, again featured a dozen Paich arrangements of durable standards. The results are equally fine. Particularly strong are Randall’s handlings of “I Stay Too Long at the Fair,” the execution of its escalating discontent reminiscent of the young Mark Murphy, and “The Rules of the Road,” delivered with world-weary swagger.

In ’66, he swapped Paich for the brassier Billy May for Going the Frankie Randall Way!, its cover featuring a clean-cut Randall entertaining a convertible full of co-eds. Highlights include a stirring, if strings-heavy, treatment of “Manhã de Carnival” and a swingin’, Darin-worthy “A Taste of Honey.”

The best of Randall’s RCA output, I Remember You (also from ’66), lacked the marquee value of Paich or May, but suggests significant vocal maturity. An unaccredited quote on the LP’s back cover enthuses that “he sings good songs the way they should be sung.” And, indeed, he does. From a loose-limbed “I’ll Be Seeing You” to a bemused “Thanks for the Memory,” Randall hovers just south of Sinatra’s panache.

Randall recorded one more album for RCA before he and the label parted ways in the late 1960s. The Mods and the Pops, released in 1968, lived up to the ludicrousness of its title. A too-late attempt to contemporize Randall, it featured crooner-style renderings of such ill-fitting tunes as Jay & the Techniques’ bubblegum hit “Keep the Ball Rollin'” and The Who rock anthem “I Can See for Miles.” Understandably it not only disappeared without a trace, but also hastened the downward spiral of Randall career.

Among the dozen or more singles Randall released during his RCA years, there are a couple of interesting footnotes. His isn’t the only vocal rendition of the theme from the otherworldly sitcom Bewitched. Lee and Lawrence both covered the sugary ditty crafted by Howard and Greenfield and Jack Keller. But Randall does seem to be the only singer to have also recorded “Samantha” (not to be confused with “I Love You, Samantha,” written by Cole Porter for High Society), another Greenfield/Keller confection based on the hit TV series. More notable for trivia buffs, Randall was, in 1966, among the very few singers to record a number from the Bob Merrill score for the disastrous musical adaptation of Breakfast at Tiffany’s which, with Mary Tyler Moore in the role made famous by Audrey Hepburn, was shuttered before it reached Broadway. Randall sings one of the show’s better tunes, “Holly Golightly,” a sprightly paean to its free-spirited heroine.

Apart from his better-left-buried The Mods and the Pops, all of Randall’s RCA albums have been re-issued on CD and remain in print. Each includes one bonus track: “Bewitched” on Sings & Swing; “Samantha” on At It Again!; the bouncy “Rosemarie” (remarkably similar to Darin’s “Clementine”) on Going the Randall Way!; and, most delightfully, a previously unreleased “Polka Dots and Moonbeams” on I Remember You. Apart from a Paich-themed compilation that combines portions of Sings & Swings and At It Again!, issued by Spain’s Fresh Sounds label in 1998, they’re only available as Japanese imports, but are well worth the hefty price tags.

If you’d like to share your comments about Frankie Randall, or have suggestions for future installments of Hearing Voices, please direct your email to [email protected]

Organ trios and quartets were ubiquitous by the mid-1960s. In African American neighborhood bars and clubs up and down the East Coast, throughout the Rust … END_OF_DOCUMENT_TOKEN_TO_BE_REPLACED

Terence Blanchard looked around the restaurant table and launched into a gentle sermon about jazz education in Detroit that was part homily, part pep talk, … END_OF_DOCUMENT_TOKEN_TO_BE_REPLACED

Creating a program of solo piano music is the ultimate challenge for any improvising pianist. The music on my latest album, Ways of Disappearing (Sunnyside), … END_OF_DOCUMENT_TOKEN_TO_BE_REPLACED

First the good news: As you can see in our annual Festival Guide, there are plenty of jazz festivals scheduled to happen around the world … END_OF_DOCUMENT_TOKEN_TO_BE_REPLACED