Skip to content
Become a member and get exclusive access to articles, live sessions and more!
Start Your Free Trial
Home > Features > A Fine Arts Museum’s Tribute to Nonpareil Miles 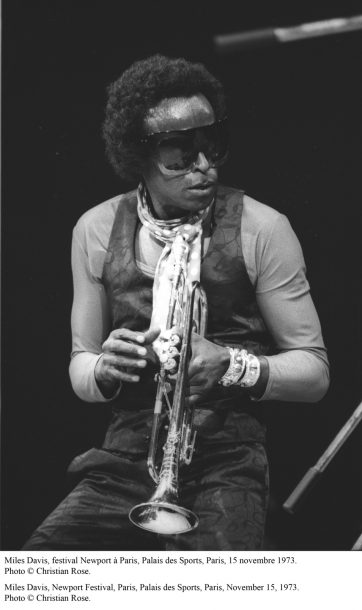 Miles Davis, by Christian Rose, from We Want Miles exhibition 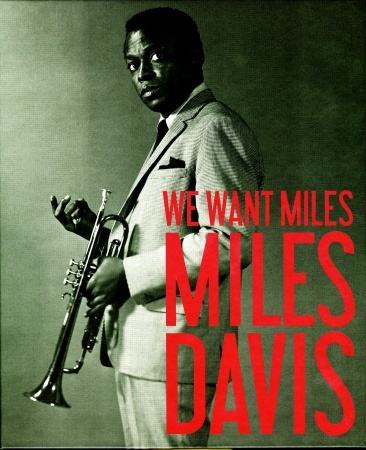 When I lived in Boston eons ago, the Museum of Fine Arts was within walking distance, and I often visited to get high on such paintings as a Renoir of a young couple in what looked like a New Orleans-style slow dance. I’d stand there fantasizing about taking the man’s place in the painting, but I never expected to find anything of jazz in this legendary museum’s exhibitions. Nor have I heard of jazz as a fine art in any of the other museums around the country. I have been at jazz concerts at the Metropolitan Museum of Art, but there’s nothing of Louis, Duke, Pres, Bix or Trane in the galleries there.

Suddenly, however, in a very prestigious museum of fine arts-having opened in April and continuing until Aug. 29-there is a stunning media exhibition on someone the museum accurately calls “one of the jazz world’s greatest innovators.”

Coinciding with the event is a very large-size, hardback catalog, on the cover of which-characteristically sizing you up skeptically-is Miles Davis. The book and exhibition are titled “We Want Miles: Miles Davis vs. Jazz.” And nowhere else have I seen so much of Miles, from his boyhood on.

Miles and I were friends-until Bitches Brew. He never forgave me for not turning handsprings over his venture into electronics. I felt Miles was electrifying without the added wattage. But since he was always trying something new, and always expecting attention, I’m sure he would have been delighted by this polyrhythmic, visual and sonic odyssey of his life.

This tribute to the always-alive music of Miles is not in an American museum; the ones here are not yet hip to jazz as an art. This awakening challenge to our treasures of high art is mounted by the Montreal Museum of Fine Arts. It’s the first one there, but it has been brewing for a long time. The MMFA’s director, Nathalie Bondil, has a long-term relationship with the Musée de la Musique in Paris, which originally conceived the exhibit, and Bondil is much involved, as she puts it, in “cross-roading visual art and music.”

Miles was a painter, and the exhibition shows some of his visual improvisations. Also, along with his original manuscripts and scores, there are horns he played. And dig this from Cecilia Bonn, the museum’s communications consultant: “Small chambers placed throughout the installation in the form of the ‘mutes’ Miles used are among the design initiatives to ensure optimal acoustic conditions. And twenty listening stations will enable visitors to immerse themselves in Miles’ multiple musical currents.” Also, you’ll be able to hear Miles “live” in “a series of large-screen projections featuring clips and full-length footage from such concert performances as the 1985 Montreal International Jazz Festival.”

My unsolicited suggestion to Nathalie Bondil is that she invite museum directors in the United States to come to Montreal and immerse themselves in the microcosm of Miles. Imagine such resourceful, imaginative exhibitions on Louis Armstrong, Duke Ellington, Count Basie, Fats Waller, Thelonious Monk, Dizzy Gillespie, Billie Holiday, Lester Young, Jack Teagarden, John Coltrane, Pee Wee Russell-you can add the names. And throughout this country-with music classes expunged from so many schools by No Child Left Behind-fine arts museums correlating sight, sound and American history shaped by jazz could invite public school classes to learn more about swinging the arts.

The kids would also learn something about the thrust and the often-exhilarating surprise of creation, as shown in the catalog in these juxtaposed quotes:

Pablo Picasso: “In painting you can try anything. As long as you never do anything over again.”
Miles Davis: “Now, nothing in music and sounds is ‘wrong.’ You can hit anything, any kind of chord. … Music is wide open for anything.”
Pablo Picasso: “You see me here, and yet I’ve already changed. I’m already somewhere else.”
Miles Davis: “Nothing is out of the question the way I think and live my life. I’m always thinking about creating. My future starts when I wake up every morning.”

The catalog further contributes permanently to jazz history with the deeply searching and knowledgeable text by, among others, Franck Bergerot, editor in chief of France’s Jazz magazine, writer of many Miles Davis liner notes, and coordinator of the first volumes of Miles’ complete works, released by the Masters of Jazz label.

Among the photographs, most of which are new to me, are those depicting Miles as a boy and Miles as the youngest member of trumpeter Eddie Randle’s Blue Devils, the house band at the Rhumboogie Club in East St. Louis. The evolving Miles became music director of the Blue Devils and was in charge of organizing rehearsals.

From the text about a time in his life when Miles had seemed to stop growing: “a young white cat by the name of Chet Baker was named best trumpet player for 1953; and while in Detroit, Miles heard the playing of Clifford Brown, the rising black trumpet star. In March, 1954, Davis was back in New York determined to make … a fresh start.

“However, once again his trumpet was in hock. He was playing Art Farmer’s trumpet, and Farmer accompanied him to make sure his trumpet did not vanish.”

I’d never heard that before, but now I have, thanks to the Montreal Museum of Fine Arts. According to Tourism Montreal, “the Museum is Montreal’s top cultural destination … and close to 100,000 people take part annually in its educational and cultural activities.” Now it’s also a swinging institution, revealing that in a vital area of the arts, America’s museums are, by contrast, culturally disadvantaged. I hope Montreal’s “We Want Miles” becomes a traveling exhibition south of the border. Any museum directors interested?

Organ trios and quartets were ubiquitous by the mid-1960s. In African American neighborhood bars and clubs up and down the East Coast, throughout the Rust … END_OF_DOCUMENT_TOKEN_TO_BE_REPLACED

Terence Blanchard looked around the restaurant table and launched into a gentle sermon about jazz education in Detroit that was part homily, part pep talk, … END_OF_DOCUMENT_TOKEN_TO_BE_REPLACED

Creating a program of solo piano music is the ultimate challenge for any improvising pianist. The music on my latest album, Ways of Disappearing (Sunnyside), … END_OF_DOCUMENT_TOKEN_TO_BE_REPLACED

First the good news: As you can see in our annual Festival Guide, there are plenty of jazz festivals scheduled to happen around the world … END_OF_DOCUMENT_TOKEN_TO_BE_REPLACED