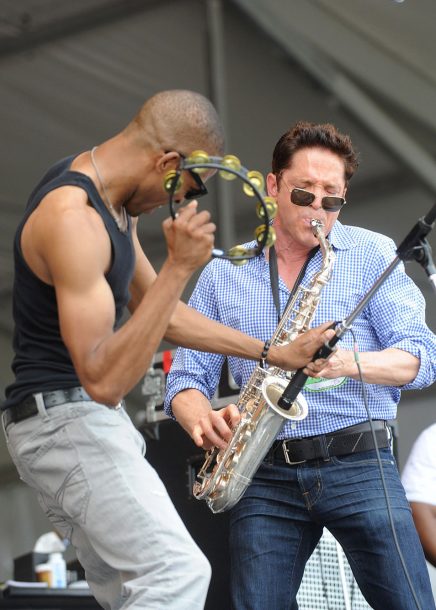 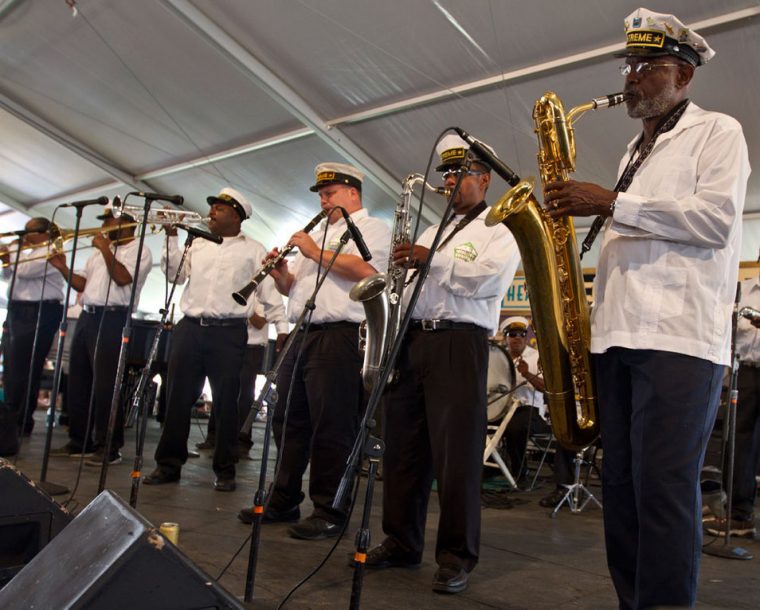 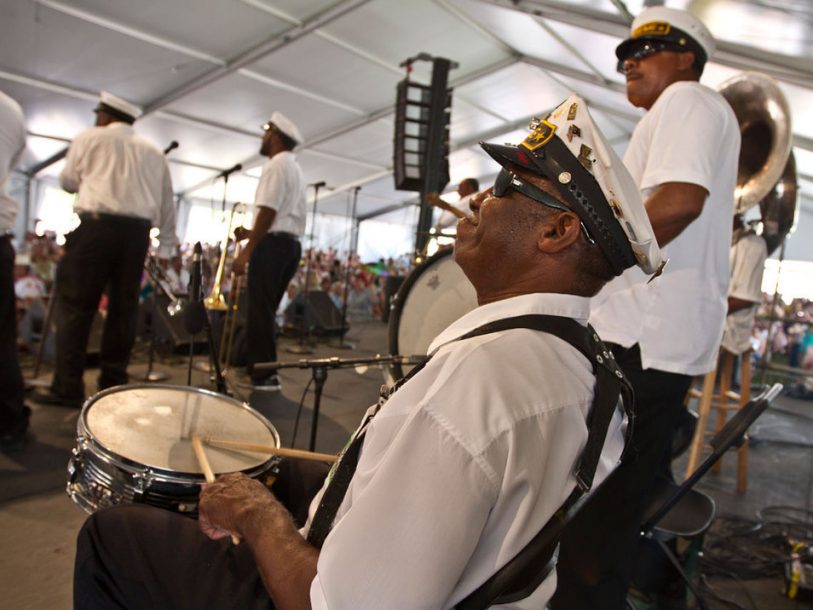 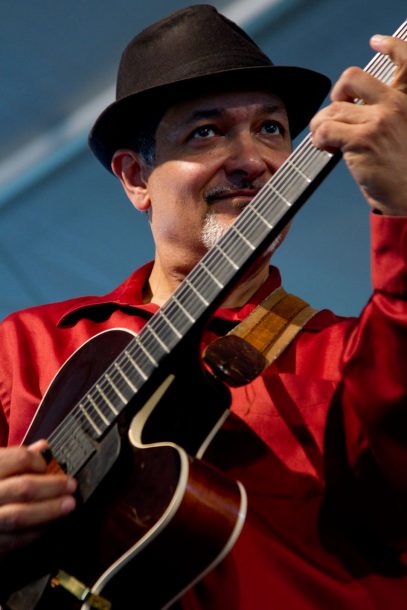 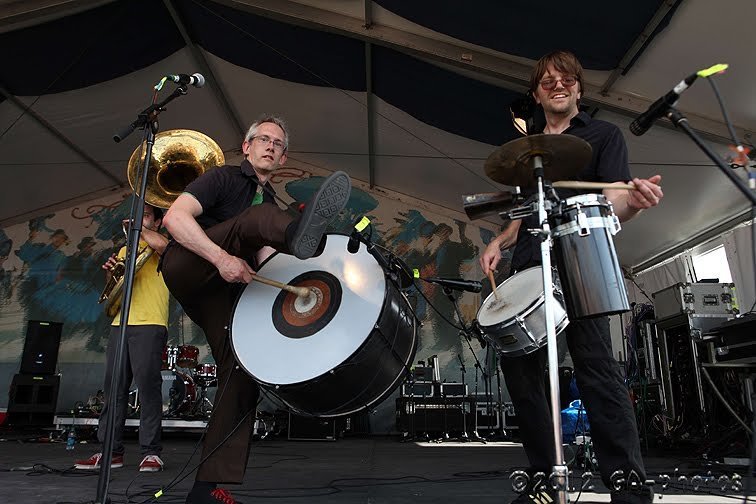 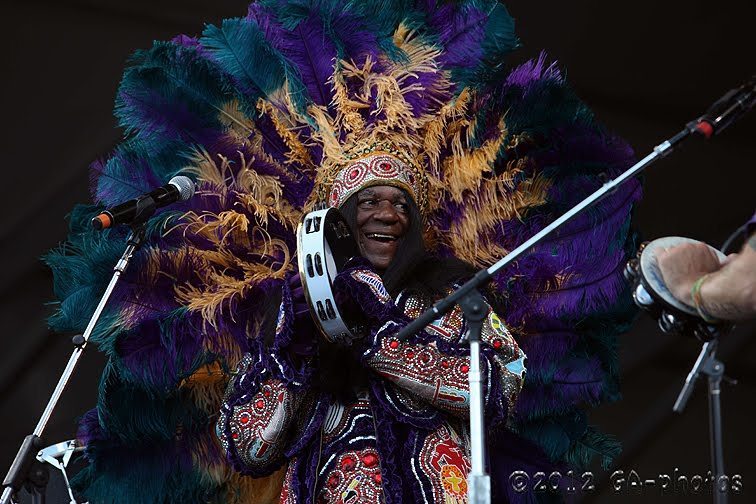 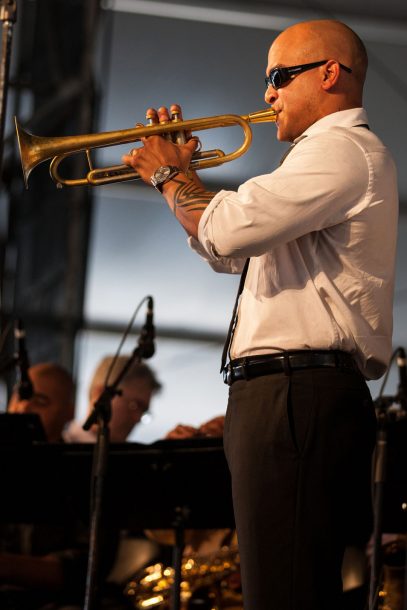 It’s tempting, particularly if you’ve never been, to count New Orleans’ Jazz Fest among the herd of annual warm-weather music fetes. But it’s neither a place to take the pulse of jazz at large (Newport) nor an overwhelming hodgepodge of buzzed-about rock and pop acts (Bonnaroo). Like the city of New Orleans, what Jazz Fest offers is wholly singular; also like its city, it deftly blends its party-hearty atmosphere with cultural education.

On Jazz Fest’s first weekend of two, it was business as usual with better-than-usual weather: highs in the 80s, drifting clouds to periodically hide the sun, not a drop of rain. From around 11 a.m. to 7 p.m. April 27-29, 11 show spaces boasted a peerless range of blues-derived music. Even the requisite main-stage headliners-Bruce Springsteen, in his first Jazz Fest show since his historic post-Katrina performance in 2006; Tom Petty; and the newly reunited Beach Boys, sounding curiously strong-came off as strains of Americana rather than commercial concessions.

Held at the Fair Grounds Race Course, the event’s home since the early ’70s, Jazz Fest is an international tourist attraction that garners its visitors by celebrating itself. Going there expecting A-list modern jazz from all corners of the earth would be missing the point; its real value is that it acts as a one-stop-shop for Louisianan culture. And it truly is a festival: A lot of so-called music festivals are little more than marathon concerts, but Jazz Fest’s extramusical components are things worth savoring. There were exhibits on Mardis Gras Indians and other longstanding local traditions, crafts vendors galore, a stage dedicated to artist interviews, and, this is important, excellent food: solid, affordable representations of traditional New Orleans fare like jambalaya, red beans and rice, and po’boys. (Of Jazz Fest’s many rituals and customs, the $8 hot dog isn’t one.) The Jazz Fest audience-older and informed, fun-loving but well-behaved-is in and of itself a feature.

Last weekend was crowded (though official attendance figures aren’t available yet): You could score a seat in the Jazz and Blues tents if you planned ahead, but by set’s beginning the audiences spread into the sunlight. Due to the sheer volume of acts, head-to-head programming forced you to make tough decisions or do constant laps, hoping to catch at least some of everything you wanted to hear. I opted for the latter.

The Jazz Tent could act as a place of reprieve-from the sun, from the main stage crowds, from the brass-band funk that overtook the air on the main grounds. Again, Jazz Fest isn’t Monterey or Newport, importing the edgiest and “most important” modern jazz from New York and elsewhere; in 2012, the jazz programming mostly celebrated New Orleans and succeeded in pleasing the intelligent but general listenership. On Friday, April 27, the fine saxophonist (or, better yet, multi-instrumentalist) James Rivers sounded stout but skewed corny in the way of repertoire and arranging (“Ave Maria,” on flute, accompanied by synth strings). Better was Stephanie Jordan’s mid-century-styled big-band tribute to Lena Horne and that evening’s closer, Poncho Sanchez’s Latin Jazz Band with guest trumpeter (and NOLA hero) Terence Blanchard. In the context of recent work by Guillermo Klein and Miguel Zenón, two figures taking Latin-infused postbop to new levels of intellectualism, the Sanchez/Blanchard hookup was refreshing: Blanchard played Dizzy to Sanchez’s Chano Pozo, both paying propulsive tribute to the clave. This was an earnest delivery of Afro-Cuban jazz back to its bop-era origins.

On the 28th, New Orleans’ own Evan Christopher and Irvin Mayfield impressed with well-crafted straight-ahead programs. During Christopher’s set, the clarinetist took his state-of-the-art technique to originals and standards like Duke’s “The Mooche,” all underscored with an unmistakable New Orleanian groove courtesy of drummer Shannon Powell, a ubiquitous Jazz Fest presence. The Mayfield-led New Orleans Jazz Orchestra provided a sort of centerpiece for the day and a weekend highlight. Things began with much fanfare: an overture of sorts by the Golden Eagles’ Big Chief Monk Boudreaux and then “The Star-Spangled Banner.” Mayfield is clearly enamored of fellow trumpeter Wynton Marsalis, and the NOJO often felt similar to the Jazz at Lincoln Center band, particularly in the arrangements, which traversed various feels within single charts and gave the soloists plenty of spotlight. (In Wyntonian fashion, Mayfield mostly let his players shine.) Highlights: Evan Christopher’s breathtaking altissimo cries; saxophonist Edward Peterson’s pseudo-New Thing extended techniques; and guest trumpeter Jamil Sharif’s inspired high-note playing. Another guest, Kermit Ruffins, clearly one of New Orleans’ most-loved sons, brought the house down with his folksy vocal on “I’ve Got the World on a String.”

Smooth-jazz celebrity Dave Koz followed Mayfield’s band, and invited onstage as his guest Trombone Shorty. (Shorty has been gaining a lot of momentum at large over the past couple years, but in New Orleans he’s a certified phenomenon.) They played neither Koz’s instrumental pop nor Shorty’s hard-rock-edged funk, opting instead to blow over “Take the ‘A’ Train.” (Both fared well with swinging changes.) The following day on the main stage, Shorty returned the favor and let Koz funk out with the trombonist’s Orleans Avenue. Sunday saw a robust turnout for Ellis Marsalis, who was his usual elegant self. Victor Goines, on tenor and soprano saxes, led his band into a Classic Quartet-esque focus and intensity. The Ramsey Lewis Electric Band, filling in for Dianne Reeves, was grooving and agile and technically imposing-something to experience live for those turned off by the overproduction of Lewis’ recordings. Nicholas Payton’s XXX with drummer Jeff “Tain” Watts and bassist Vicente Archer closed the Jazz Tent on Sunday, and from a distance you might have mistaken the set for one from Robert Glasper. Payton played a lot of Rhodes, convincingly, with a smart neo-soul tint; he also comped for himself one-handed while blowing trumpet with the other. A neat trick, sure, but the results were actually musical.

But I probably spent more time outside the Jazz Tent than in it. Corey Harris and harmonica virtuoso Phil Wiggins staked their claims as the preeminent contemporary interpreters of prewar blues. Slavic Soul Party! took the brass-band tradition to the Balkans; the Soul Rebels applied the brass tradition to pop repertory from Stevie Wonder, the Outhere Brothers and more. The traditional jazz lineup was fabulous and found its home base at the Peoples Health Economy Hall tent. The crowds were leaner there-save for an afternoon slot by the Treme Brass Band-but to hear New Orleanian acts like the Heritage Hall Jazz Band or Don Vappie & the Creole Jazz Serenaders engage in gorgeous collective improv over a two-beat was as cathartic as music listening gets.

Organ trios and quartets were ubiquitous by the mid-1960s. In African American neighborhood bars and clubs up and down the East Coast, throughout the Rust … END_OF_DOCUMENT_TOKEN_TO_BE_REPLACED

Terence Blanchard looked around the restaurant table and launched into a gentle sermon about jazz education in Detroit that was part homily, part pep talk, … END_OF_DOCUMENT_TOKEN_TO_BE_REPLACED

Creating a program of solo piano music is the ultimate challenge for any improvising pianist. The music on my latest album, Ways of Disappearing (Sunnyside), … END_OF_DOCUMENT_TOKEN_TO_BE_REPLACED

First the good news: As you can see in our annual Festival Guide, there are plenty of jazz festivals scheduled to happen around the world … END_OF_DOCUMENT_TOKEN_TO_BE_REPLACED