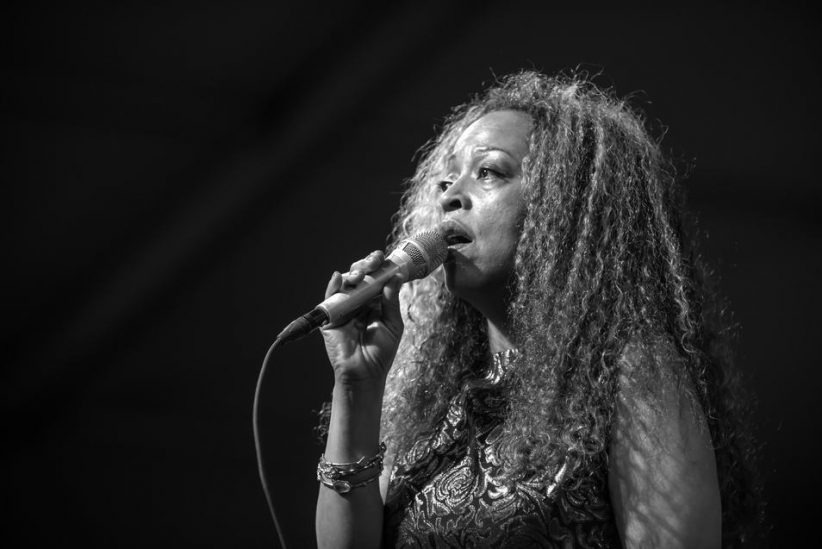 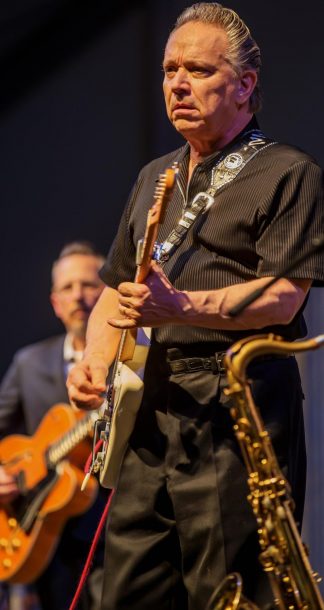 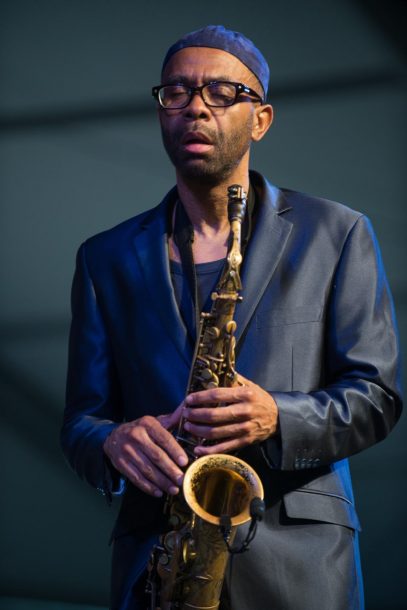 Jazzfest is scheduled to begin its second weekend of 2015 in a few hours, and to look at the schedule is to feel a deep pang of regret that I’m not going to be there. As a “jazz” festival the event has competition, but as a survey of American music it remains peerless. Where else could you skip from Lars Edegran to Kent Jordan to the Tedeschi Trucks Band to Nicholas Payton to Jimmie Vaughan, as I did last opening Friday?

I wrote about the clouds that day, and how merciful they were in the middle of it. Not so on Saturday, when I watched Ellis Marsalis-forgoing his usual trio sets for a fiery quintet outing featuring two powerhouses, trumpeter Ashlin Parker and saxophonist Derek Douget-from just outside the Jazz Tent, withstanding a lunchtime monsoon. But the gusting wind and rain didn’t last forever, becoming less intense throughout the afternoon and vanishing in time for a comfortable evening. If anything the storm proved a point: Jazzfest doesn’t live or die by its weather. I ate my jambalaya in the rain, and it still tasted good.

Also in the Jazz Tent that day, receiving a glorious welcome from her onetime hometown, was Cassandra Wilson, who played from her recent Billie Holiday tribute, Coming Forth by Day. Here was a festival high point early into the seven days: one of the great contemporary singers interpreting classic repertoire through a gauzy, ambient, often unabashedly avant-garde prism-“What a Little Moonlight Can Do,” for one, imagined Lady Day recast into early Quiet Storm with a Lynch-ian twist. “All of Me,” a fantastic piece of songcraft so worn at this point it’s nearly kitsch, was given an arrangement so melancholic it brought to mind “Moonlight Sonata.” Elsewhere there were long passages of atmospheric ensemble interplay-solo sections in which Wilson’s band, featuring avant-Americana guitarist Kevin Breit, perfectly matched here, acted as a smoke machine instead of a series of spotlights. On “Strange Fruit,” there were sections of deconstructive Lower East Side noise, deployed with precision during a nailed-down arrangement. (Wilco and other artful rock bands are great at this, better than jazz bands.) The act that followed Wilson in the Jazz Tent, a quintet fronted by alto saxophonist Kenny Garrett, played to his dependable strengths, through spirit-seeking Impulse!-sounding material, calypso-inflected music and, of course, “Happy People,” which expertly worked the modest crowd into a frenzy. (It’s an unfortunate fact of Jazzfest that the Jazz and Blues Tent headliners receive much smaller crowds than acts that go on during the middle of the day, since so many festgoers leave the area toward day’s end to catch the pop headliners. Garrett deserved to play to the packed 2:30 crowd.)

On Sunday at the Jazz Tent reedist Victor Goines and his band collaborated with the NOLA-based Faubourg String Quartet, in a program billed as “Charlie Parker with Strings.” It ended up encompassing much more than a Bird tribute, going in several directions but with organization and purpose. (Of all the sets I took in, this felt the most special and rehearsed.) Goines began with the Bird concept, covering “Easy to Love” and “Everything Happens to Me” to summon up those classic Verve sides. Then there was Monk, performed by Goines’ band sans strings, as well as Piazzolla’s “Four for Tango” performed by the Faubourg Quartet alone, the Herrmann-and-Hitchcock severity of the piece holding the sprawling audience’s attention. A series of duets, highlighted by pianist Ellis Marsalis and cellist Dr. Jee Yeoun Ko, brought a welcome focus to the social crowd atmosphere. (Put down the beer and listen, it seemed to say, and most obliged.) The Jazz Tent follow-up, a jam featuring New Orleans Center for Creative Arts alumni, found Donald Harrison Jr. astounding with marathon solos that ascended into the altissimo and stayed there longer than most saxophonists could manage. Also on-hand was organ hero Dr. Lonnie Smith, showing the younger players-even Irvin Mayfield-how to construct a narrative solo instead of showing off, on his arrangement of “The Song Is You.” BWB, the contemporary-jazz supergroup featuring trumpeter Rick Braun, saxophonist Kirk Whalum and guitarist Norman Brown, closed the Jazz Tent by reiterating that virtuosity-especially in the case of Brown-can exist in smooth jazz.

But Jazzfest, even more so than most festivals, is about discovery and catching things you might not want to invest time or money in to see at your local concert hall. I’m glad I got to experience 40 or so minutes of Tony Bennett and Lady Gaga, for instance. Backed by an orchestra worthy of an MGM musical, the program moved through duets as well as solo performances-like “Smile” and “The Good Life” for Bennett and “Bang Bang” for Gaga, more Cher than Nancy Sinatra. They both sounded excellent: Bennett still has it, and Gaga can sing-what does it say when we’re amazed that our millionaire pop stars are actually skilled?-though she comes to this not as jazz singer, with that sense of phrasing and patience and storytelling acumen, but as a hybrid of R&B, Vegas cabaret and Barbra Streisand. The whole enterprise worked, but only Bennett’s solo tunes were affecting. Gaga’s keen pop sense cropped up in her multiple costume changes, and the various gowns and shawls were impressive, as if heisted from Planet Hollywood. Still, it can raise a cynic’s ire to see so much wardrobe as some of Louisiana’s finest singers sweat through the same black dress they wore last year.

On that note, let’s mind a local institution. After a few Jazzfests, I look forward to the Louisiana Repertory Jazz Ensemble each year, a crew of classic-jazz enthusiasts who pursue historical purism with the ferocity of a set designer-even playing vintage instruments. Their sets are lessons as well as performances, and their deep-reaching repertoire is consistently fascinating; last year they impressed with the weird, wide-vibrato music of the Sam Morgan Band, and I was pleased to find out on Sunday that a recording of that music is in the works.

Outside the grounds, Irvin Mayfield’s New Orleans Jazz Orchestra played at a gala concert on Friday at its new Central City home, the Peoples Health New Orleans Jazz Market, which is being touted as the city’s first performing arts center dedicated solely to jazz. Obvious comparisons would be to Jazz at Lincoln Center and SFJAZZ, though those aren’t quite fair; this is a terrific and essential project in New Orleans, but it doesn’t boast that sort of scale. Still, Mayfield’s new 340-seat clubhouse was acoustically engineered for jazz, and it sounded sterling; I was amazed at how little of the orchestra was miked during its loose, playful set with guest Dee Dee Bridgewater. A pristine, spacious bar area just outside the theater offers music too. (Look out for a feature on the venue in an upcoming issue of JazzTimes.)

Other favorite nighttime gigs, which are often just as important as what happens at the horse track, included those by a trio of drummer Stanton Moore, organist Robert Walter and guitarist Will Bernard, and the Greyboy Allstars, the funk-jazz quintet that originated in San Diego and features Walter and saxophonist/flutist Karl Denson (and, it’s worth mentioning, given the bang-up job he did with the Hendrix material covered at Tipitina’s, guitarist Mike Andrews). This scene, hurtfully marketed as acid-jazz by labels in its hot early ’90s moment and later adopted as a more cosmopolitan component of the jam-band scene, is an enduring and under-regarded one. But it has a home and a following in New Orleans, where funk was born as where it’s still as respected as it should be. It descends from the soul-jazz and jazz-funk of the ’60s and ’70s, and it serves a similar purpose for a different demographic. This is improvised music to drink to, social music that works no matter how much or little attention you pay to it. (At the start of the Moore gig, bar patrons watched and cheered the end of an NBA game, and it didn’t seem rude, just part of a vibe.) Coming from the New York scene, with all its self-seriousness and earnest abstraction, I find it refreshing and fun. I feel that way about Jazzfest, too.

Forgive me if I’ve mentioned this before (perhaps repeatedly), but I’ve been playing guitar now for more than 40 years. So when the time comes … END_OF_DOCUMENT_TOKEN_TO_BE_REPLACED

Organ trios and quartets were ubiquitous by the mid-1960s. In African American neighborhood bars and clubs up and down the East Coast, throughout the Rust … END_OF_DOCUMENT_TOKEN_TO_BE_REPLACED

Terence Blanchard looked around the restaurant table and launched into a gentle sermon about jazz education in Detroit that was part homily, part pep talk, … END_OF_DOCUMENT_TOKEN_TO_BE_REPLACED

Creating a program of solo piano music is the ultimate challenge for any improvising pianist. The music on my latest album, Ways of Disappearing (Sunnyside), … END_OF_DOCUMENT_TOKEN_TO_BE_REPLACED