Skip to content
Become a member and get exclusive access to articles, live sessions and more!
Start Your Free Trial
Home > Features > Essential Ellington–An Excerpt from a New Biography 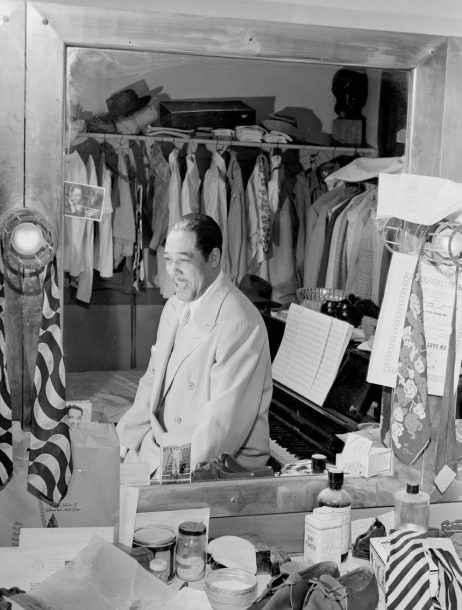 A revelation of a jazz biography, arts critic Terry Teachout’s Duke: A Life of Duke Ellington (Gotham Books) succeeds in humanizing, with brutal honesty but also great respect, an American cultural deity. Teachout, author of 2009’s Pops: A Life of Louis Armstrong, pulls from a deep well of preexisting sources to shed light on the desires and motivations, both personal and artistic, of jazz’s peerless composer and bandleader. This excerpt, taken from the book’s prologue, is a representative sample of Teachout’s no-holds-barred look at the life and work of an unknowable genius.

Though he carried himself like a prince of the realm, he was the son of a butler and the grandson of a slave. Washington, D.C., where Edward Kennedy Ellington was born in 1899, was one of America’s most segregated cities, but it also had a black middle class that was proud and self-aware. Ellington’s parents belonged to it, and their only son, a high school dropout whose regal demeanor belied his poor grades and seeming lack of interest in music, went out of his way to acquire its manners. For all his polish, it was his artistry, not his personality, that was the source of his enduring appeal. But it was the personality that made white people who might not otherwise have done so give him a second glance, and in time it opened doors of opportunity through which few other blacks had been allowed to pass.

Ellington’s surface qualities were exploited to the hilt by Irving Mills, his manager during the 1920s and ’30s. “We wanted Duke to be recognized as someone more important,” Mills told an interviewer in 1984. By this he meant that the best way to position his client in a market full of talented black bandleaders was to present him to the world as a different kind of black man, fine-spoken and expensively tailored, a fellow whom broad-minded white folks could imagine introducing to their friends, even if they might not care to bring him home to meet their wives. Accordingly, Mills’ advertising manual stressed Ellington’s presentability as much as his talent: “He is as genial as he is intelligent, always creates a good impression upon newspaper people with whom he comes in contact and invariably supplies them with good copy for their stories.” Ellington himself was happy to play the game, for he saw his public image as a contribution to the welfare of his people. “Every time you walk out [on] the street and you’re exposed to a white citizen, you know,” he said, “you’re acting in behalf of the race.” That was why he never let his guard down: He knew that there would always be somebody looking.

Over time Mills’ strategy paid off beyond either man’s wildest dreams. Long before Ellington died in 1974, he had become, after Louis Armstrong, jazz’s biggest celebrity, as well as the first jazz musician to be widely hailed as an artist of consequence-and not just by his fellow jazzmen, but also by such distinguished classical musicians as Constant Lambert, Aaron Copland and Percy Grainger. Their praise gave his work a cultural legitimacy at which no posterity-conscious black artist would have been inclined to turn up his nose. Yet he was, like Armstrong, a popular entertainer whose music was meant to please a mass audience. Long before the swing era, his band was seen in films and heard on network radio, and long after most of the other bandleaders who followed him into the limelight faded into obscurity, Ellington continued to perform on network TV and girdle the globe, playing “Sophisticated Lady,” “Mood Indigo,” “Solitude,” “I Let a Song Go Out of My Heart” and the other hits that had made him famous (if never rich). Twelve-thousand people came to his funeral at the Cathedral Church of St. John the Divine in New York City, his adopted hometown and the place that he loved best. By then his baggy eyes and sardonic flattery were almost as familiar to the mourners as his music.

Underneath his soigné exterior, Ellington was a self-centered hedonist who lived a nomadic existence in which everything was subordinated to his art-and, insofar as possible, his pleasure. “What you need to do is wake up after two o’clock, make phone calls, but don’t move an inch,” he told his son, Mercer Ellington. “Just lie flat on your back and phone, and tell everybody everything that has to be done, and lay all your plans without going out anywhere. … When you come downstairs you’ll have prepared your day, and you’ll be the Greatest!” After he died, Mercer found a handwritten note among his father’s papers in which Ellington summed himself up in three lapidary sentences: “No problem. I’m easy to please. I just want to have everybody in the palm of my hand.”

Organ trios and quartets were ubiquitous by the mid-1960s. In African American neighborhood bars and clubs up and down the East Coast, throughout the Rust … END_OF_DOCUMENT_TOKEN_TO_BE_REPLACED

Terence Blanchard looked around the restaurant table and launched into a gentle sermon about jazz education in Detroit that was part homily, part pep talk, … END_OF_DOCUMENT_TOKEN_TO_BE_REPLACED

Creating a program of solo piano music is the ultimate challenge for any improvising pianist. The music on my latest album, Ways of Disappearing (Sunnyside), … END_OF_DOCUMENT_TOKEN_TO_BE_REPLACED

First the good news: As you can see in our annual Festival Guide, there are plenty of jazz festivals scheduled to happen around the world … END_OF_DOCUMENT_TOKEN_TO_BE_REPLACED