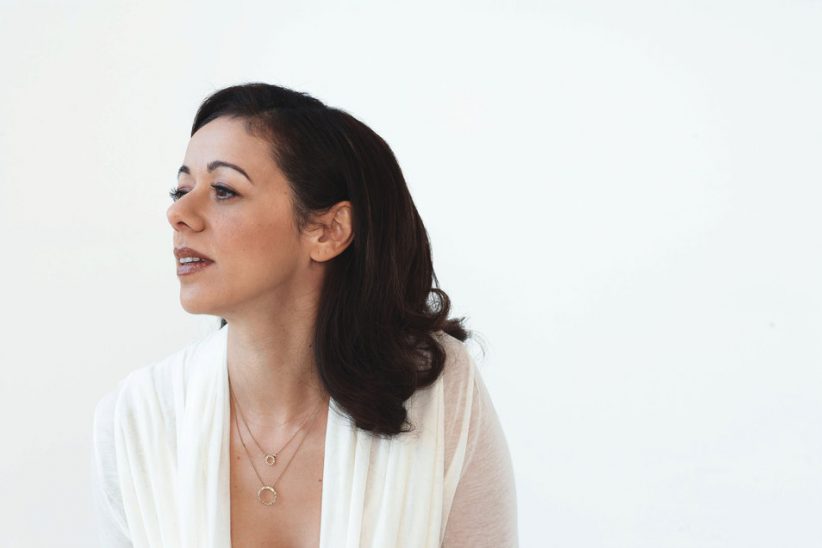 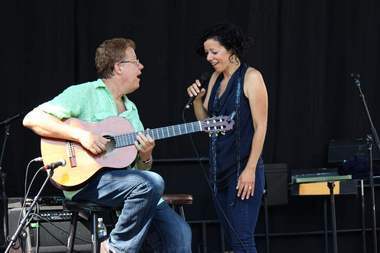 I was asked by the folks who run the Detroit Jazz Festival to get a little more involved with the various features of the festival this year including being part of the streaming television feature JAZZ PLANET.tv, interviewing artists under the JAZZ TALK TENT, and introducing artists as emcee of some of the live shows. I was honored to have been asked and thrilled to contribute. There is one trade off involved in this though, and that is that I spent most of Saturday, day two of the 32nd’ Detroit Jazz Festival, working on these projects kept me from seeing some of the performances on this blazing hot sunny afternoon.

I missed the Brazilian duo of vocalist Luciana Souza and guitarist Romero Lubambo (luckily I’d seen them in Montreal and they are incredibly charming and supremely musical), up and coming young vibes master Warren Wolf and his back WOLFPAC, trumpeter Sean Jones and Detroiters Geri Allen & Robert Hurst with the University of Michigan Jazz Ensemble. I was willing to give up these performances to be part of the other efforts as I most certainly am willing to give back to a festival that has given me so much joy in the past and offers so much more for the present and future. After all, I was all set to introduce the performance by Jason Moran and his band Bandwagon as well as taking in shows by Sun Ra Arkestra, world-jazz pioneers Mandrill and the great Dave Holland and his Octet to top off the evening. That’s until a certain power that is, Mother Nature, stepped in to remind us all that She’s still in charge of things! A massive storm swept through the area with 60 MPG winds, hail, thunder, lightening and incredible rain that washed out the evening’s shows.

Not to be discouraged, Dave Holland decided to take his set to the indoors at the lobby bar of the home base hotel for the festival, the enormous Marriott at Renaissance Center. It was an impromptu event that was only witnessed by those who happened to be walking through the lobby at 10:30 PM. Unfortunately I was not one of them and was not alerted but by all accounts the show was inspired.

As Mike Stratton, the great writer and radio presenter from the area wrote:

“We didn’t want to leave Detroit until we’d played some music for you,” said Holland after the band’s first tune, which started around 10:30 p.m. The Octet is made up of some of the best voices in jazz on their respective instruments: Steve Nelson on vibes (one of several stellar vibraphonists to grace the DJF this year), Nate Smith on drums, Gary Smulyan on baritone sax, Robin Eubanks on trombone, Alex “Sasha” Sipiagin on trumpet, Chris Potter on tenor and soprano sax, Antonio Hart on alto sax and Dave Holland himself on bass. The band opened with Pathway, the title track from their album, and they went on to perform several tracks from that album. Working superbly with form and structure, the unit both grooves and swings, the horns engaging in call and response, the rhythmic tension and release that is nearly carnal in its dynamics. Each player got ample solo space, though Antonio Hart’s snaky recitation built to a thunderous crescendo that gained a huge ovation from a well-lubricated audience. Nate Smith’s start/stop funky solo, playing with time, also got the audience’s approval. And Chris Potter brought down the house with his powerful musicianship.

It’s true that you can’t have it all, and though I missed this show I can report that the artists I spoke with during the day were excited to be in Detroit and were in high spirits. During my stint on the JAZZ PLANET I had the chance to speak with the aforementioned Warren Wolf, whose debut release on Detroit-based label Mack Avenue is getting great revues. He’s one of those bright , young voices in jazz who is smart and talented and full of new ideas. So is young pianist Aaron Diehl, the winner of the American Pianists Association Cole Porter Fellowship competition that I had the honor of emceeing this past Spring in Indianapolis. He stopped by the JAZZ PLANET and also has a debut coming soon on Mack Avenue that is sure to please.

Christian McBride was co-anchor of the “Red Carpet” segment of JAZZ PLANET with festival director Terri Pontremoli and it was great to catch up with him again. He’s of course under the assumption that his Philadelphia Phillies and Eagles will win it all again! Time will tell on that one, but there is not doubt that his new Big Bad release on Mack Avenue will be an instant sensation. He’s performing that music at the festival on Labor Day! I had the thrill of meeting the members of two great bands, New Orleans’ Soul Rebels Brass Band and the great world-jazz pioneers from Brooklyn, Africa as they phrased it, Mandrill. All in all my time on JAZZ PLANET was fantastic.

I spent the 5 PM hour under the Jazz Talk Tent as guest interviewer for a session with Dave Holland and Jason Moran. I’ve spoken to these two gentlemen in the past and the conversation was a breeze, as these two are the perfect example of the best kind of “interview.” They’re both so smart, funny and knowledgeable and with great stories to tell and wisdom to impart. The hour passed far too quickly as we delved into the essence of how they feel about their lives, their history, their craft, their associates and how it all comes together to create a rich life in the arts that we all get to share in when we hear their music. I tried to tee it up and let them go and it seemed to flow naturally and easily. The session ended with questions from the audience and Dave giving us some great selections from the book he should write titled “My Miles Davis Stories.” I’ll buy the first copy.

Not long after my Jazz Talk Tent session ended the storm hit and the outdoor music was all but over. When it passed I had a chance to catch the all acoustic Sun Ra Archestra (no one was going to chance stepping on a wet stage with anything plugged in at this point) as they plowed on with their delightful mix of free jazz with a funky groove. The remaining crowd, some of the hardiest jazz lovers in the world, were thrilled to get the music. All in all the day was a great joy albeit cut short. I’m looking forward to a great Sunday and though I haven’t been able to get through to Mother Nature yet, I hear she’s a jazz fan. She wouldn’t dare to shut us down two days in a row now would she?

Organ trios and quartets were ubiquitous by the mid-1960s. In African American neighborhood bars and clubs up and down the East Coast, throughout the Rust … END_OF_DOCUMENT_TOKEN_TO_BE_REPLACED

Terence Blanchard looked around the restaurant table and launched into a gentle sermon about jazz education in Detroit that was part homily, part pep talk, … END_OF_DOCUMENT_TOKEN_TO_BE_REPLACED

Creating a program of solo piano music is the ultimate challenge for any improvising pianist. The music on my latest album, Ways of Disappearing (Sunnyside), … END_OF_DOCUMENT_TOKEN_TO_BE_REPLACED

First the good news: As you can see in our annual Festival Guide, there are plenty of jazz festivals scheduled to happen around the world … END_OF_DOCUMENT_TOKEN_TO_BE_REPLACED