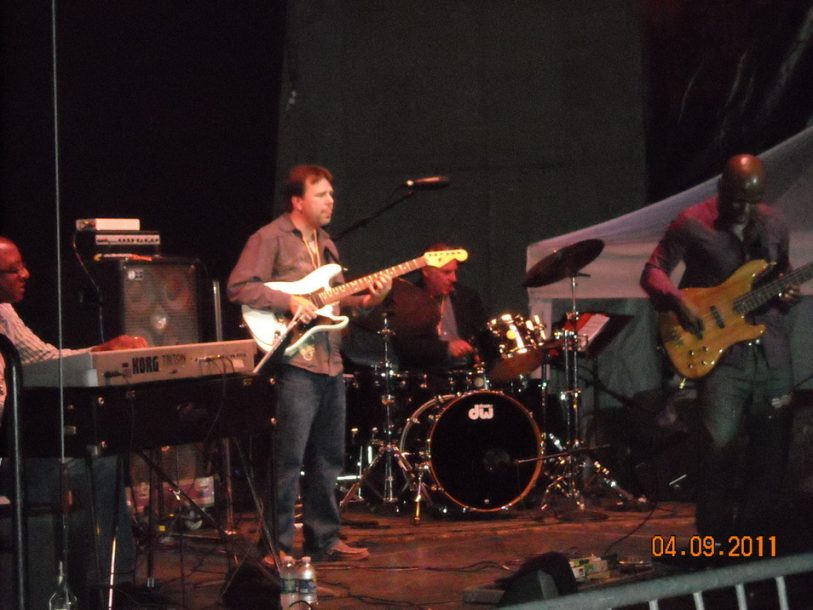 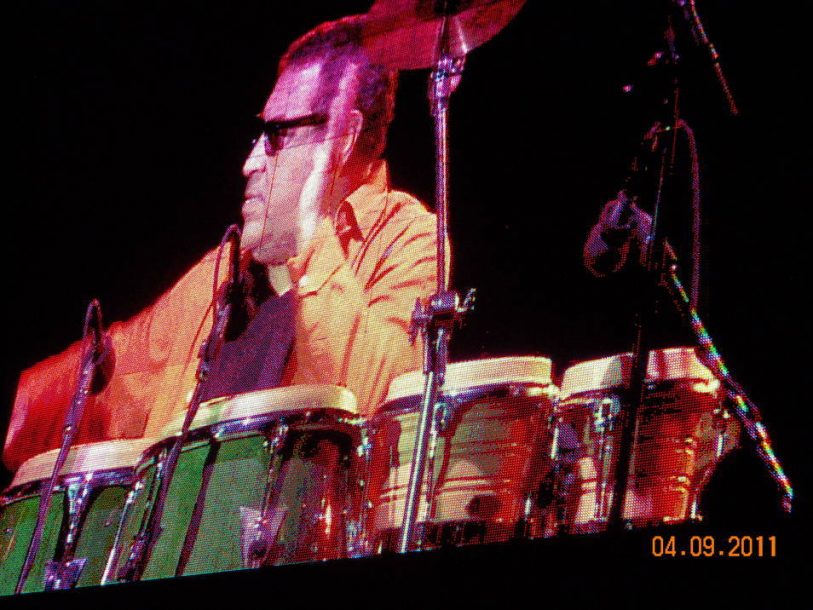 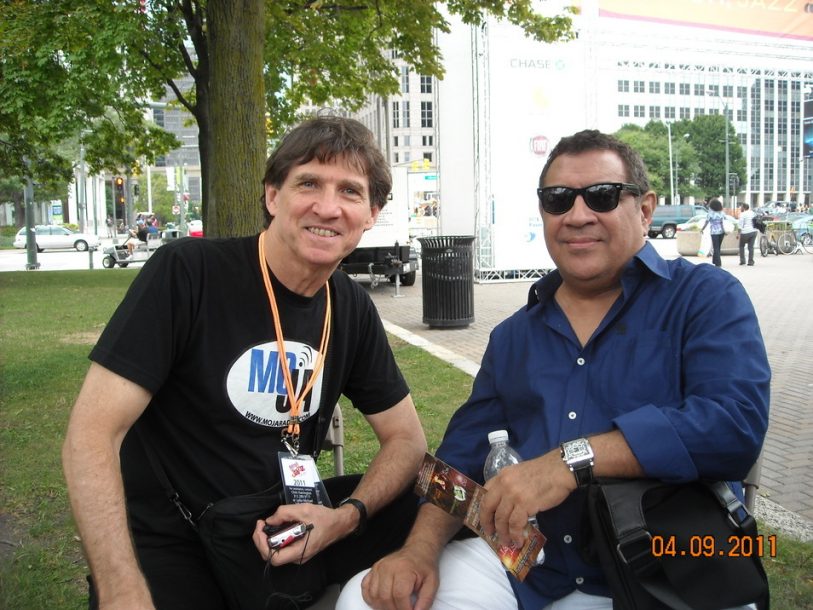 My third day at the 32nd Detroit Jazz Festival began with a fiery conversation and ended with an awesome fireworks display. In the middle I heard as much music as a man can, and as a jazz fan and advocate felt about as satisfied as possible. The theme of the festival this year is “We Bring You The World” and this was most certainly true as in the course of a few hours I was able to hear a European-based pianist, an American who took us to Africa, the blending of New York, Miami & Puerto Rico, the marriage of American jazz with Middle Eastern overtones, and some good, old American funk & fusion. And I didn’t even get to hear 2/3 of the music available to festival-goers on this day!

I began the day with a spirited conversation with the great percussionist Sammy Figueroa who’s played with a list of artists in every genre imaginable, from David Bowie to Miles Davis, Mariah Cary to Sonny Rollins. After years as a sideman he’s now taken on the title of bandleader, and reluctantly at that by his own admission. This talented percussionist with the winning smile and effervescent spirit is a natural leader no matter what he says and he’s gathered a great band from all over the globe to realize his musical vision of putting the Jazz in the forefront of Latin Jazz. He was born in the cultural melting pot that is The Bronx, New York, raised part of his life in Puerto Rico in a section of the country that was equal parts African and Latin, now lives in Miami and has loved jazz from the beginning though he’s open to any and every kind of music. It certainly shows in the music he’s made which has been described as “Latinized Jazz Messengers.” In our conversation I learned how all those elements come together in his life and music and how he cared for Miles Davis in a very personal way after being part of his band that marked his return after hiatus for The Man With A Horn in 1981. Besides laying down the grooves that Miles needed to create this important project that got him back on his feet, Sammy gave Miles some personal support that was most important at a time when Miles was physically and probably spiritually weaker than he’d been in some time. So we can thank him for that as well as his musical efforts. The performance by Sammy & his Latin Explosion at sunset on the largest of the festival’s stages among the downtown Detroit buildings was an explosion indeed marked by virtuoso playing by the entire sextet with Sammy out front, entertaining the crowd with his wit and pounding of the congas. The fact that dozens of fans felt compelled to salsa dance in front of the stage says it all!

Before hearing Sammy Figueroa & The Latin Explosion I had taken a quick trip literally around the Hart Plaza and figuratively around the world musically with as many performances as I could take in. I caught Amina Figarova, the brilliant pianist & composer from Azerbaijan via Rotterdam whose deep and thoughtful compositions are as rich as her playing is superb. With her great band of many years now, featuring a wonderful sax/trumpet/flute front line including her musical and life partner, husband Bart Platteau, the music soared and thrilled as I have always known it to when I’ve seen Amina perform. After the performance I had a chance to catch up with both Bart and Amina for a quick hello. I mentioned that the 10th anniversary of the events of 9/11 were upon us and she recalled again how she had been inspired to create the music of her brilliant 2005 release September Suite after having experienced the events firsthand while staying in a friends apartment in Brooklyn. She grew emotional all over again as she recounted the events of that momentous day and mentioned that she has not been able to perform the suite as it’s an hour and 40 minutes long and most of her performances are more varied in style. But she wanted to tell me that this year, and specifically on the 10th and 11th of September, she will be performing the September Suite in it entirety in Teaneck, New Jersey’s beautiful Puffin Center on Friday the 10th and in New York City at Manhattan’s Metropolitan Room on Saturday the 11th. Anyone lucky enough to be in the area to hear those performances on those days will surely hear a treat and be deeply moved.

I hung around the Waterfront Stage where Amina had performed to catch the complete set by Detroit’s own Regina Carter, arguably the greatest of jazz violinists at this point in history, performing what must be one of her greatest projects, the marriage of African folk songs and jazz known as Reverse Thread. Though I’d seen this show twice before, in New York’s Dizzy’s Club with African kora master Yacouba Sissoko, and again in Montreal with a longtime friend and musical associate playing the harp to fill in the spaces usually occupied by the Kora, I just couldn’t resist. When one comes this close to the source of all things musical you’d be fool to not listen. I may be crazy but not a fool, and I was treated to another magical performance of this inspiring, spiritual, uplifting music. Mr. Sissoko was once again in place and every plucking of the strings of the Kora blending with Regina’s masterful violin work and the spirited accordion playing of Will Holshouser sending the crowd that sat under the trees by the Detroit River into an even more beautiful place.

The rest of my day was spent hopping from place to place to catch segments of as many other performances as I could. Israeli saxophonist/clarinetist Anat Cohen is a delight on stage and she blended American jazz with her own twist of Israeli blues, if you will, to make a tasty brew enjoyed by all. She obviously was having a blast as he glided across the stage, sharing spotlight with a fine band filled with solo artists, among them the great pianist Jason Lindner.

Then it was back the Waterfront Stage to catch one of the rising stars of jazz piano, 2011 winner of the American Pianists Association Cole Porter Fellowship, Aaron Diehl. Only in his twenties, Aaron is already a veteran of many high level performances with the likes of Wynton Marsalis, Hank Jones, Benny Golson and more. His band included fellow Marsalis alumnus Wessel “Warmdaddy” Anderson who takes lots of spotlight when we blows saxophone but was there only to complement Mr. Diehl’s efforts. Aaron is a charismatic and talented performer with great stage presence that belies his few years on the earth and the scene but there’s wisdom in his words and his playing. This is a hard swinging young man who also has control of dynamics as well. He’s confidently in control in general and showed that as across the plaza was a very high volume big band blazing away in the distance. Never missing a beat, Aaron played on with a delicate, expressive solo piano piece. Remember the name…Aaron Diehl.

A name you may already know is Vijay Iyer, as he’s one of the most acclaimed pianists and composers in jazz today. He’s won more awards than he can store in a small museum at this point, including Musician of the Year 2010 by the Jazz Journalists Association. If you’re looking for the unique in jazz then Vijay is your man. No one really sounds like him and what you get when he plays is his real spirit, not anything completely derived from any other source. It’s easy to say that he’s blending the music of his Indian heritage with American Jazz but that’s too simple a statement. It’s Vijay Iyer music you get from him and to me that’s the mark of a true artist. I didn’t get to hear enough of his show as I was off to my last stop of the day to get a shot of electric jazz to top off the night.

I had been asked by the festival to introduce Richie Goods and his band Nuclear Fusion on the stage of the concrete amphitheatre that is my favorite venue at the festival, the Pyramid Stage. It’s a bit hidden from view and you get a feeling that you’re in a special place where special things happen. Richie is an aggressive, young bassist with great credentials, from Pittsburgh to Berklee to New York City. He’s studied with Ron Carter and Ray Brown and loves all forms of jazz but as he told me, “Nobody’s playing this music too much!” The music he was talking about is electric funk and fusion for the 21st century. He wasn’t going to get any argument from me as I love this stuff as much as, if not more than, any form of jazz that has ever existed. To help him get to where he wanted to be musically on this night he made a great choice in drummers, the legendary Mike Clark of Headhunters fame as well as his own many projects as a sideman and leader. Xavier Davis manned an electric piano-synth combo and Tom Guarna cranked out some chunky, funky, fiery guitar lines to complement Mr. Goods’ thunderous bass. At times I felt like I was hearing what Jimi Hendrix might be doing were he alive today. Other times I felt I was hearing what Return To Forever in their classic quartet configuration might sound like if Stanley Clarke were the leader. The crowd, and I, loved it and it took us to the 11 PM hour, the end of the day’s musical activities and the brilliant fireworks display that had been rained out the night before. Fireworks indeed to top off a great day!

Terence Blanchard looked around the restaurant table and launched into a gentle sermon about jazz education in Detroit that was part homily, part pep talk, … END_OF_DOCUMENT_TOKEN_TO_BE_REPLACED

Creating a program of solo piano music is the ultimate challenge for any improvising pianist. The music on my latest album, Ways of Disappearing (Sunnyside), … END_OF_DOCUMENT_TOKEN_TO_BE_REPLACED

First the good news: As you can see in our annual Festival Guide, there are plenty of jazz festivals scheduled to happen around the world … END_OF_DOCUMENT_TOKEN_TO_BE_REPLACED

Steve Lacy was once a brilliant bebop player. Yet conventional wisdom says the opposite. Many have long argued that a key to the innovative soprano … END_OF_DOCUMENT_TOKEN_TO_BE_REPLACED