Skip to content
Become a member and get exclusive access to articles, live sessions and more!
Start Your Free Trial
Home > Features > Detroit Jazz Festival Day One: A Red Hot Blast of Peace 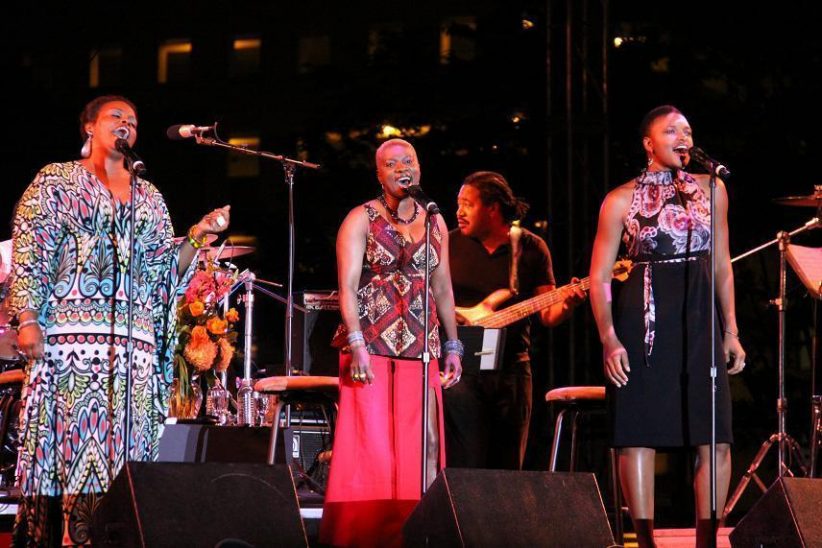 When I got my first sense of Friday’s weather in Detroit I felt like I had just landed in Jamaica instead of Michigan. The day may have been hot, hazy and humid, the temperatures were closer to 100 than 90, but I just forgot all that as my focus was on hitting the ground running to get the most out of my fourth straight visit to “The World’s Biggest Free Jazz Festival.” After visiting a bit with a number of my old friends from the jazz media and record company community at the annual opening night gathering hosted by the festival’s executive director, Terri Pontremoli, I was off to hear the two, major opening night performances.

This year’s artist in residence is the master drummer Jeff “Tain” Watts who was chosen as this year’s featured artist to complement the theme of the 2011 festival “We Bring You The World.” The theme investigates the integration of the music of various parts of the world with jazz and vice versa, and there are dozens of artists from all over the world performing. It also makes the statement that music began with the drum, so “Citizen Tain” is the man in the middle of it all for the weekend and his performance with what he called his “Drum Club” was the appropriate way to kick things off!

With the sun still blazing, the humidity high and the temperatures still in the 90’s the crowd was a bit sluggish in responding to the non-stop groove theat Jeff and this all-star crew created. Eventually they were compelled to respond and respond they did. With Joe Locke on vibes, bouncing around in an all white outfit with four mallets flying, he was threatening to steal the show from the beginning as he referenced “Papa Was A Rolling Stone” during the first jam of the set, a piece “Tain” introduced as “Motor,” for the Motor City of course. There was an army of percussionists including Susie Ibarra on various, indefinable things to beat on, legendary percussionist Horacio “El Negro” Hernandez, and Pedro Martinez. Detroit natives Robert Hurst and Raphael “Ricky” Statin completed the band on bass and saxophone respectively. But to top things off, and it was obviously a great honor and the peak of the night for Mr. Watts, the band was joined in mid-set by the great Nigerian drummer Tony Allen. Mr. Allen’s regal presence behind the drum kit brought that special rhythm to the stage that tied everything together musically, rhythmically and spiritually. He was introduced as “The Father of Afrobeat,” and the fact that his beat, combined with Fela Kuti’s voice, sax, words and spirit, did in fact create an exciting music that left an indelible impression that reverberates decades later and even today is certainly true. You can hear it today in the music of bands like Antibalas, Chicago Afrobeat Orchestra, Budos Band, and Mandrill, one of the bands that will grace the same stage later in the festival. After an hour plus of this great groove that came from a decidedly African source the stage was set for the final performance of day one of the 32 Detroit Jazz Fest.

Between sets, the spirit of Detroit greats of the past was conjured with the playing of the soundtrack of Trouble Man, from the 1972 film of the same name, that featured arrangements by J.J. Johnson and some fine saxophone leads by the unsung hero Trevor Lawrence. Sprit was the operative word here as that friendly Detroit hospitality filled the air on the hot, steamy night. The weather seemed to be the common bond and a main topic of conversation and a unifying factor for the night. That, and love of the music of course. I have had a number of people ask me if coming to Detroit was a scary thing as they thought of it as a dangerous place. All I can say is that each time I’ve attended the festival I’ve felt like I was at one, big family reunion with strangers acting like long, lost cousins, chatting about the day, the weather, the music, and Detroit in general.

Once the set began with three of the most dynamic women vocalists you are ever likely to see on one stage, in front of a blazing band, all other topics were rejected and the music was the one and only focus for the next hour and a half. There were 8 musicians on the stage and 5 of them were strong women. I have been thinking recently of how the troubling direction that the world has taken lately could be altered if the “Mother Spirit” of the universe would just take over and dominate things. Well, on this night, in this place, that is exactly what occurred as Dianne Reeves, Angelique Kidjo and Lizz Wright sang from their souls, and shared their messages of positivity that delivered a sense of peace to the proceedings that lingers with me still. With them were two more masters of jazz who happen to be world-famous women and accomplished musicians. Detroit’s own Geri Allen alternated between acoustic and electric piano, while Terri Lyne Carrington drove the band from behind the drum kit. They were joined by Brazilian guitarist Romero Lubambo, who exhibited tremendous versatility on both electric and acoustic guitars playing everything from pure jazz to funk, African, Latin and everything between and beyond. Bassist James Genus, known primarily for double bass, plugged in for this evening’s work and he needed to be electric as the big sound coming from the stage would have probably overwhelmed him otherwise. Completing the band was renowned percussionist Munyungo Jackson.

Each of these ladies could easily be the featured artist alone but to have all three as a single unit was simply astounding. Though they are so very different their message was so much the same…that women of the world are to be respected, revered and listened to! Dianne Reeves has a powerful, majestic voice that explodes like a cannon and shakes the walls of your soul. Angelique Kidjo brings her African heritage to the stage, she’s originally from Benin, and sings in her native language as well as English with and energy and emotion that is matched only by her great dancing ability. At one point she danced among the crowd and had everyone joining in singing and moving with her. Young Lizz Wright has a sultry elegance to her deep and expressive voice that owes much to gospel and soul artists who came before her.

The night was billed as Sing The Truth! The message was a plea for understanding and positivity in a crazy world. Message received on this night by this audience! The show as also a salute to the great women who have come before including Abbey Lincoln, Miriam Makeba, Odetta, Aretha Franklin, Mahalia Jackson and other contemporaries like Joni Mitchell and Tracey Chapman. When the night was done and the message received the audience, not to mention the performers, were absolutely spent on this hot night in Detroit. But the exhaustion was from having involved themselves in an artistic exercise in peace. There was not a single negative vibe in the air. Every face wore a smile. People had nothing but kind words to say to one another. The ladies came to Sing The Truth, and the message was peace. Mission accomplished! They’ve performed this same show around the world. Would that they could take it to every single corner of the planet!

Organ trios and quartets were ubiquitous by the mid-1960s. In African American neighborhood bars and clubs up and down the East Coast, throughout the Rust … END_OF_DOCUMENT_TOKEN_TO_BE_REPLACED

Terence Blanchard looked around the restaurant table and launched into a gentle sermon about jazz education in Detroit that was part homily, part pep talk, … END_OF_DOCUMENT_TOKEN_TO_BE_REPLACED

Creating a program of solo piano music is the ultimate challenge for any improvising pianist. The music on my latest album, Ways of Disappearing (Sunnyside), … END_OF_DOCUMENT_TOKEN_TO_BE_REPLACED

First the good news: As you can see in our annual Festival Guide, there are plenty of jazz festivals scheduled to happen around the world … END_OF_DOCUMENT_TOKEN_TO_BE_REPLACED