Skip to content
Become a member and get exclusive access to articles, live sessions and more!
Start Your Free Trial
Home > Features > Detroit Jazz Festival 2012 Day Two: Speaking Of and To Jazz Titans! 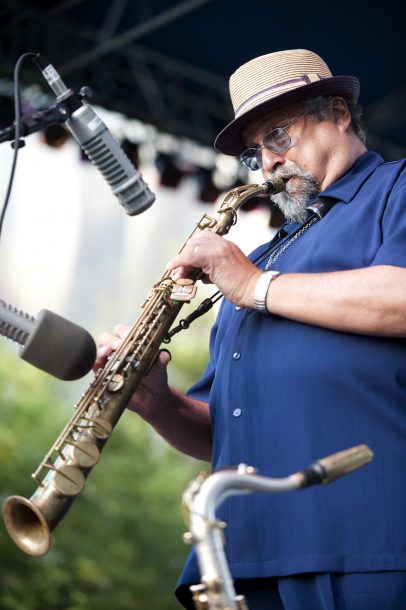 Saturday, September 1st, Day Two of the 2012 Detroit Jazz Festival was my busiest workday of this year’s event for me. I had been asked to moderate a panel with three of the current jazz greats who’ve won multiple Grammy awards by the National Academy of Recording Arts & Sciences, AKA NARAS or The Grammy People as they are popularly known. The three jazz titans chosen were Terence Blanchard, this year’s Detroit Jazz Fest Artist-In-Residence, Joe Lovano and Gary Burton. I’d also been asked to take the stage to introduce Chick Corea and Gary Burton with The Harlem String Quartet in the last performance of the night. There were some other events to attend before the work, if one can really call having this much fun “work.”

There simply isn’t a more wonderful place to be on a sunny summer day than sitting right on the Detroit River under the shade of a tree in front of the Mack Avenue Waterfront Stage with a great band of performers giving their all for an appreciative audience. That’s where I placed myself to take in the performance by young Swiss harmonica master Gregoire Maret. I had met Gregoire in Montreal this summer but missed his performance so I wanted to make seeing him here a priority. His performance shifted between peaceful grooving tunes with a Brazilian flavor to high energy pieces that featured Gregoire jumping and strutting all over the stage to squeeze every bit of air and energy from his body to get his musical point across. After the well-received performance I caught up with him for a quick word and found out he is married to a Brazilian lady and has a special affinity for all things Brazilian, doesn’t especially work out to have the energy to perform as he does, it just comes naturally, and that playing under the sun or under a low roof in a club are all the same to him. What a great, young star he is!

A jazz musician’s legacy can be a multifarious slope. Sometimes it’s defined by contrasting stylistic paths that amalgamate into a career, as with Miles Davis. … END_OF_DOCUMENT_TOKEN_TO_BE_REPLACED

I reached across the northern border to Toronto, Ontario, Canada, for my latest subject of the “In Service of Jazz” series of interviews: Sybil Walker, … END_OF_DOCUMENT_TOKEN_TO_BE_REPLACED

When jazz guitarists step out on their own, leaving the security of accompanists behind, they face special challenges. Yes, they can handle chords and melody … END_OF_DOCUMENT_TOKEN_TO_BE_REPLACED

Those only familiar with Diego Barber’s Sunnyside Records output might be taken aback by his latest release on the label, Drago. Its largely electronic sounds … END_OF_DOCUMENT_TOKEN_TO_BE_REPLACED