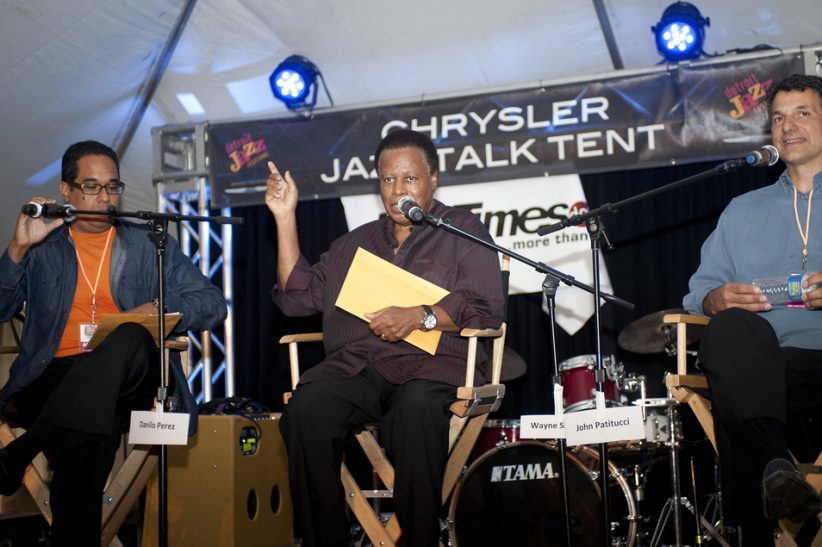 Sunday, September 2nd, Day Three of the 2012 Detroit Jazz Festival started with clouds and a threat of rain that luckily never materialized. An all-outdoor festival always presents the possibility of interruption from Mother Nature, as last year’s violent storms did to take away almost a full day of shows, but this day was a marvelously comfortable one with some of the greatest players that jazz knows today playing for huge crowds. I began my day at the Carhartt Amphitheatre Stage to enjoy guitarist Kevin Eubanks playing the blues and other pleasing styles for an appreciative Detroit audience that has become quite familiar with Mr. Eubanks. Kevin is always smiling it seems but he looks to be happier than ever with the current state of his life after his long stint as leader of “The Tonight Show” band and there is definitely less of a daily grind one would imagine. I caught up with him backstage after the show for a quick conversation and found that he’s taking the time to make sure to work out, the dude is “cut” shall we say, and he maintains a healthy lifestyle as a vegetarian too. This was his second show of the festival after having been part of the Mack Avenue Records All-Star Band. His second album for Detroit’s Mack Avenue label will be coming out in 2013 and it features his brothers Duane and Robin. There’s lots to look forward to in the life and career of Kevin Eubanks.

I found Donald Harrison again for the interview I’d been looking for since we first talked in the shuttle coming from the airport on the first day here. He was again doing double duty on this day as he’d just been part of another Jazz Talk Tent. He’d participated in the DownBeat Blindfold Test by listening to segments of songs and attempting to tell who the artists were. He told me he enjoyed it thoroughly and proved again that he’s a better man than I. He had made his way to backstage at the Carhartt Amphitheatre to prepare for another performance, this time as guest of young Latin jazz star Auturo O’Farrill and his Septet. My conversation with Donald returned to the storms that have hit his beloved New Orleans from Katrina to Issac and how if one loves the city too much to leave you weather those storms or anything else to be there. Donald is one of those who loves his city, all it represents from its glorious past and stands for today. We talked of how Detroit is very much a “Sister City” to New Orleans in many ways, culturally and otherwise, and how the legacy of education and mentoring and the variety of music created in these two musical melting pots has fostered music of vast variety. Donald is certainly the product of this situation as he’s one of the most versatile players in jazz today able to swing, groove, play freely, and in most any setting as he’s proven so well during his many appearances at this years Detroit Jazz Fest. For Donald it’s again double duty on Monday, Labor Day, as he’ll start the day with a performance featuring his own quintet followed by a salute to New Orleans titled A Night in Treme featuring Donald with The Preservation Hall Jazz Band and his nephew Christian Scott on trumpet.

A mass of people were filling the streets and walkways at this time and the main reason was that they were making their way to the Chase Main Stage in the area of downtown across Jefferson Street from The Hart Plaza called Campus Martius to hear Pat Metheny’s Unity Band perform. By chance I had run into Pat as we were both walking out of the hotel on the way to the festival grounds and we caught up for a quick conversation. He mentioned how this band had become incredibly tight with over 50 shows under their belts at this point and that the audiences have been receiving it so well. I can attest to that fact after having seen their performance at the Newport Festival and again here in Detroit. Pat gave great credit to Chris Potter’s presence in the band calling the group a rhythm section for the saxophonist. Those are pretty humble words coming from one of the most famous and popular guitarists, composers and bandleaders modern jazz has known. I have thoroughly reviewed the show from Newport in a previous blog but suffice it to say about the Detroit performance that once the final strains of the Metheny classic Are You Going With Me had ended the crowd was stunned then erupted in thunderous approval of the performance. As I walked away among the audience members I saw many heads shaking and lots of people simply saying “WOW!” Pat Metheny “brings it” with every performance and his first ever show at the Detroit Jazz Festival was a smashing success.

During this same afternoon a truly astounding event presented by JazzTimes was occurring under the Chrysler Jazz Talk Tent as Wayne Shorter, with his latest quartet of Danilo Perez, John Patitucci and Brian Blade, were taking questions from another former Wayne Shorter alumnus, pianist Renee Rosnes, for an hour of truly revealing conversation one would never imagine being able to sit in on. During the hour Danilo, John and Brian were able to contribute thoughts about what it has been like for them to work with Wayne for so long, but for the most part the spotlight was on Mr. Shorter, one of the living legends of jazz who at 79 is as lucid and creative as he has ever seemed to be. The topics turned from his remembrances of being around everyone from Miles Davis to Lester Young and Bud Powell to how playing hooky from school made the principal switch him from art class to music class where he was eventually struck with love of music and the desire to buy a clarinet which obviously turned into a saxophone somewhere down the line. His first teacher in Newark, NJ, where he grew up, showed him that there was no difference between the music of Mozart or Charlie Parker. He learned other basic lessons of life and music there but as time has gone on in his life he’s developed a very clear view of not only how to live a productive life but to create music that is truly the issue of his soul. Though he’s written some of the most famous compositions in jazz history the music of Wayne Shorter with this quartet is more free and expressive in a way that cannot be copied or captured in a concise, strict arrangement. The band would prove that later in the night to close out the day’s activities for a massive audience at the Carhartt Amphitheatre Stage. Wayne Shorter is so very Zen and after hearing his comments I can truly “hear” his music like never before. I caught up with Renee Rosnes after the event to get her thoughts and catch up with her about her present and future endeavors. She’s as busy as one can imagine with three kids and a fully packed musical schedule that includes duo performances with her pianist husband Bill Charlap, but her time with Wayne Shorter certainly left a deep impression. I can certainly see why that is true after an hour with Wayne and company under the Jazz Talk Tent here in Detroit.

My last stop of the night was again in front of the Chase Main Stage to hear two guys with distinctive hats and horns, Joe Lovano & Dave Douglas, and their new quintet Sound Prints which was a band inspired by the spirit of Wayne Shorter’s music. The performance was a thrilling one for anyone who wants to hear two of the finest players of their instruments in jazz today matching lines and blending their horns sometimes in simultaneous improvisation and other times matching their lines not in unison but simply as one. Dave Douglas, complete with his signature classic NYC cab driver’s hat, is both expressive and forceful and has a great talent for playing sweetly without a mute. Joe Lovano, wearing his familiar fedora, is simply the great tenor player of his generation with a big sound that is so very much his own. With their quintet featuring veteran drummer Joey Baron and young stars Linda Oh on bass and Lawrence Fields on piano Dave and Joe played a program of their originals that, as I stated, was inspired by the spirit of Wayne Shorter music but not a set of Shorter compositions. The set list was one of compositions by the co-leaders but the sense of freedom in the music was certainly one that I sensed could be attributed to the Wayne Shorter fountain of inspiration. After the show I had a chance to catch both Joe and Dave and have them reveal the history of this band. These are two guys who certainly love playing together as well as simply spending time together. As for the future there seems to be the possibility of more performing and possibly a recording. There’s certainly lots of great material to choose from. Dave has a new recording of hymns that he’d promised he’d record for his Mother who passed away recently and it’s another in a long line of recent, mostly acoustic, projects he’s produced. He mentioned that there is more electric work with Keystone in the offing as well and with Dave Douglas and Joe Lovano there is always more to look forward to.

Organ trios and quartets were ubiquitous by the mid-1960s. In African American neighborhood bars and clubs up and down the East Coast, throughout the Rust … END_OF_DOCUMENT_TOKEN_TO_BE_REPLACED

Terence Blanchard looked around the restaurant table and launched into a gentle sermon about jazz education in Detroit that was part homily, part pep talk, … END_OF_DOCUMENT_TOKEN_TO_BE_REPLACED

Creating a program of solo piano music is the ultimate challenge for any improvising pianist. The music on my latest album, Ways of Disappearing (Sunnyside), … END_OF_DOCUMENT_TOKEN_TO_BE_REPLACED

First the good news: As you can see in our annual Festival Guide, there are plenty of jazz festivals scheduled to happen around the world … END_OF_DOCUMENT_TOKEN_TO_BE_REPLACED