Skip to content
Become a member and get exclusive access to articles, live sessions and more!
Start Your Free Trial
Home > Features > Dennis, Anyone? 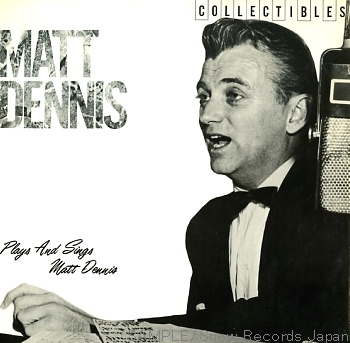 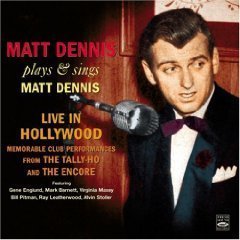 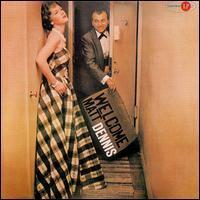 If Matt Dennis’ sole achievement was as co-writer of “Angel Eyes” or “The Night We Called It a Day,” he’d have earned his place in music history. But Dennis composed more than a dozen of the finest standards of the mid-20th century, including “Will You Still Be Mine?,” “Violets for Your Furs,” “Everything Happens to Me” and “Let’s Get Away from It All.” (Notice a pattern? All were recorded, and most made famous, by Sinatra – and for good reason, which I’ll get to in a minute). And Dennis was more than just a masterful composer. He was also a skilled pianist and an appealing singer, with a voice that suggested a cocktail-hour combination of Mel Tormé and Fred Astaire. He was at home, almost literally, in the small clubs that dotted L.A.’s La Cinenega Boulevard during the 1950s, exhibiting the ingratiating sort of bonhomie that makes you want to plant yourself down on a red leather banquette and indulge in too many Manhattans.

Other than in reference to his songs, few people speak about Matt Dennis anymore, which is a shame. He’s worth remembering and, on the few recordings that exist, savoring.

Dennis was born in 1914 in Seattle to musician parents. He spent one season with Horace Heidt’s orchestra, then settled in L.A. and, thanks to quickly established friendships with the likes of Margaret Whiting and Jo Stafford, found work as an arranger and vocal coach. It was Stafford who introduced him to her boss, Tommy Dorsey, who hired Dennis as his resident arranger and composer. Within the first year of their association, Dennis wrote fourteen songs for Dorsey, including “Everything Happens to Me” and “Will You Still Be Mine?,” both recorded by a newcomer to the Dorsey organization named Frank Sinatra. The lyrics for most of Dennis’ early hits were fashioned by Tom Adair, a full-time employee of the local electric company who moonlighted as a poet. Their first collaboration was the peppy “Will You Still Be Mine,” a list song à la Cole Porter (and one that Dennis the performer would have endless fun with, often working celebrities of the day into the list, including one 1953 reference to “Miss Monroe” growing “old and flat, er, fat.”), but their teamwork reached its apex with the haunting, heartbreaking “The Night We Called It A Day.”

After parting ways with Dorsey, Dennis continued to write with various partners, and established himself as a fixture on the local circuit. He was also a regular on TV variety shows, and headlined his own summer replacement series in the early ’50s. On the debut episode, Sinatra showed up for a guest appearance, introducing himself as “President, Hoboken Local, Matt Dennis Fan Club.”

Sadly, Dennis’ entire recorded output totals just six albums. All have, over the years, been reissued on CD overseas, but remain tough to find (and pretty pricey). She Dances Overhead, from 1955, is a lilting homage to Rodgers and Hart. (It is also the only Dennis album I could find on iTunes). That same year he released Dennis, Anyone? (recorded live at Hollywood’s Encore club), a mixed assortment of originals that extends from the misty “Where Do We Go from Here?” to the breezy “Relax” and fiery “Devil Talk.” The following year he released Play Melancholy Baby, a lovely collection of standards, plus a couple of lesser-known originals, notably the distinctly Sinatra-esque “For the Losers” (though that’s one Sinatra never recorded). 1959’s Welcome Matt Dennis!, a set comprised entirely of homey ballads, is of particular interest because it was arranged and conducted by Sy Oliver.

Popular opinion suggests that Dennis’ finest album is Matt Dennis Plays and Sings Matt Dennis, captured at the Tally-Ho club in 1953. As the title suggests, it features Dennis working his way through a dozen of his best-known compositions, with a couple of visits from his vocalist wife, Virginia Maxey (a sort of Betty Hutton type, with plenty of sass and just as much sizzle). It is, indeed, a great record, one that captures Dennis at the height of his popularity and fully demonstrates how appealing a headliner he was. (Amazon lists it for $40, and it’s worth every penny. If you can find it, there’s also a twofer, released in 2005 on the Fresh Sounds label, that combines Plays and Sings and Dennis, Anyone?).

But the rarest of all Matt Dennis albums is actually the best. Released on the Bayside label in 1980 and recorded at Herb Alpert’s A&M Studios in L.A., it is called simply Angel Eyes: Matt Dennis Is Back but might more rightly been named Matt Dennis Plays and Sings Matt Dennis Revisited. (I’ll confess that I never would have know of Angel Eyes‘ existence if it weren’t for Michael Feinstein, who not only alerted me to its existence but actually found me a copy). Much of the playlist duplicates the 1953 release, and Virginia is again around for a couple of duets (and one solo turn). It features Nick Fatool on drums and Ray Leatherwood, who also played on Dennis, Anyone? and Play Melancholy Baby, on bass. What is remarkable about Angel Eyes is that the then 66-year-old Dennis sounds even better than the not-yet-40 Matt at the Tally-Ho. The voice hasn’t aged an iota, but the acquired wisdom of those three in-between decades is soaked into the fabric of each classic tune.

If you’d like to share your thoughts on Matt Dennis, or have ideas or suggestions for future installments of “Hearing Voices,” I invite you to email me at [email protected]

Organ trios and quartets were ubiquitous by the mid-1960s. In African American neighborhood bars and clubs up and down the East Coast, throughout the Rust … END_OF_DOCUMENT_TOKEN_TO_BE_REPLACED

Terence Blanchard looked around the restaurant table and launched into a gentle sermon about jazz education in Detroit that was part homily, part pep talk, … END_OF_DOCUMENT_TOKEN_TO_BE_REPLACED

Creating a program of solo piano music is the ultimate challenge for any improvising pianist. The music on my latest album, Ways of Disappearing (Sunnyside), … END_OF_DOCUMENT_TOKEN_TO_BE_REPLACED

First the good news: As you can see in our annual Festival Guide, there are plenty of jazz festivals scheduled to happen around the world … END_OF_DOCUMENT_TOKEN_TO_BE_REPLACED