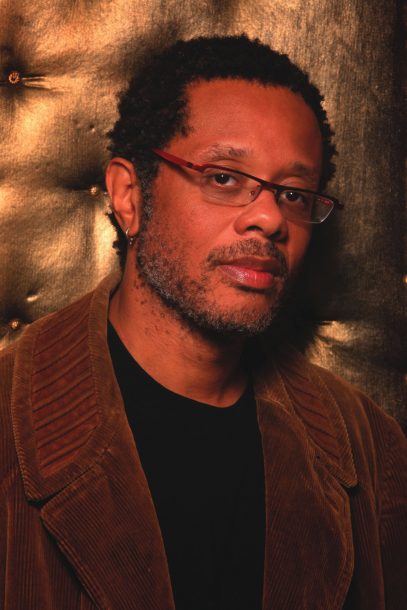 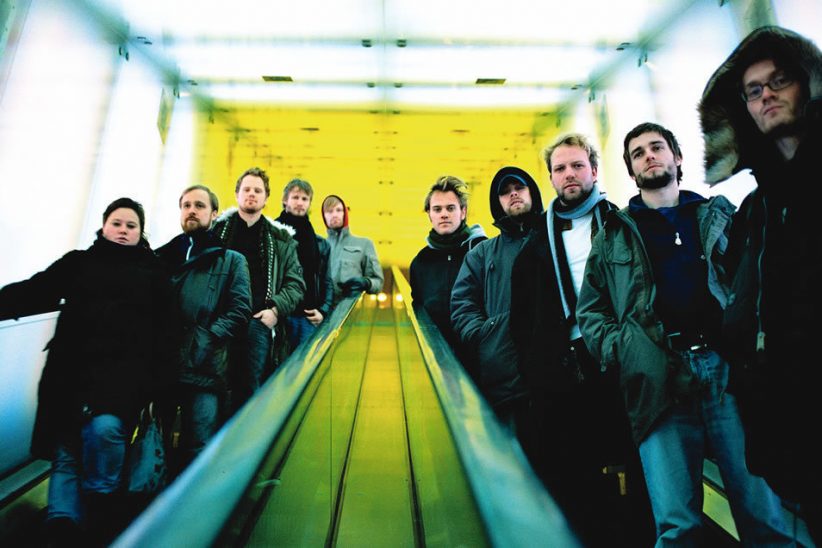 I tried to pack as much as I possibly could into my last full day spent as the 32nd Festival International de Jazz de Montreal. After my last trek up the mountain for a final gaze over the beautiful city below I hit the press room for some meaningful conversation with Brian Haas, Josh Raymer, Chris Combs and Jeff Hashbarger, the quartet of youngsters that are Jacob Fred Jazz Odyssey. It was especially great to get some time with these guys to get the skinny on their next release coming later this summer, the ambitious project The Race Riot Suite, inspired by the 1921 events in Tulsa, Oklahoma during which the affluent African-American community of Greenwood was burned to the ground by an angry mob. Much has been written and much as been covered up about this sad but somehow inspiring part of American and Oklahoma history and I’ll let you read up on it yourself. I bring it up because I had a chance to see the band play portions of the Suite live later in the day and I’ll share that with you in this blog. I also had a marvelous, and long-anticipated conversation with the two gentlemen from Norway, Lars & Martin Horntveth, who are the driving force behind Jaga Jazzist. More on that later too but it was time for some live music. First stop, The Gesu Theatre to get the gospel according to the versatile Mr. Don Byron.

Next to the word “eclectic” in the dictionary is surely a picture of Don Byron. I mean the guy’s done everything, and I do mean EVERYTHING, from klezmer to straight-ahead, to Stephen Sondheim, to Junior Walker, to Igor Stravinsky, to soundtracks, to his own great compositions and more facets I’m leaving out. Don is obviously a restless soul and seems to not only embrace change but requires it. I was thrilled to see that he was performing with what he calls his “New Gospel Quintet,” and when he took the stage it was instead a quartet of Don with acoustic piano, bass & drums. They went right into a fine, soulful version of “Giant Steps,” which to my way of thinking is a very spiritual way to begin a “gospel” show. Then the band was joined by a wonderful female vocalist wearing a flowing flowery dress, shades and a turban. She joined the quintet and delivered the final gospel ingredient, the voice, to complete the gumbo.

I noticed during the performance that Don had changed a couple more things, in that his signature dreadlocks are gone and he relied much more on the tenor sax than I’d thought he would since he made his name primarily as a clarinetist. No worries though as he’s great on both and I believe in giving an artist as much space as he/she might need for free expression. The band played a jazz-gospel mix inspired by gospel pioneer Thomas A. Dorsey and the mix certainly leaned more to the jazz side of things as you might expect.

One thing I did not expect, but having never seen Don play before I will give him some slack here as an eccentric person and performer, was his manner on stage. He seemed sometimes disengaged and almost uninterested standing oftentimes with his back to the audience and even took a peak at his watch in mid-performance. He had no expression on his face most of the time, only grunted approvingly occasionally at inspiring moments of playing by his band mates, and even seemed a little uneasy or bothered as he stopped the flow of the set, making a change with the exclamation “We ain’t doing that one!” The band seemed slightly taken aback but plowed on and so did I. Like I said, the guy could just be eccentric and deserves his space. I would have loved to have found out by talking to him but the only time I was given for an interview was five minutes after the show and just before he was to meet his fans and sign CD’s. That’s OK, as I’d prefer to not be a bother, so I’ll catch him later I hope. I’m sure glad I caught him for this show though, as he certainly captured the essence of gospel in the performance which overall was a fine one.

Then it was once again off to the friendly confines of the Club L’Astral for Jacob Fred Jazz Odyssey who kicked off the set with music from their forthcoming album I mentioned earlier, The Race Riot Suite. One might think that with the subject of this piece the music would be totally dark. That is not the truth as the composer of the piece, lap steel player Chris Combs, explained in our interview earlier in the day. The story is as inspiring as it is disturbing. The Greenwood community was indeed devastated but came back renewed and, overcoming the hatred and violence, became even stronger than before. The event forced the city, state and nation to address this darkness and strive to make things better. The music is filled with darkness, light, deep thought and inspiration all delivered with the inspiring playing of this airtight quartet of unique improvisers. It’s Mr. Combs lap steel playing that makes the music “Red Dirt Jazz,” the combination of that folksy tradition of Oklahoma singer-songwriters and improvised traditional America music.

These guys give it their own personal 21st century stamp and they give it their all with every performance. Though there is a distinctive horn section on The Race Riot Suite including Steven Bernstein, Peter Apfelbaum and Jeff Coffin, there was nothing missing in the performance of the work by the core quartet that is JFJO. They closed out the night with “Dretoven,” one of their signature songs from their recent repertoire, and I left with a smile on my face as I have following every JFJO show I’ve ever seen. Now it was off to hear my final live show of the festival, Norway’s powerhouse band Jaga Jazzist.

Jaga Jazzist is not a band…they are a force, and a musical force to be reckoned with for years to come if I, and their legion of hardy fans, have anything to say about it. The Club Soda was filled to overflowing to hear Jaga, as they are simply known, for the first time in Montreal since 2004. I had gotten a lot of the history of the band earlier in the day from Lars and Martin Horntveth, the two gentlemen who’ve been there since the very beginning in the mid-1990’s when Lars was only 14 years old. They are deep, intelligent young men with great humility but one should not get the idea that there is anything timid about what they deliver once they hit the stage.

They don’t so much perform as unleash a constant series of musical explosions. Though there is much drawn from rock and electronica in their music there is also classical and jazz with elements of the musical heritage of Norway included. Every member of the 9-man aggregation seems to play multiple instruments or devices and the music coming from the stage is a massive wall of sound and energy! Lars told me something very revealing that lingers as I think back on what I witnessed on this night. He was explaining the inspiration for Jaga’s music and said that much of it comes from the Norwegian big-bands from earlier days, not playing standards in the American big-band tradition, but playing their own compositions. That spoke volumes, as I took in the high volume of the music of this 21st century, very electric big band which features multiple horns (trumpet, saxophones, trombone and bassoon), multiple electric guitars, double bass, multiple keyboards and computers, multiple percussion instruments and to crank up the engine and keep it going the incredible force that is Martin Horntveth, the man behind the drum kit. If reincarnation is indeed a truth I pray to whatever gods exist that I NOT come back as Martin Hornthveth’s drum kit! If anyone every pounded a kit harder I can’t remember. I unfortunately never saw Elvin Jones or Art Blakey play, but I have a feeling if they’d seen Martin perform on this night they would have smiled a big, approving smile and given him a huge “well done young man!” During our interview Martin had said something along the lines of “Our desire when we play live to make sure the audience is dancing and screaming!” I mentioned that people on the Titanic were also dancing and screaming but the boys were undeterred, they demanded that they go on with the performance anyway.

I end this little tome with one major, personal thought. At times during this performance when the electric instruments were blazing, the drums were pounding, and the horns were blaring…when the marriage of acoustic and electric were in perfect marriage…during passages of improvisation that lasted for 30 seconds or so, sometimes for just a few bars, I feel that I heard what I’ve been looking for since I first found myself loving jazz…the true future of this music, not just modern but timeless and a glimpse at what will be thought of as jazz when I’m long gone. A moment of discovery like this doesn’t come very often. I’ll continue to love jazz always hoping to experience this again. By the way, I’m seeing Jaga Jazzist again tonight in New York City!

Organ trios and quartets were ubiquitous by the mid-1960s. In African American neighborhood bars and clubs up and down the East Coast, throughout the Rust … END_OF_DOCUMENT_TOKEN_TO_BE_REPLACED

Terence Blanchard looked around the restaurant table and launched into a gentle sermon about jazz education in Detroit that was part homily, part pep talk, … END_OF_DOCUMENT_TOKEN_TO_BE_REPLACED

Creating a program of solo piano music is the ultimate challenge for any improvising pianist. The music on my latest album, Ways of Disappearing (Sunnyside), … END_OF_DOCUMENT_TOKEN_TO_BE_REPLACED

First the good news: As you can see in our annual Festival Guide, there are plenty of jazz festivals scheduled to happen around the world … END_OF_DOCUMENT_TOKEN_TO_BE_REPLACED