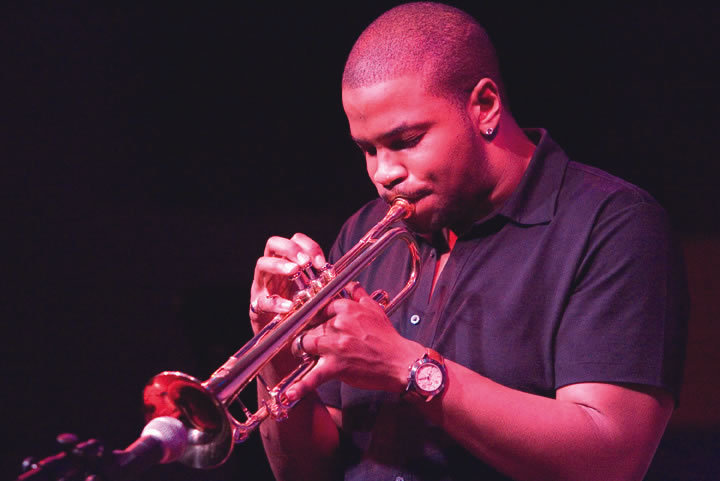 Most of my music listening time at this year’s Montreal Jazz Festival has been spent inside the various beautiful concert halls and clubs, but there is to no way to ignore or underestimate the joys of the free music happening on the many outdoor stages randomly scattered around the festival grounds in the Place des Arts. During one of my strolls through the grounds I happened upon a quartet of funky Quebec kids who call themselves 4105 Quartette de l’Uqam. It was the music that first got my attention from afar as I heard some funky sounds filling the air and being a sucker for electric improvised music of a groove-oriented nature I thought I’d check it out for a while. It was time well spent.

The band featured a charming young lady behind a piano-electric keyboard set up and three of her funky, young friends including a guitarist who was absolutely on fire with the funk. They were playing familiar tunes and putting their own stamp on them and closed out the set with a song by Stanton Moore, the great drummer and composer from New Orleans and the bands Galactic and Garage-A-Trois. Anyone who wants to play some Stanton Moore for me is my friend and I was most impressed with this 20-something quartet, their spirit and ability. I felt like the future of groove is alive and well in Montreal and this was a great start to another wonderful night of music here in Montreal that would take me to Africa and beyond. First stop, The Gesu Theatre.

Violinist Regina Carter’s beautiful collection of African folk songs taken to the jazzy side titled Reverse Thread is one of the great releases of the past couple of years in that is a delightful concept beautifully executed and played with a sincere spirit that is modern though true to the original form and idea of the music. Just after the album was released I had seen Regina perform this music at the club Dizzy’s in New York featuring a kora player from Africa who was simply brilliant. So when I entered the hall and saw no kora among the instruments on stage I was a bit let down. Again, I need to be more patient and trusting of an artist the stature of Regina Carter. She was not going to let any of us down on this evening as she was joined on stage by a quartet of masters on harp, accordion, drums and bass that would more than make up for anything that I might have perceived as lacking. The harpist was an associate of Regina’s from decades before who she said she’d always wanted to collaborate with again. Well, the wait to work with him was well worth it as he filled every space that the kora could have filled and more.

The night began with a piece that was a great reminder of Regina’s classical training. She is, after all, the first woman and American to be invited by the Italians to play Paganini’s famous violin “The Cannon.” From there the night progressed into the music of Reverse Thread including Regina’s thoughtful introductions complete with field recordings of the songs followed by the band’s renditions. All in all the performance was as uplifting and satisfying as any I’ve seen at the festival this year and certainly as enjoyable as the original show at Dizzy’s. When you hear music that well played by a loveable person like Regina who is so talented and sincere in an atmosphere like The Gesu you simply can’t be unhappy. I’d listen to this same performance again if I could!

I ended the night once again in the cool environs of the Club L’Astral for the electric side of California-born trumpeter Jeremy Pelt. His latest album, titled The Talented Mr. Pelt, gives us his mostly acoustic side out of the mold of, say, Freddie Hubbard. So when he took the stage at L’Astral with his VERY electric quartet Wired he felt that he needed to announce a disclaimer that some of his fans might have been misled in some way and that “If you came to hear my quintet I’m sorry.” He felt it was time to plug things in and bring the band with which he recorded his 2007 electric live album Shock Value: Live At Smoke to Montreal. Nope, you were not gonna hear a swinging acoustic set on this night as the only acoustics came from the thunderous drumming of young Mr. Dana Hawkins while Gavin Fallow’s bass and Frank LoCastro’s electric piano with the addition of various distorting and sound altering devices meshed with Jeremy’s electronically rigged trumpet to create a wall of spatial, electric sound that filled the club all night. Spatial is the name of the game with what Mr. Pelt and company laid down on this night and in the first 45 minutes of the set there were three pieces played beginning with the appropriately titled “Circular.” I say appropriately titled because the 15-minute piece seemed to be structured in a series of repeated segments with slight variations each time around.

Within that structure was plenty of space of each player to contribute what he wanted. This was free electric jazz that had a flow much more than a groove. The second piece titled “Blues” was simply that…a blues and a highlight of the show. The third song in sequence was the same in sequence as on the album Shock Value, with much the same structure, or with the freedom of this music lack of structure, that the rest of the set exhibited. The band is talented and there was lots of interaction between trumpet and keys all night as they led the way into electronic-land. I left the show with the same thought rolling over and over in my mind…”somebody has been listening to Bitches Brew, On The Corner or Live Evil!”

Terence Blanchard looked around the restaurant table and launched into a gentle sermon about jazz education in Detroit that was part homily, part pep talk, … END_OF_DOCUMENT_TOKEN_TO_BE_REPLACED

Creating a program of solo piano music is the ultimate challenge for any improvising pianist. The music on my latest album, Ways of Disappearing (Sunnyside), … END_OF_DOCUMENT_TOKEN_TO_BE_REPLACED

First the good news: As you can see in our annual Festival Guide, there are plenty of jazz festivals scheduled to happen around the world … END_OF_DOCUMENT_TOKEN_TO_BE_REPLACED

Steve Lacy was once a brilliant bebop player. Yet conventional wisdom says the opposite. Many have long argued that a key to the innovative soprano … END_OF_DOCUMENT_TOKEN_TO_BE_REPLACED