Skip to content
Become a member and get exclusive access to articles, live sessions and more!
Start Your Free Trial
Home > Features > Dave Douglas: At Home 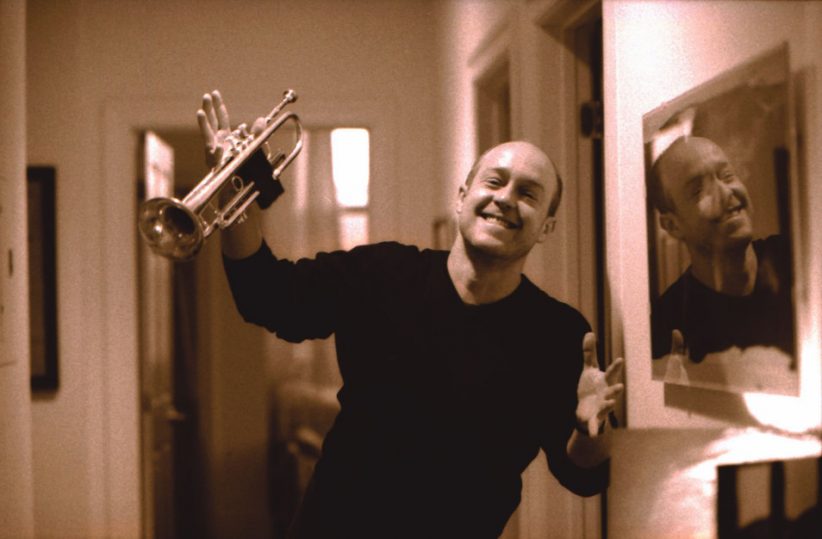 Brooklyn’s Park Slope region is as laid-back as its name, befitting the serene demeanor of one of its residents, trumpeter Dave Douglas. “It’s a residential neighborhood, about a block from Prospect Park, which is a fairly wild expanse of green in Brooklyn,” Douglas says as an airplane roars by. “As you can hear, there’s a flight path overhead. It’s a really mellow neighborhood, and there are a lot of musicians who live here. It’s, maybe, 20 minutes by subway from downtown Manhattan.”

Douglas has lived in Park Slope for 10 years, seeing it transform from an artists’ community to one of the hottest real-estate areas in New York City. Douglas bought his current place about three years ago. “It’s a [three-bedroom] apartment in an old clock factory, which I think is really kind of cool and ironic: we’re always practicing with a metronome and worried about timekeeping,” he laughs. “It’s not like a brownstone building; it’s a factory and the ceilings are high, so in between floors there are these concrete barriers, which makes it such that I have a room that I can practice in.”

The six-floor, 35-unit building means Douglas has plenty of neighbors, but the factory’s thick walls mean he doesn’t have to worry about bothering them when he practices—not that they’d mind. “I went to this meeting maybe six months after I moved in and said, ‘I’m really sorry about the noise, and I hope you don’t mind.’ And they said, ‘What are you talking about?’ And I’m practicing trumpet in there full blast.” Later, Douglas says, his neighbors kept listening for his performances, but to no avail. “They said, ‘We keep waiting; when are you going to practice? We keep waiting for our free concert. Why don’t you open a window?'”

Those windows are huge, too, giving “a view of lower Manhattan, which was incredibly spectacular until [Sept. 11]. And I was home when that happened, watching it from my window,” Douglas says. The apartment is on an upper floor, “so most of the view is just sky. I like that. It clears my head.”

Another head clearer, and cheerer, in the apartment is the brilliant yellow living room. “That room gets the least light in the house, so I wanted to paint it a brighter color,” Douglas says. “I tend to like primary colors. I read a little bit about feng shui, and I feel that there’s a way to make a room feel comfortable, and [color] is part of it.”

Though he tries to keep the rooms open and the clutter to a minimum, it isn’t easy for a musician who works away from home as much as Douglas does. “Instead of going out [on tour] for two months, I try to make all my tours two weeks or less. So a lot of time I’ll come in for two days, do my laundry and leave again; stuff tends to accumulate, unfortunately.”

Some of the things the wide-eared Douglas doesn’t mind accumulating include sound systems of various shapes and sizes “in every room in the house,” he says. “Some rooms it’s just a boom box. Some rooms it’s a really nice—I work with [recording engineer] Joe Ferla and he hooked me up with a pair of ProAc speakers, so I have a really good system in the living room. In my music room I have a pretty decent, simple Sony system. In the bathroom I have my old set of speakers and a little receiver and a CD player, so I can take my luxury bath and go through stuff that I need to listen to.” And befitting someone of Douglas’ Zenlike temperament, he admits, “Sometimes I find I’ll have several things playing in different rooms of the house all at once.”

Computer? “I just got an [Apple] iBook [laptop] that has a DVD player, so now I’ll be catching up on my movies on the road, which I’m looking forward to quite a bit. I got an [MP3 player] iPod with it, and it already has 30 albums on it, so now when I leave the house I just pick that up because I know I’ll have plenty of stuff to listen to.”

Wine? “Yes, but not in the house. I find if I buy a few good bottles of wine they don’t stay around very long. To be a collector you have to be willing to buy them and leave them there. I tend to prefer the stronger Bordeauxs and the Italian Montepulcianos and Brunellos. Since I love playing in the north of Italy, I’m starting to get turned on to Teroldego and Marzemino, which apparently was the young Mozart’s favorite.”

Food? “I love north Italian food. My biggest problem is that I like all kinds of food, so I have to find out how to not let that negatively impact my body size and shape. It’s really easy for me to gain weight. I also love sushi. At home it’s all just salads and vegetables—really healthy stuff. I don’t eat red meat; I just can’t handle it anymore. I would love to eat it; it’s not ethical considerations.”

Car? “No way. I had a car for a long time, then I did a cost analysis and it was just crazy. So I just take a cab whenever I’m going home at night, and it still works way cheaper that way.”

Several years ago, one of Danilo Pérez’s students was suffering from tendinitis. Pianist Pérez was then a professor at the New England Conservatory; his student, … END_OF_DOCUMENT_TOKEN_TO_BE_REPLACED

As a JazzTimes writer, I can talk about the powers of a dynamic drummer until I’m blue in the face: the weight of each tom-tom’s … END_OF_DOCUMENT_TOKEN_TO_BE_REPLACED

There are certain works of art with which I wish I could have a conversation, so that I might express my gratitude for them. I … END_OF_DOCUMENT_TOKEN_TO_BE_REPLACED