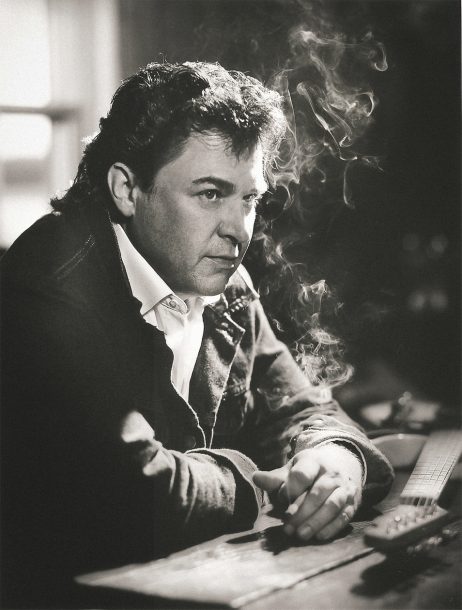 Guitarist Joel Harrison considers the late Danny Gatton (Sept. 4, 1945-Oct. 4, 1994) not only a seminal influence on his own playing but on his life. Gatton, a gifted musician for whom genres blurred and musical possibilities were endless, is featured in Anacostia Delta, a forthcoming documentary film (due next year) exploring the Washington, D.C. music scene Gatton called home. This Saturday, Sept. 26, Harrison will participate in a concert at the Birchmere in Alexandria, Va., celebrating the life of Gatton. The show, which will be filmed for inclusion in the documentary, will also feature John Previti (organizer and Gatton’s bassist), Tom Principato, Dave Elliott (drummer of Gatton’s group the Fat Boys), Anthony Pirog, Dave Chappell and others. In advance of the concert, Harrison recalls the impact that Gatton’s music had on him and so many others-and why we will never see the likes of him again.

Danny Gatton played the guitar like his hands were on fire.

At 14 he was already playing professionally, and at 16 shaming men three times his age. He learned everything by ear, never read music, took almost no lessons. His mother would put on Roy Clark: “Hear that,” she’d ask? “You have to be better.” And soon enough he was. A torrent of ideas poured from Danny when he improvised, as if he couldn’t get them out fast enough, and he could always see ahead to where a solo was going, like he had a mental GPS, and it gave his sound authority and pinpoint accuracy.

Danny could remember hearing music in his head as an infant, as if angels were singing to him.

It’s September 1978, at the Cellar Door, Washington, D.C.’s preeminent music club, and Gatton and pedal steel player Buddy Emmons are trading choruses on the song “Rock Candy Mountain.” The band is Redneck Jazz Explosion, and Gatton is in peak form. It’s a 12-bar blues played extremely fast, and the audience is barely stifling screams of excitement as the tension mounts, each soloist attacking the timeless progression with his own virtuosic imprint. Close your eyes and you can hardly tell where one leaves off and the other begins. Emmons uses the metal slide to dip, bend and weave between notes, while Gatton uses the fingers of his left hand to pull off those same sounds, and both of them play a complex idea so fast and clean that it startles you, makes your eyes go wide. Bebop harmony running head on into country twang, pure American ecstasy, as both players pull out tricks to up the ante, and you don’t want it to end; it’s too amazing, too much fun, like watching two Olympic sprinters, but it’s no footrace, it’s music.

Danny’s shows were a sonic amusement park, a rollercoaster of six-string hijinks, like the beer bottle used as a slide, foam spraying all over the neck, licks that would bend and distort and create shapes you didn’t think were possible, like he had seven fingers.

Except it was also incredibly serious-he was doing things that no one had ever done, playing American guitar music in a way that made other players seem like puzzled novices. Danny was an encyclopedia of styles, effortlessly conjuring jazz, country, rockabilly, blues and rock ‘n’ roll in one solo, the seams invisible. But you never had any sense that he was showing off, or posing as a “guitar hero,” because he was the most unpretentious, laid back, who-gives-a-fuck guy imaginable.

How did he make it look so easy, like he wasn’t trying? I’d go into a kind of hysteria when he plugged in, early on when no one knew who he was. Young as I was, I still knew that a player like Danny wasn’t coming around twice. I thought I could learn to play like him, but I couldn’t-no one could, and in fact that sentiment became a D.C. cliché.

Those days you’d pay $3, if that, to see him at some dump like the Psyche Delly Inn, a greasy-spoon lunch joint with a charmless music room in back in Bethesda, Md. It was 1974, I was 17, but no one carded me. His band, the Fat Boys, might stretch one tune for 30 minutes, the “Mystery Train” medley or some trifle that he turned into a rockabilly epic like “Ubangi Stomp.” Danny might take three solos in one tune, all of them completely different. He’d curl his hand over the top of the neck and play upside down, then do octaves in 16th notes, get a slapback delay going, bust out the Heineken bottle, splash complex jazz chords inside a rocking blues shuffle, build a 10-chorus solo on “Stormy Monday” that caused young aspirants to shout for joy. He’d moan and cry through “Harlem Nocturne,” make you shudder with his piercing tone.

When he took his own life in 1994, I was depressed for weeks. It was personal.

If Danny couldn’t make it, how could I? I don’t mean make it onto the cover of Guitar Player magazine. I mean make it as a creative human being on planet Earth. It made no sense to me that someone who brought this much joy to so many others could succumb to such deep despair inside himself.

The joy of Danny’s music still lives inside my fingers, inside the fingers of a thousand other players, some who saw him, some who didn’t. He lives on computer screens and bootlegs, on little-known VHS tapes, on vinyl and CD. He lives in back alleys and bars from Manassas to Truckee, in beat-up Telecasters, maple guitar necks burnished dark from smoke and sweat played on small beer-soaked, ramshackle stages. He lives in his daughter, his wife, his band mates, his hometown. He lives in the river of sound that flows from the primal, perpetual underground spring that feeds all America, that washes through our veins, currents of rhythm and melody that push back the dark veil and deliver us into light.

For more information on the documentary and Saturday’s concert, visit Anacostia Delta.

Organ trios and quartets were ubiquitous by the mid-1960s. In African American neighborhood bars and clubs up and down the East Coast, throughout the Rust … END_OF_DOCUMENT_TOKEN_TO_BE_REPLACED

Terence Blanchard looked around the restaurant table and launched into a gentle sermon about jazz education in Detroit that was part homily, part pep talk, … END_OF_DOCUMENT_TOKEN_TO_BE_REPLACED

Creating a program of solo piano music is the ultimate challenge for any improvising pianist. The music on my latest album, Ways of Disappearing (Sunnyside), … END_OF_DOCUMENT_TOKEN_TO_BE_REPLACED

First the good news: As you can see in our annual Festival Guide, there are plenty of jazz festivals scheduled to happen around the world … END_OF_DOCUMENT_TOKEN_TO_BE_REPLACED