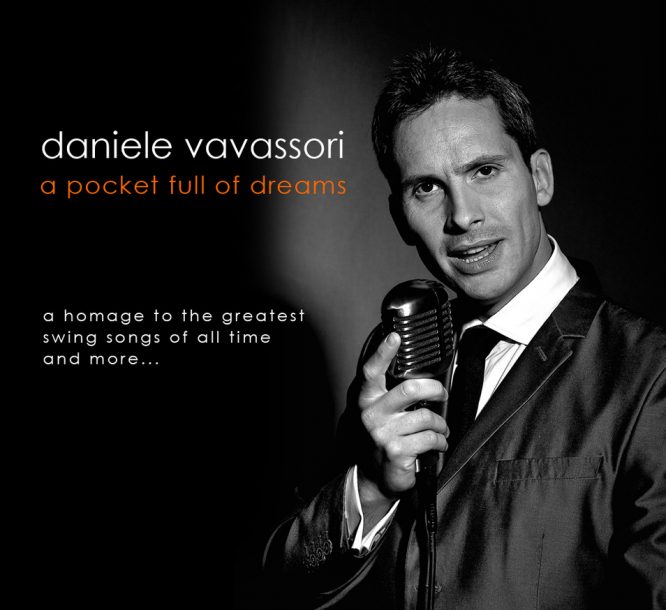 The irony of the great Italian crooners – Sinatra, Martin, Bennett, Damone, Darin, Como, et al. – is that none actually hailed from Italy. Indeed, apart from one-hit-wonder Domenico Modugno, whose chart-topping “Volare” earned him a pair of 1958 Grammys for Record of the Year and Song of the Year, the ranks of Italian-born pop and jazz vocalists whose careers have extended beyond the borders of their native land are pretty thin. (Nor is the female side of the equation any more robust; quick, name an Italian vocalist, apart from Roberta Gambarini, who has earned an international audience).

Which makes newcomer (or, at least, new to American shores) Daniele Vavassori a bit of an anomaly, though a most welcome one. Nothing in Vavassori’s musical background points to his recent emergence as a jazz stylist. Yes, his grandfather introduced him to Sinatra and Como recordings, but he preferred Queen, Billy Joel and Tori Amos. Early on, he began writing songs and formed the rock outfit Liberty (subsequently expanded to Liberty Express). In 2005, he joined the band PLC, whose Rock Surgery earned significant notice.

It wasn’t until earlier this year that Vavassori became fascinated with swing melodies, an interest that led him to jazz. With guitarist Sandro Gibellini, bassist Marco Ricci and drummer Stefano Bertoli, the 33-year-old has since recorded A Pocket Full of Dreams (4My Records). Sung entirely in English, the album is, he says, “a tribute to the great swing songs of the 20th century.” Perhaps. The Gershwins’ tenderly regretful “But Not for Me,” Sacha Distel’s ruminative “The Good Life” and the Isham Jones-Gus Khan chestnut “It Had to Be You” don’t immediately suggest hard-core swing (though, admittedly, all have been swung over the years).

Semantics aside, Vavassori choice of nine standards is solid, if eclectic. (Indeed, A Pocket Full of Dreams may mark the very first time that “Let It Snow, Let It Snow, Let It Snow” has been included on a non-Christmas album). He opens with Dave Frishberg and Johnny Mandel’s lilting “Little Did I Dream.” The voice is unexpected. This isn’t the muscular crooning of Sinatra or Martin or Darin, or even the softer Como. Vavassori’s light, bright sound is closer to that of early ’60s pop star Gene Pitney, though his emerging jazz instincts are keen enough to also hint at the rhythmic gentility of John Pizzarelli.

Vavassori ignites “For Once Is My Life” at mid-tempo, slowly escalating to full, blistering swing, effectively embracing the lyric’s unfettered romantic optimism. “It Had to Be You” comes enfolded in downy tenderness, as does “The Good Life.” Burton Lane and Alan J. Lerner’s delightful “You Are All the World to Me,” a too-rarely performed list song introduced by Fred Astaire in Royal Wedding, is the standout track, navigated with gleeful warmth.

Ushered in on a thunderous drum-roll, “The Way You Look Tonight,” though not radically different from dozens of preceding interpretations, is winningly effervescent. Likewise, “Steppin’ Out With My Baby,” which seems an amalgamation of the Astaire and Bennett versions, packs plenty of verve. The sole original tune, “Run,” is a deceptively breezy affair, built around a cleverly self-deprecating narrative. For the closing “But Not for Me,” Vavassori reverts to the easy bounce of the album’s opener. Lovely as it is, it fails to capture the song’s dark-clouded despondence.

As a first-time effort from a newcomer to jazz, A Pocket Full of Dreams is unquestionably creditable. Vavassori may never have the makings of a Sinatra or Bennett; but he could, if fates allow, establish a strong foothold in the Michael Bublé camp. And, like Bublé, he is likely to grow increasingly assured and impressive.

If you’d like to share your comments about Daniele Vavassori or have suggestions for future installments of Hearing Voices, please direct your email to [email protected]

Organ trios and quartets were ubiquitous by the mid-1960s. In African American neighborhood bars and clubs up and down the East Coast, throughout the Rust … END_OF_DOCUMENT_TOKEN_TO_BE_REPLACED

Terence Blanchard looked around the restaurant table and launched into a gentle sermon about jazz education in Detroit that was part homily, part pep talk, … END_OF_DOCUMENT_TOKEN_TO_BE_REPLACED

Creating a program of solo piano music is the ultimate challenge for any improvising pianist. The music on my latest album, Ways of Disappearing (Sunnyside), … END_OF_DOCUMENT_TOKEN_TO_BE_REPLACED

First the good news: As you can see in our annual Festival Guide, there are plenty of jazz festivals scheduled to happen around the world … END_OF_DOCUMENT_TOKEN_TO_BE_REPLACED