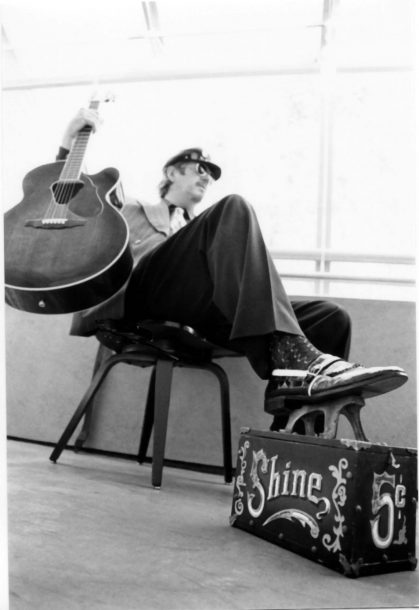 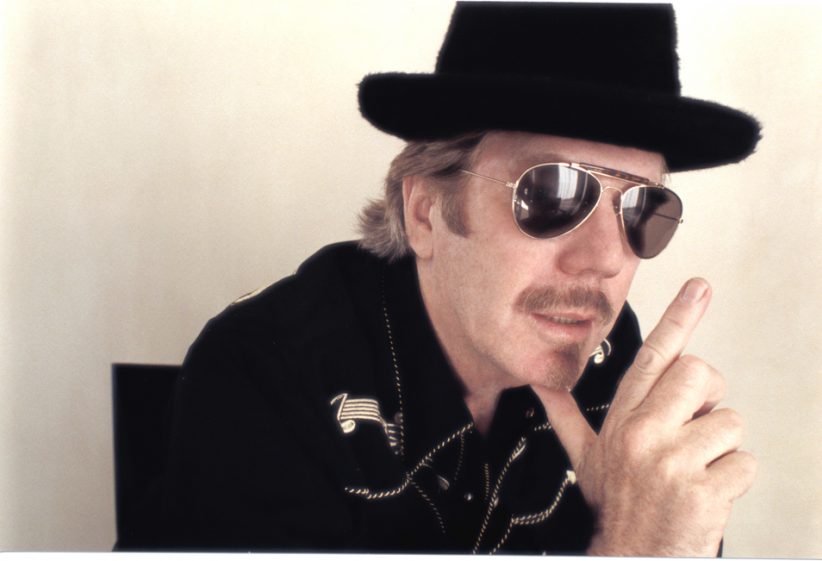 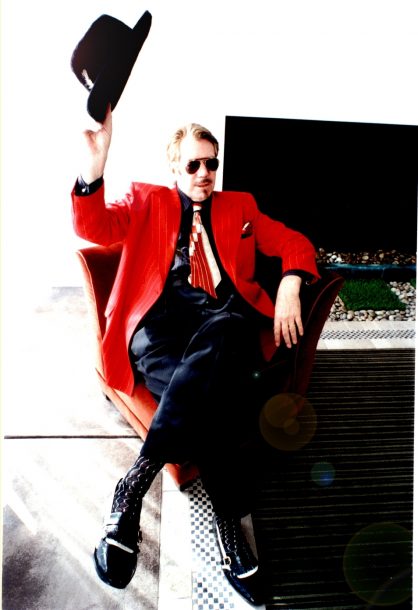 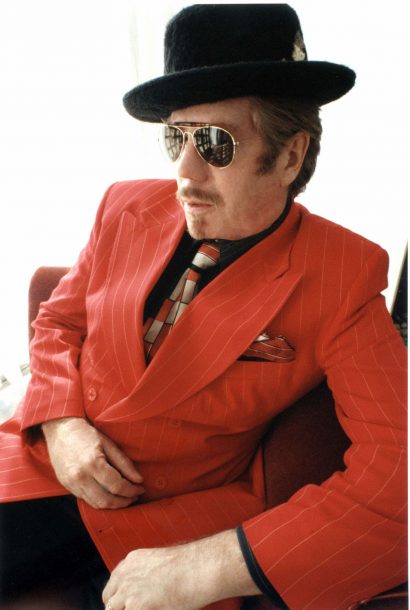 Dan Hicks digs Christmas tunes. But it took him over 30 years in the music business to get around to doing his own album of holiday music. The singer/songwriter/guitarist and leader of the Hot Licks, a swinging band with a cult following in the rock world going back to the ’70s, has just released Crazy for Christmas on Surfdog Records and is on his way around the country on a tour he calls “Holidaze in Hicksville”. The group will perform at a mix of theaters, clubs and coffeehouses, including the Barns at Wolf Trap in Vienna, Va., the City Winery in New York City and McCabe’s Guitar Shop in Santa Monica, Calif.

Talking via phone from his home in Marin County, California, Hicks says that he’s always done Christmas tunes during that time of year with his band, the Hot Licks. “I’ve been doing Christmas songs with the Hot Licks for a couple of decades. We did about eight or ten tunes, but we didn’t do them all at once. We’ve been doing shows we call Holidaze in Hicksville. We have a canvas backdrop with a cartoon scene of Christmas.”

During the holiday season, he also moonlights with a local group called the Christmas Jug Band. “It’s a group of professional guys that play once a year and we’ve been doing that since the late ’70s,” Hicks explains. That’s really where I got started doing the Christmas tunes. I think the first one I did is ‘Somebody Stole My Santa Suit.’ We started out with parodies and rewrites. We’ve done about five albums through the years. It started out as vinyl, then cassette and later CDs.”

There are several of those parodies and rewrites on this album including “Santa Got a Choo-Choo” which uses the melody of “Choo Choo Ch’Boogie” and “Christmas Morning” with new holiday lyrics for Hicks’ own “Where’s the Money.” In addition, he covers a few Christmas classics, such as Steve Allen’s “Cool Yule,” made famous by Louis Armstrong, and “Here Comes Santa Claus.” “There are a bunch of those that fit my style,” says Hicks. “I also try to make my style go into Christmas songs.” Sure enough, Hicks’ rendition of “Run Rudolph” is a great example of refashioning a holiday song associated with a particular artist (in this case, Chuck Berry) and giving it the Hicks treatment, an easy-going swing style along the lines of Slim Gaillard or Leon Redbone, with warmth, humor and perhaps a touch of irony.

One tricky problem with Christmas albums is that in order to be released in time for the holidays they have to be recorded at a less than wintry time of year. Hicks says that he recorded Crazy for Christmas in April, but he didn’t find it too hard to get into the right state of mind for the material. “I knew the subject matter and I knew what we had to do,” says Hicks. “It was more like music, you know, rather than talking about Christmas.” He also says that it may have helped that he started working on the album right after Christmas, doing arrangements and pre-production. “Maybe it was still Christmas for me,” he adds.

Those arrangements feature your basic swing jazz band instrumentation (guitar, piano, bass and drums) with one noticeable addition: the kazoo. Hicks chuckles when asked about the inclusion of that populist and often scorned instrument. “I swore once that the kazoo would never be on my bandstand,” he says. “But somehow the two girls doing kazoos makes it. Now I got the kazoo every now and then with that ‘kazoo duo,’ but hardly ever a kazoo alone. The kazoo is a staple of the jug band so I hear enough of it with that band. I hear enough, period. Who doesn’t? You never hear it and it’s still enough.” Given that pronouncement, can he think of anything particularly positive to recommend the kazoo? He thinks for a moment. “It’s sort of like singing, though more like falsetto for a guy. You can scat on it and get musical ideas going. You can play it like an instrument and take a solo. That’s a plus.”

The kazoos are played by his back-up singers, the Lickettes, who are accomplished jazz singers in their own right: Daria and Roberta Donnay. Singing harmonies and counter melodies, the two provide an important complement to Hicks’ often idiosyncratic lead vocals. Pre-bebop era jazz may be the foundation of the group’s sound, but Hicks himself has much broader interests. “Well, I’m glad to be talking with a jazz magazine,” he says, “because I’ve always wanted to be a jazz guy. I also do standards with a group called Bayside Jazz. I was a jazz drummer way back in my history.”

The Hot Licks group is doing about a dozen shows on this tour, from Rhode Island to California. That’s a whole lot of Christmas, but Hicks says he finds the shows work best if they’re not all painted in red and green, so to speak. “I’m going to sprinkle the set with Christmas stuff,” he says. “I always do the songs that are associated with me, ‘I Scare Myself’ or ‘How Can I Miss You When You Won’t Go Away?’ or ‘Canned Music.’ I couldn’t take it either if I had to do the whole night of Christmas music.”

For his own Christmas celebration when he returns home, Hicks admits that he doesn’t do anything particularly different from any of us. “I’ll go over on Christmas day to my wife’s parents’ house. Most of my Christmas is wrapped up in the music, but I give presents to a couple of close people. I send out a postcard every year to about 200 people. I either do a collage or graphic design drawing. For the last few years, I’ve been doing a takeoff on the word jumble that you see in newspapers.” But no falsely modest yet boastful newsletter, right? “No, I don’t do that. No newsletter like-‘Patty spent a year in Afghanistan and almost got arrested. Whew, that was close. She’s now at MIT. Boy, are we proud.’ No, thanks.”

Hicks says that he has a few of his own holiday music favorites, including Charles Brown’s Christmas album [the singer/pianist, not the cartoon character] and a Django-style gypsy guitar Xmas CD. He also confesses to owning the Chipmunks Christmas album. He mentions one obscure album by an artist with whom he shares some sensibility. “I’ve got one by Harry the Hipster Gibson,” Hicks says. “It features a lot of him singing just by himself.”

Speaking of hipsters, I tell Hicks about Armstrong’s reading of “Twas the Night Before Christmas,” said to be one of Pops’ last recordings, in the hopes that Hicks might consider working his magic with that piece. After all, with his languorous and sonorous voice, Hicks would be a perfect narrator for such a piece. In the meantime, audiences can check out the Hot Licks getting Santa-fied at the shows listed below. And we can all hope that that we won’t have to wait another thirty years for the followup to Crazy for Christmas.

Organ trios and quartets were ubiquitous by the mid-1960s. In African American neighborhood bars and clubs up and down the East Coast, throughout the Rust … END_OF_DOCUMENT_TOKEN_TO_BE_REPLACED

Terence Blanchard looked around the restaurant table and launched into a gentle sermon about jazz education in Detroit that was part homily, part pep talk, … END_OF_DOCUMENT_TOKEN_TO_BE_REPLACED

Creating a program of solo piano music is the ultimate challenge for any improvising pianist. The music on my latest album, Ways of Disappearing (Sunnyside), … END_OF_DOCUMENT_TOKEN_TO_BE_REPLACED

First the good news: As you can see in our annual Festival Guide, there are plenty of jazz festivals scheduled to happen around the world … END_OF_DOCUMENT_TOKEN_TO_BE_REPLACED