Skip to content
Become a member and get exclusive access to articles, live sessions and more!
Start Your Free Trial
Home > Features > Dafnis Prieto’s “A World of Rhythmic Possibilities” 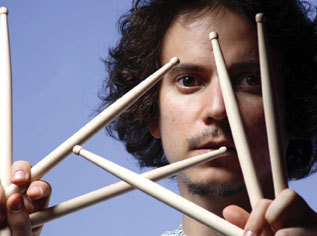 The Cuban-born drummer-composer Dafnis Prieto recently released a book (and audio/video) project with the apt title A World of Rhythmic Possibilities-apt because the 275-page resource covers a wide swath of jazz and Afro-Cuban traditions, and features both brass-tacks transcriptions and musical-philosophical ponderings. This excerpt, an instructive meditation culled from Prieto’s lifetime of listening and playing, tilts toward the latter.

I would like to focus attention on the “illusive” (illusory or illusionary) quality of rhythms and patterns. As with an optical illusion, rhythmic illusion is a fascinating subject to discuss and analyze.

Sometimes while listening to a recording or a live performance, I find myself intensely absorbed in deciding how to organize the patterns I’m listening to, in reference to their point of orientation. Since the same rhythmic structure can be perceived and interpreted differently, I carefully consider where to direct my attention in order to capture the intended rhythmic meaning behind those patterns. I challenge myself to remain rhythmically alert.

Below are two simple strategies I use in organizing such rhythmic ambiguity:

• I focus my attention on the more steady patterns (clave, bell patterns, maracas, shakers and so forth), in relation to how the rest of the rhythms “collide” with one another.

• I focus my attention on those instruments that are improvising on top of the rhythmic structure. I listen for the start and end of the rhythmic phrasing played by the improviser(s). This also includes the chorus or the lead vocals.

These two strategies have helped me clarify and organize many rhythmic confusions and ambiguities. However, at other times they cause even more disorganization, disorientation and incomprehension. When this is the case, I turn to the next two strategies to discover the rhythmic orientation.

• I share my confusion with someone else who might have a different rhythmic perception than I. That way I can hear another person’s perception of those same rhythms.

• I delve deeper into these rhythms by researching their cultural environment, related dances and the languages that normally accompany those rhythms.

This rhythmic disorientation happens mostly when listening to rhythms I’m not familiar with, regardless of their complexity. I have discovered many possible points of rhythmic orientation while listening to new rhythms that I have little or no previous exposure to. As a result, I experience ambiguity, disorientation and so forth, resulting in a rhythmic illusion. This kind of experience is one that always takes me by surprise, because I’m not making a conscious effort to reach this state of illusion. It simply happens while looking for the pattern’s fundamental point of orientation.

Surprisingly enough, however, the same disorientation can also happen with familiar rhythms. I wonder then-how can I experience or even create a change in my perception toward rhythms and patterns that I already know?

Several years ago, one of Danilo Pérez’s students was suffering from tendinitis. Pianist Pérez was then a professor at the New England Conservatory; his student, … END_OF_DOCUMENT_TOKEN_TO_BE_REPLACED

As a JazzTimes writer, I can talk about the powers of a dynamic drummer until I’m blue in the face: the weight of each tom-tom’s … END_OF_DOCUMENT_TOKEN_TO_BE_REPLACED

There are certain works of art with which I wish I could have a conversation, so that I might express my gratitude for them. I … END_OF_DOCUMENT_TOKEN_TO_BE_REPLACED