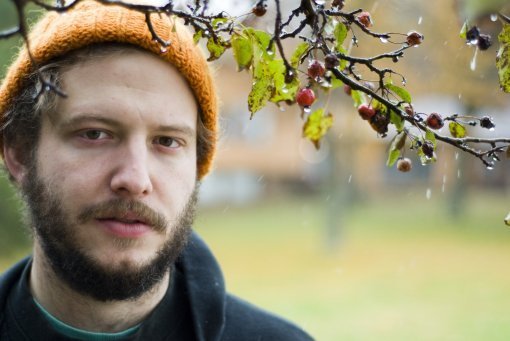 Here’s an extracurricular assignment: Point your nearest web browser to YouTube and seek out clips of a spring 2009 concert by the Memorial High School Jazz Ensemble, from Eau Claire, Wis. The footage is dim and wobbly, probably filmed by a dad with an iPhone, but what it shows is your prototypical varsity big band in semiformal attire, joined by a vocalist in dapper white. The guest singer is Justin Vernon, Eau Claire Class of 1999, better known elsewhere as the indie-rock troubadour Bon Iver. In one of the clips he’s singing Buddy Johnson’s “Since I Fell for You” over what sounds like a stock arrangement, shifting between his spectral falsetto and a barking chest voice, as if to achieve some Upper-Midwestern amalgam of Nina Simone and Ray Charles. It’s great.

And it wasn’t idle stunt programming: The concert had been set up to raise funds for a trip to New York City, where Memorial High was to compete in the Essentially Ellington High School Jazz Band Competition. Vernon had personal experience on that front, as the guitarist in the school’s very first delegation to Essentially Ellington 10 years prior. It’s no wonder he sounds so casually in his element crooning standards-even if his own music bears no tangible relation to the standard songbook or, for that matter, any outright trace of jazz. His homecoming can be studied more carefully on a live recording of the show, A Decade With Duke, which was released later in 2009, earning notices around the blogosphere. “He’s just another failed jazz guitarist!” wrote NPR’s Patrick Jarenwattananon of Vernon, in a post titled “Bewitched, Bothered and Bon Iver-ed.” Less impishly, he suggested that Bon Iver was “proof … of a pet theory of mine: that the precepts of jazz education are secret ingredients in making possible many of today’s more musically rich rock and pop acts.”

I’ve long harbored that suspicion, too, and it’s worth revisiting as we approach the end of 2011, a year in which some of the most critically acclaimed albums were by indie-rockers with closet jazz backgrounds: not failed jazz musicians so much as gifted scavengers who took whatever they could use from jazz orthodoxy. Their emergence is an unintended consequence of the jazz-educational complex, and another reminder of just how fluid these terms of genre can be.

Alas, there was nothing new in 2011 from Grizzly Bear, a Brooklyn band whose members are almost all acquainted with the jazz-training grind. But there was a luminous new self-titled Bon Iver album, on the Jagjaguwar label. And there were breakthrough releases from tUnE-yArDs, St. Vincent and My Brightest Diamond, three very different groups led by women with impressive chops and expressive ideas. This isn’t another instance of what I like to call Steely Dan Syndrome, where a literate pop group puts its jazz sympathies on display. Jazz, as a known idiom, is really nowhere to be found on these albums. But it hums through the music anyway, as an invisible but vital current.

Let’s start with tUnE-yArDs, if only because rock and pop critics are likely to proclaim w h o k i l l (4AD), its spectacular sophomore album, a consensus pick of the year. Girded with tribal rhythm, ping-ponging counterpoint and deftly layered vocals, the album reflects the far-ranging interests of Merrill Garbus, tUnE-yArDs’ mastermind. One song on the album, “Es-so,” has a cavalier harmonic complexity that reminds me of Joni Mitchell’s mid-’70s jazz flirtation, but otherwise the music skews starker and springier. Darcy James Argue, the progressive young big-band composer, is on record as a fan.

Garbus has tenuous jazz credentials at best, but her only fulltime bandmate, bassist Nate Brenner, is the son of a boogie-woogie piano player and a product of the jazz program at Oberlin. Brenner co-wrote almost half the songs on w h o k i l l, and his own band Beep, out of Oakland, influenced the album’s style. On tour, tUnE-yArDs now features not only Brenner but also two saxophonists: Matthew Nelson (another Oberlin alum) and Kasey Knudsen (Berklee College of Music). And the shows have a thrillingly improvised feel, as Garbus plays fast and loose with a sampler, creating loops.

My Brightest Diamond and St. Vincent are less freewheeling enterprises, but each seems to have internalized jazz harmony and some of its dynamic variability. The former is the nom de chanter of Shara Worden, who went to a school with a famous jazz program, the University of North Texas, though her major was opera. An assured, expressive singer with a finely honed performance instinct, Worden claims jazz as formative. My Brightest Diamond’s new album, All Things Will Unwind (Asthmatic Kitty), features her jewel-like arrangements for yMusic, a New York chamber ensemble.

That same group has backed both Bon Iver and St. Vincent, a.k.a. Annie Clark. Originally from Dallas, Clark picked up her share of guitar tips from her uncle, Tuck Andress of Tuck & Patti, for which she worked as a roadie while still in high school. (She then spent three years at Berklee.) The sound of Strange Mercy (4AD), St. Vincent’s third album, falls far from jazz, yet it’s hard to imagine its harmonic sophistication coming from anywhere else. The same could be said for the many small flourishes that sprout in the music, which have earned her plaudits from the likes of trumpeter Ambrose Akinmusire. (Via Twitter: “St. Vincent you are the bomb!!!”)

And what of Bon Iver? His new album feels less indebted to Duke Ellington than, say, Daryl Hall; it’s the standard of musicianship in his live show that serves as the telltale sign. His band has included saxophonists Mike Lewis and Colin Stetson, both serious jazzmen. And his music, which I love, would hardly be better if it were “jazzier.” One of my favorite moments on A Decade With Duke is his solo version of “A Satisfied Mind,” played with staggering feeling, in tribute to Mahalia Jackson. “This song can teach us a lot about what it’s like to be human, to be humble, to be where we’re from, and to have these kind of experiences that are so special,” Vernon says. Then, implying his bandmates for the evening: “And I want to dedicate it to these guys.”

First the good news: As you can see in our annual Festival Guide, there are plenty of jazz festivals scheduled to happen around the world … END_OF_DOCUMENT_TOKEN_TO_BE_REPLACED

Steve Lacy was once a brilliant bebop player. Yet conventional wisdom says the opposite. Many have long argued that a key to the innovative soprano … END_OF_DOCUMENT_TOKEN_TO_BE_REPLACED

What is a jazz film? Does it have to be a film about jazz and the people who play it? Or can it also be … END_OF_DOCUMENT_TOKEN_TO_BE_REPLACED

Films that tell stories about jazz open a revealing window on the place and perception of the music within popular culture. See Kevin Whitehead’s compelling … END_OF_DOCUMENT_TOKEN_TO_BE_REPLACED