Skip to content
Become a member and get exclusive access to articles, live sessions and more!
Start Your Free Trial
Home > Features > Conjuring Miles Davis at Smoke in NYC with Jeremy Pelt & Friends 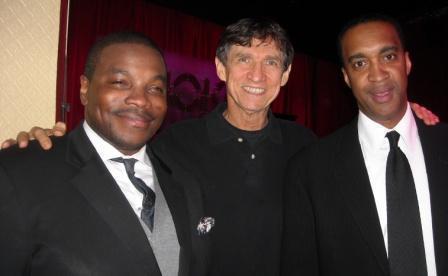 Once, during an interview with the esteemed bassist Dave Holland, the topic of his association with Miles Davis came up. Dave mentioned how often he and so many others spoke of Miles as if he were still around. The spirit of the late, great man was present again on Friday, June 7th at Smoke, the cool and cozy jazz joint on Manhattan’s upper Westside, where I made my way through a torrential rain to take in the latest performance in the annual month-long celebration of Miles that Smoke named “Dreaming in Blue: Miles Davis Festival 2013.” The event runs for over a month actually, this year from May 24 through June 30. Each night during the festival a different group presents a uniquely themed performance covering an aspect of Miles’ ever-changing career from bebop to his modern electric phase. On this evening the great pianist Larry Willis invited four master musicians from different generations to join him to celebrate Miles. Two of Miles’ former associates, bassist Buster Williams and drummer Al Foster were there, along with Javon Jackson and Jeremy Pelt, young lions of the tenor and trumpet respectively. I’d come specifically to have a conversation with Jeremy Pelt, as I’d not had the chance to speak with this young master. I felt this would be a perfect time in his career and an excellent setting, plus I’d heard there was a very tasty menu from which to partake.

Upon entering the very friendly confines of Smoke, which some might call cramped but I call intimate, I made contact with some of the players setting up on stage and made arrangements to speak with Jeremy after the first set. He was sitting down to a pre-show meal of blackened catfish and after finishing this fine repast suggested we start the conversation immediately. My intent was to understand more about his life and career, including the specifics of his most recent release Water And Earth as well as his live album recorded at Smoke, but ended up getting a lesson on what it’s like being a young, Jeremy is 37 now, leader of a jazz group at this challenging time in music business history. Before the set began we had time to cover his early experiences, being born in California but not “of” California, and raised literally and musically in the East. He attended Berklee in Boston and was raised in The Bronx so calling Smoke his neighborhood jazz joint, it’s located on Broadway between 105th & 106th Streets, was totally true.

He felt honored to be sharing the stage with such legendary figures who had been so close to Miles Davis literally and though he’d never worked with Miles he said that no matter what mood he might be in or what musical direction his personal work might be taking he constantly kept the man in mind at all times. I asked if he felt that he and Javon Jackson were, in a manner of speaking, assuming parts in a play with Javon playing Coltrane while he played the part of Miles in the quintet that was just about to take the stage. He answered immediately that this was a tribute but not a regurgitation of Miles classics note for note. If he couldn’t bring his own style, sound and spirit to the job he would not be interested in doing it.

After promising to continue our conversation after the set, Jeremy took to the stage to prove that what he said was absolutely true. He brought a beautiful, black lacquered horn with him and with muted and un-muted playing brought his own unique brand of joy and great style to the set that included tunes like “If I Were A Bell,” Wayne Shorter’s classic “Prince of Darkness,” “Blue In Green” from Kind of Blue and more that brought the spirit of Miles Davis into the room for an hour plus. Larry Willis, who’d never worked with Miles himself but has associations with everyone from Jackie McLean and Dizzy Gillespie to Blood, Sweat & Tears on his resume, was the perfect, versatile veteran to lead a band through the varied styles from standards to bebop to cool to modal and modern groove on this night dedicated to the jazz chameleon that was Miles Davis.

After the set Jeremy Pelt and I continued our conversation beginning with the topic of younger musicians playing with and learning from veterans. He brought up an interesting and defining point related to his relative youth. He is just barely too young to have worked with the likes of Betty Carter and Art Blakey. He’s certainly known by and has worked with a number of veteran players, as he had on this evening at Smoke, but he’s been told by any number of those who studied at the “Art Blakey School of Jazz” that if the man they called Buhaina were alive today he’d have scooped up Pelt and put him in his band immediately. It is a tantalizing thought for Jeremy but he doesn’t regret too much. How can you miss what you’ve never had? Jeremy mentioned that though the jazz scene has certainly evolved over the years the system of youngsters working with the older guys is still in place if the young generation will just put out the effort to network and create associations. He’s certainly done that with his own band of young guns and the effect has been tremendous for all concerned.

We talked about how his album Identity was a major change in trajectory for him as he added electric groove and new song forms to his repertoire. He mentioned how playing in a more traditional, acoustic, swinging style was just as natural to him but embracing change and reflecting the modern world with all its musical possibilities was also natural and essential for one to be a successful jazz man at this point in the history of the music. His albums including Shock Value: Live At Smoke and his latest, Water And Earth are definitive stylistic statements that place Jeremy Pelt’s music firmly in the world of electric groove jazz. This change has been met with a bit of resistance from some of those who want him to stay in the acoustic camp, playing the style from albums like Close To My Heart or Soul. For Jeremy Pelt it isn’t an “Either/Or” question, just like the man who he mentioned was never far from his mind, Miles Davis. And, like Miles, he has received fresh inspiration and learned new lessons from the young guys such as pianist David Bryant, saxophonist Roxy Cross, and drummer Dana Hawkins he’s been working with recently while he teaches them the lessons learned by their 37 year old leader.

We went on to talk a bit about what it’s like to live the life of a 21st century jazz man, with frequent trips to Europe and playing as much as possible in everything from grand concert halls to the funkiest of little jazz joints. The elephant in the room for any creative recording artist today is how to make money producing and selling original music. I know of artists who have basically told me that they see little reason to go to the trouble of recording new albums. I’ve also talked to established, even world famous, artists who have told me that they lose money when they tour but feel they simply must to stay viable. I heard none of the negative side of things from Jeremy Pelt as he’s obviously one of the young guns of jazz today that is burning with ideas and energy and has a great desire to express himself. He’s also eager to play anywhere, any time and mentioned that he’d just gotten back from Europe. The second set was about to begin so I asked Jeremy one last question. I often ask an American jazz musician such as Jeremy to give me their personal statement for the international audience listening to my Voice of America program Jazz America. He simply said “See You Soon!” There you have it…a man with a trumpet who is ready, willing and able to play! Watch out world the talented Mr. Pelt is coming your way! Oh, one more thing…get the fried chicken, collard greens and cornbread at Smoke. It’s AWESOME!

Several years ago, one of Danilo Pérez’s students was suffering from tendinitis. Pianist Pérez was then a professor at the New England Conservatory; his student, … END_OF_DOCUMENT_TOKEN_TO_BE_REPLACED

As a JazzTimes writer, I can talk about the powers of a dynamic drummer until I’m blue in the face: the weight of each tom-tom’s … END_OF_DOCUMENT_TOKEN_TO_BE_REPLACED

There are certain works of art with which I wish I could have a conversation, so that I might express my gratitude for them. I … END_OF_DOCUMENT_TOKEN_TO_BE_REPLACED