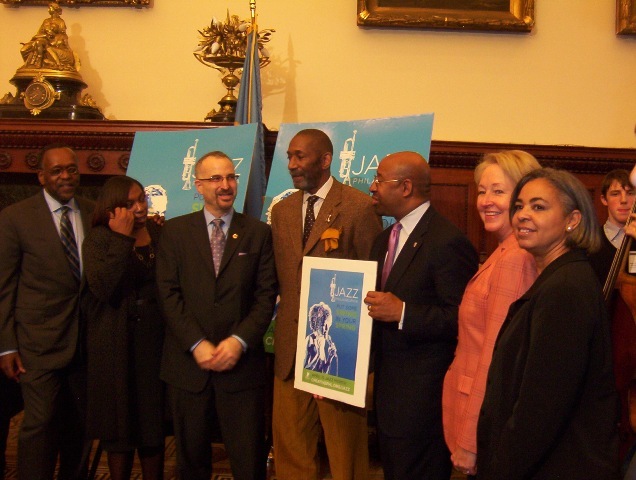 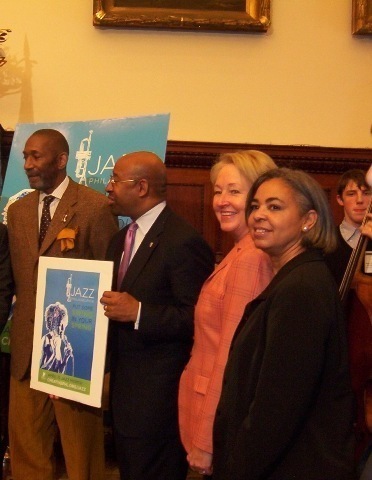 Okay, okay, it probably wasn’t such a great idea to ask legendary bassist Ron Carter to kick off Mayor Michael Nutter’s announcement that henceforth April 11th would be Philadelphia Jazz Appreciation Day when Carter has absolutely nothing to do with the city. And it probably wasn’t a great idea to print out posters and hang banners celebrating the day that featured an unknown trumpeter and singer (stock images?) that had everyone wondering-who the heck are those people? And, it probably wasn’t a great idea to hastily form a group dubbed the Philadelphia Jazz Coalition that was heavy on educational, governmental, and commercial institutions and very light on the town’s grassroots presenters and musicians. But, hey, this is Philly-we ALWAYS start off something new by pissing people off.

Being a kind of anthropological participant/observer at last Monday’s press conference (I was in the group photo representing Jazz Bridge, a last-minute invitee to the coalition too), I quickly noticed the lack of musicians in the crowd. Hmmm, unfortunately, this press party was devoid of the stars of the show that would have demonstrated to Mayor Nutter the vibrancy of our community. Truth be told, a week before the press event, some minor fireworks erupted on Facebook with folks griping about the way things went down with the formation of the coalition.

On April 2nd, Matt Feldman, founder of the Lucky Old Souls jazz concerts at the Moonstone Art Center, initiated a long thread that listed all the people he thought should have been included in the coalition but were snubbed: “Mike Boone, Orrin Evans, Kim Tucker, Rob Henderson,” but then humbly acknowledged that it was hard to compile a complete rendering and he’d probably left a few folks off his list too.

Saxophonist Bobby Zankel wrote, “Our organization has presented over 115 concerts over the years and i still don’t know anything about the coalition.”

But many musicians truly did not know about the press conference at all-a public relations screw up that could have been avoided with more preparation and more knowledge of the jazz community.

On April 11th, singer Denise King wrote on Facebook, “Just curious . . . why is it that MANY in the Jazz community are just becoming aware of this event, especially since it is being called Jazz Day?”

Ron Carter looked uncomfortable (he said he felt “semi-adopted for the day”) when he stepped to the podium to make his remarks about the importance of the Philadelphia jazz community and he kept it short. He named some Philly bassists who had made a historical mark (“Jymie Merritt, Percy Heath, Jimmy Garrison, Spanky DeBrest, Reggie Workman”) and then commented that the current Philly scene wasn’t quite the one of yesteryear when he played at the Showboat and Pep’s in the 1960s, “I played in those rooms. It’s unfortunate they aren’t here. I miss coming to Philadelphia and working the clubs. I’m sorry they don’t have anything going right now.” Wow, Ron, a bit of a downer sentiment wouldn’t you say for such a celebratory event?

But here’s the thing-Philly has lots going on in jazz whether Carter knows about it or not and it was a fabulous idea to create a Philadelphia Jazz Coalition, the brainchild of Gary Steuer, director of the Office of Arts, Culture and the Creative Economy for the City of Philadelphia. Okay, the initial misstep where invites to participate went awry left a lot of musicians walking around saying WTF? But this group could blossom into something very important according to Steuer, who told me that Philly used to recognize jazz month, but in recent years, it had “fallen off the radar.” Steuer feels it’s time to address this cultural lacuna and revitalize the city’s response to and support for one of the town’s greatest tourism resources that has been allowed to lie fallow for too long-our jazz history and the city’s distinct jazz sound. He envisions a possible festival in our future (yes, unbelievably, Philly does NOT have a jazz festival) and increased city involvement in this largely forgotten music community.

Mayor Nutter told the crowd Monday that Philly Jazz Day would serve as a “great platform for recognizing Philadelphia as a world-class jazz city . . .” He’s right. Let’s go for it. Crazier things have happened. This platform just might be the foundation for generating some collective organizational improvisation in the community that will spawn a new jazz renaissance in Philly. And maybe, just maybe, Philly might be known for more than just soft pretzels, cheese steaks and that weird looking guy that dresses up like Ben Franklin.

Here is a short video from the press conference:

Organ trios and quartets were ubiquitous by the mid-1960s. In African American neighborhood bars and clubs up and down the East Coast, throughout the Rust … END_OF_DOCUMENT_TOKEN_TO_BE_REPLACED

Terence Blanchard looked around the restaurant table and launched into a gentle sermon about jazz education in Detroit that was part homily, part pep talk, … END_OF_DOCUMENT_TOKEN_TO_BE_REPLACED

Creating a program of solo piano music is the ultimate challenge for any improvising pianist. The music on my latest album, Ways of Disappearing (Sunnyside), … END_OF_DOCUMENT_TOKEN_TO_BE_REPLACED

First the good news: As you can see in our annual Festival Guide, there are plenty of jazz festivals scheduled to happen around the world … END_OF_DOCUMENT_TOKEN_TO_BE_REPLACED