Skip to content
Become a member and get exclusive access to articles, live sessions and more!
Start Your Free Trial
Home > Features > Club d’Elf at Le Poisson Rouge in NYC: A New Swing 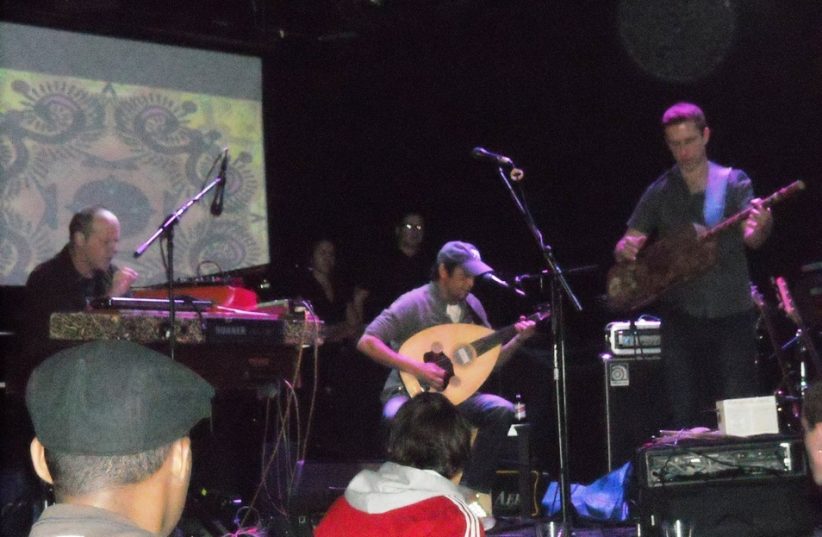 Recently I attended an event staged by The New York Policy Forum, an organization that usually addresses topics of a political nature such as Hydrofracking and Money in Politics. The organizers decided to do something “light and fun” for the holiday season so the topic was “Jazz And Democracy.” I’ll let you ponder the possibilities of levity and humor related to that discussion but I did find it most enjoyable and enlightening. Included in the panel of musicians, broadcasters and educators were T.S. Monk, the famous drummer, composer and educator son of Thelonious, and pianist Helen Sung. You can find out more about it and the NYPF on their Facebook page.

Helen was asked how she got into jazz and she mentioned that she was originally a classical pianist but was captured by the idea of improvisation and the undeniable power of swing. Immediately something profound that another pianist, NEA Jazz Master Kenny Barron, had said to me once during an interview came to mind. He had just released an album of Brazilian jazz recorded with Trio Da Paz and I asked if he felt that some of his contemporaries might give him trouble since he wasn’t “swinging” on this new record. His answer pops in my head quite often since then as it did at the “Jazz And Democracy” forum. He said, “Every kind of music has its own kind of swing!”

I certainly had this in mind as I made my way to the now famous spot in Greenwich Village, Le Poisson Rouge, where all the hipsters meet for, as the club announces, “Art and Alcohol.” It’s at one of the most famous addresses on earth, the corner of Bleecker and Thompson Streets, and is the former home of The Village Gate. The club books everything imaginable including new jazz. I’ve seen Nils Petter Molvaer and Jaga Jazzist there, among others, and on Sunday, December 11th I was there to witness my first live performance by one of the most inventive and ever-changing bands in all of new jazz (I call it MOJA) Club d’Elf, led by bassist Mike Rivard. I had heard most of the band’s live recordings as well as their brilliant, first studio album Now I Understand from 2006. But their 2011 project, the 2-CD set titled Electric Moroccoland/So Below, had put me over the top. One disc is more world-music & jazz in nature and the other jazzier with guitars and horns in a more familiar groove-oriented style. The songs are great, the playing superb, the variety obvious but the main thing is that the spirit of the music is so strong and unique. There is simply not another Club d’Elf on the planet.

I’d been trying to find a time and place to have a conversation with Mr. Rivard for years but as he’s based in the Boston area and is always on the go it hadn’t been easy until the evening of the performance on this Sunday night. Mike has the appearance of your next-door neighbor that you’ve always known. He has an unassuming, friendly, pleasant air about him that belies the fact that he’s one of the most erudite, intelligent, worldly and deeply creative individuals you’re ever likely to come across. We got right down to business and in two minutes he’d given me a very complete story of how he’d come from Minnesota to Boston to attend The Berklee College of Music and never left the Northeast. He’s made the acquaintance of many important fellow musicians who have led him to investigate various forms of world music, rock, jazz, funk, electronica and other styles. All of this has contributed to the variety in his activities in general and specifically in the music of his most important personal project, the brilliant aggregation that is Club d’Elf.

Club d’Elf, by Mike Rivard’s admission, really is a “club” of inventive musicians, not a set lineup of players per se, and over the years there have been about 100 people who have at one time or another been a “member” of the club. The project began in 1998 when Mike and an ever-changing cast of characters started a regular, weekly stint at the Cambridge, MA club The Lizard Lounge. The original idea was to play nights of mostly improvised “Trance” music with world music, rock and jazz overtones blending with the often times ethereal pulse that sprang from the Drum & Bass-Dub craze of the day. Soon artists from the jazzier side of the jamband movement started to stop by to play including John Medeski & Billy Martin of Medeski, Martin & Wood, DJ Logic, Marc Ribot, Skerik, David Fiuczynski and Marco Benevento. The music was released in a number of live recordings on the Kufala label capturing some of the shows from The Lizard Lounge as well as in Athens, GA, and New York’s now defunct Tonic club. But the groove began to change a bit with the deep influence of North African music, specifically Moroccan Trance and Gnawa music, that Mike Rivard was touched by during his musical studies and travels with bands he’s been a part of. One of the most important members of the Club d’Elf universe of players is oud master Brahim Fribgane who hails from Casablanca (now try to match that for an exotic place from which to be) and has inspired Mike to continue his journey to the heart of Moroccan music. Brahim turned Mike on to the three-stringed bass instrument the sintir that is now part of Mike’s arsenal of instruments. Blend these exotic instruments with various electronic beat-producing devices and believe me, you will hear some serious swinging once the trance begins. THAT is what I was seeking at Le Poission Rouge on this December night.

The band included Mr. Rivard on acoustic and electric basses as well as the sintir, John Medeski on various keyboards, Brahim Fribgane on oud and percussion, long-time Club members Mister Rourke on turntables and Dean Johnson on drums along with Matt Kilmer on various beat-producing items. This band began the night, as many Club d’Elf shows do, with a groove that starts slowly and builds into a trance with more intensity. The piece went on for probably ¾ of an hour, one loses track of time when in a trance you know, and as things progressed Mike would cue a change with a nod or a wink. I had asked him how influenced he was by the Miles Davis grooves of the late ’60s and early ’70’s and the answer was, yes, very much so. The proof came in this first set of the night. The percussionists kept the groove alive while John Medeski alternated between some of the finest acoustic improvisation I’ve heard him perform and his growling organ and electric keyboard statements. He and Mike Rivard have known one another since the 1990’s when they were both members of the ground-breaking, 11-piece Either/Orchestra led by Russ Gershon. They played like the good friends and long-time associates they are, with ease and confidence. In between them was the electric presence of Brahim Fribgane who took the ancient instrument the oud to a place its creators I’m sure never imagined. With his fluid and frenetic lines blazing in sync with Rivard, Medeski and the percussionists, the trance took on an other worldly nature from time to time. Yes, transcendent might be the appropriate word, but there was always a little funk, some hip hop, lots of jazz and, yes, a unique kind of powerful swing at all times.

For variation Mike Rivard welcomed to the stage a trio that included sintir player and vocalist Hassan Hakmoun, and fellow vocalists and percussionists Said Damir and Chikaao Iwahori. I knew I was getting a taste of the blending of North Africa and America before, but now it was the next course in the meal and I prepared myself for the hottest spice of the night. The combination of the full band with the trio’s offering of voice and sizzling groove produced by some large, metal Moroccan percussion instruments sent the energy level even higher. The band departed to let the trio take the stage alone for three songs, then returned to end the night on their own. Mike Rivard mentioned that they’d thought of playing a second set but wondered if the audience would mind if they just played on in one, long set of music? There were no naysayers inside Le Poisson Rouge and Club d’Elf played another of their legendary 2-hour-plus shows. As Kenny Barron so wisely said…”Every kind of music has its own kind of swing.” The music of Club d’Elf on this night in New York was swinging from the first note to the last in time signatures from another world.

Organ trios and quartets were ubiquitous by the mid-1960s. In African American neighborhood bars and clubs up and down the East Coast, throughout the Rust … END_OF_DOCUMENT_TOKEN_TO_BE_REPLACED

Terence Blanchard looked around the restaurant table and launched into a gentle sermon about jazz education in Detroit that was part homily, part pep talk, … END_OF_DOCUMENT_TOKEN_TO_BE_REPLACED

Creating a program of solo piano music is the ultimate challenge for any improvising pianist. The music on my latest album, Ways of Disappearing (Sunnyside), … END_OF_DOCUMENT_TOKEN_TO_BE_REPLACED

First the good news: As you can see in our annual Festival Guide, there are plenty of jazz festivals scheduled to happen around the world … END_OF_DOCUMENT_TOKEN_TO_BE_REPLACED