Skip to content
Become a member and get exclusive access to articles, live sessions and more!
Start Your Free Trial
Home > Features > Cindy Blackman: At Home 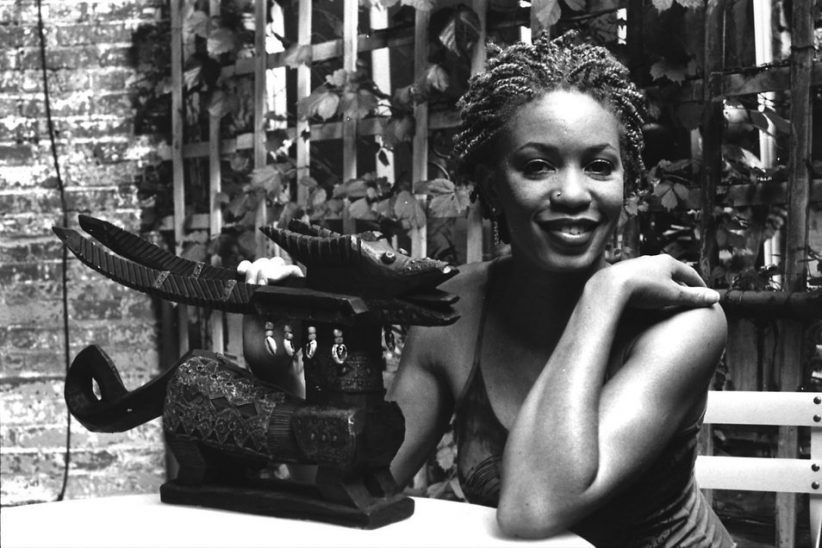 Cindy Blackman is a potpourri of contradictions. Slightly built, carefully coifed and very feminine, she is a powerful, even volcanic, drummer. A city dweller who often longs for the countryside, Blackman loves to rent a small convertible whenever she can for the sheer pleasure of driving. A world traveler, Blackman is also a homebody who loves to cook and is zealous about keeping her home clean. Deeply religious, she is a certified member of the rock world—a place not known for its piety. And her taste in music ranges from Jimi Hendrix and James Brown to Scottish fife and drum corps.

Cindy moved to Brooklyn because it is “just a little more laid back” than Manhattan, where she lived most of her professional life. “It’s a tiny bit of the country, but eventually I need three residencies: a city apartment, a country home and a beach house. I’m working on it.”

Blackman’s loft, in a former warehouse, is bare save for a giant untitled painting, a ’50s drum set—her prized possession—a Rhodes keyboard and a sophisticated audio system. “When I moved in to the loft and told my predecessor that I was a drummer and practiced daily, he told me that wasn’t a problem. He had installed a stage quality stereo system, seven huge speakers, which he played at top capacity. ‘The neighbors never complained; it was cool,’ he said. Well, he lied and I like to live in harmony so I now practice under stereo volume, which, by the way, is great discipline.

“I’m a night owl, so my day starts slowly. I take my [vitamin] concoctions, get out my juicer. I like omelets, so I prepare my breakfast, take a shower, listen to the radio and then get into my music. ”

Blackman was born in Yellow Springs, Ohio, into a musical family. Her dad was a music fan, but her mom was a classical violinist who played with orchestras around the state. “Dad’s mom, in her 90s, still plays the piano,” her uncle played the vibraphone and her older sister sang in the church choir and in local bands. Cindy’s family moved to Connecticut when she was 11 and, after she finished high school, they settled in Boston, where she attended Berklee School of Music.

For the past seven years Cindy has been drummer with rocker Lenny Kravitz and she has traveled the world with his group. “Sometimes the road is hard; there is so little time.”

During her world travels, Blackman fell in love with art. “In Amsterdam, when I had a day off, I went to the Van Gogh museum. It blew my mind. The energy just jumped off the paintings.”

Currently off the road, Blackman says, “Right now I have a little time to relax and I am very happy to be in my own place, in my own country for a while. I can change my hair from time to time, see my friends, experiment with cooking meals and practice and write. On the road I’m always surrounded by people, but I often get lonely. Also, I can’t trust everybody. I am, after all, a woman.”

Last Movie?
Man on the Moon; The Matrix

Last Book?
The Cure for All Cancer by Hulda Regehr Clark, M.D., Ph.D.

Several years ago, one of Danilo Pérez’s students was suffering from tendinitis. Pianist Pérez was then a professor at the New England Conservatory; his student, … END_OF_DOCUMENT_TOKEN_TO_BE_REPLACED

As a JazzTimes writer, I can talk about the powers of a dynamic drummer until I’m blue in the face: the weight of each tom-tom’s … END_OF_DOCUMENT_TOKEN_TO_BE_REPLACED

There are certain works of art with which I wish I could have a conversation, so that I might express my gratitude for them. I … END_OF_DOCUMENT_TOKEN_TO_BE_REPLACED