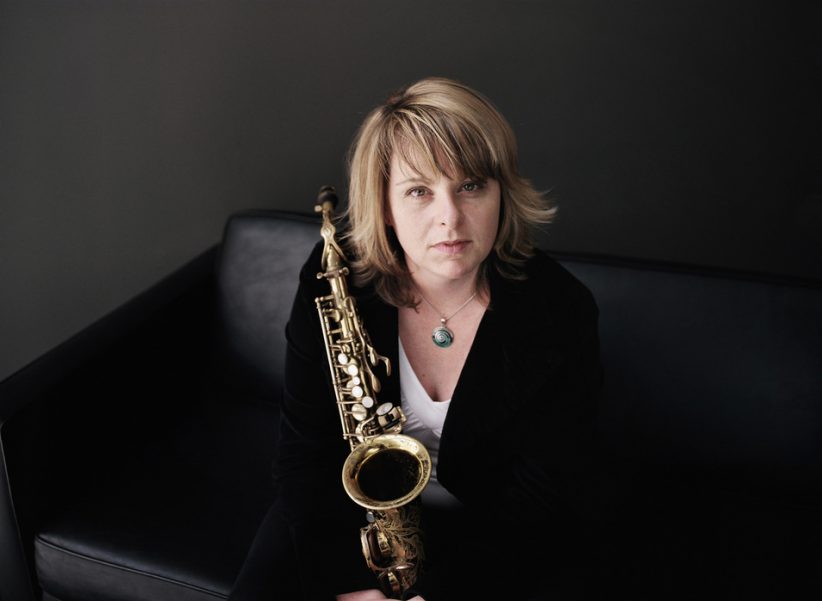 On the list of things I love are jazz music and the great outdoors.

That seems to be two of the things that Montreal’s Christine Jensen is also into. In a recent performance at Salle de Gésu, the Christine Jensen Jazz Orchestra launched its first CD, Treelines. A project Jensen said was more than a few years in the making.

Christine and Ingrid Jensen grew up on the West Coast of Canada. While composing Treelines, Jensen took inspiration from home. The orchestra opened with a song called Arbutus. At this point, I hadn’t seen the track listing and was excited by the name of my favourite tree.

While travelling in BC a few years ago, I kept seeing these beautiful and strange trees, twisting in their own special way, unmistakable for their red and green peeling bark. They were Arbutus trees, which were special to the area. The trees only grow on the south coast of British Columbia, and are the country’s only native broadleafed evergreen.

There is some beautiful footage of the tree on the Treelines promo video.

Like a lot of jazz musicians that I know can geek out about chord progressions, cymbals and drum sticks, I can do the same about trees…

The second song they played was “Red Cedar” and then “Western Yew,” which I think was for Christine’s uncle, a logger who wished his nieces wrote country songs with actual lyrics. I think Christine’s “Western Yew” is a little more enjoyable than say, Willie Nelson’s might be, but that’s just personal preference.

I went into the night unsure of what to expect. To me big band meant music of the ’30s and ’40s. I attended the show with my friend Martine who plays trumpet in the Montreal All-City Big Band and got a bit of a heads up. She explained it would be more like the modern jazz shows I go out to see in the city, but with a lot more instruments.

That was a good way to explain it. There was no Lindy Hopping for me last night.

It was strange for me to see so many guys of such high caliber on the sidelines. I have been out to see more than half the band in their smaller forms, most of them composers and band leaders of their own projects. La creme de la creme as they say.

But that’s what Jensen’s music warrants.

Ingrid Jensen (who Christine introduced as one of the best trumpet players on the Earth right now–and I don’t think that’s sisterly love, just a very realistic observation) was upfront for most of the show, as she is highlighted on most of Treeline‘s eight tracks. When I read that Ingrid was playing “electronics” as well as trumpet I wasn’t quite sure what that meant. But then she did something I had never seen before–recorded and looped some of her notes. She did this a few times, but it had the strongest effect during the opening of “Western Yew.”

Not so out of character, pianist Steve Amirault provided a bit of comic relief (I needn’t mention his serious talent as a musician.)

Joel Miller was also in the forefront, and the band played his composition Dropoff which he introduced to the Jensens via Skype while they were touring in Sweden.

They closed the show with a reggae-ish song called “Dark and Stormy Blues.” Fraser Hollins put down his upright bass and picked up an electric bass guitar and one of the night’s personal highlights was when trombonist Jean Nicholas Trottier took a solo.

To read other blogs by Jenn Hardy, go to her Pork Pie Jazz blog site.

Organ trios and quartets were ubiquitous by the mid-1960s. In African American neighborhood bars and clubs up and down the East Coast, throughout the Rust … END_OF_DOCUMENT_TOKEN_TO_BE_REPLACED

Terence Blanchard looked around the restaurant table and launched into a gentle sermon about jazz education in Detroit that was part homily, part pep talk, … END_OF_DOCUMENT_TOKEN_TO_BE_REPLACED

Creating a program of solo piano music is the ultimate challenge for any improvising pianist. The music on my latest album, Ways of Disappearing (Sunnyside), … END_OF_DOCUMENT_TOKEN_TO_BE_REPLACED

First the good news: As you can see in our annual Festival Guide, there are plenty of jazz festivals scheduled to happen around the world … END_OF_DOCUMENT_TOKEN_TO_BE_REPLACED