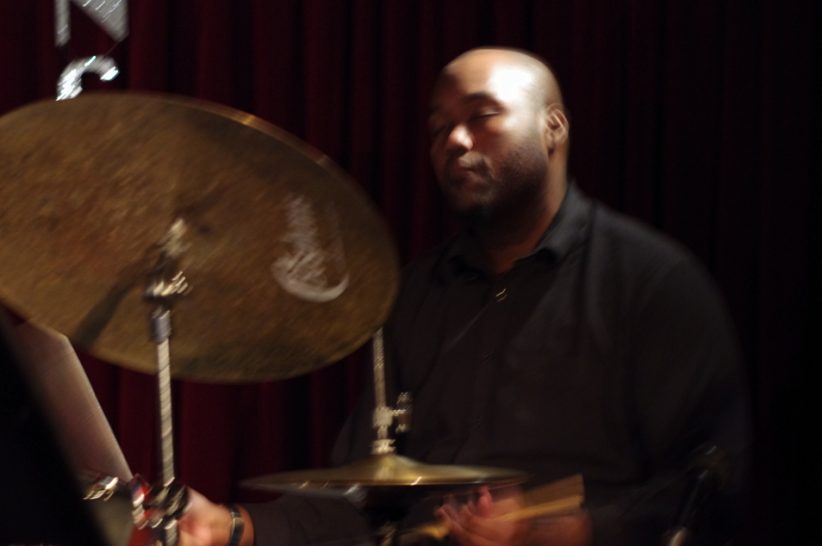 I was clicking through some emails, when I came across a jazz promotion of drummer and composer Chris Massey. His new digital only release, Whosoever; on Power Cosmic Records with his band The New Jazz Project, featuring Adam Larson on tenor/soprano sax, Benny Benack III, trumpet, Willerm Delisfort, piano and Chris Talio on bass, took me for a ride of musical changes, exquisite compositions and thorough arrangements. I contacted him immediately for an interview.

Chris Massey’s music has taken me through these moments of excitement in the past on his Jazz Times and DownBeat reviewed 2010 release, Vibrainium, which I wore a hole through the CD on my radio show. It is no wonder he has this affect since he was mentored by jazz legend, Shedrick Hobbs, who played with legends such as Charlie ‘Bird’ Parker and Dizzy Gillespie. Massey’s other drummer inspirations derive from the technique and approach of notable drummers and composers, Jeff “Tain” Watts and Brian Blade; which can be heard in his performances.

A jazz musician’s legacy can be a multifarious slope. Sometimes it’s defined by contrasting stylistic paths that amalgamate into a career, as with Miles Davis. … END_OF_DOCUMENT_TOKEN_TO_BE_REPLACED

I reached across the northern border to Toronto, Ontario, Canada, for my latest subject of the “In Service of Jazz” series of interviews: Sybil Walker, … END_OF_DOCUMENT_TOKEN_TO_BE_REPLACED

When jazz guitarists step out on their own, leaving the security of accompanists behind, they face special challenges. Yes, they can handle chords and melody … END_OF_DOCUMENT_TOKEN_TO_BE_REPLACED

Those only familiar with Diego Barber’s Sunnyside Records output might be taken aback by his latest release on the label, Drago. Its largely electronic sounds … END_OF_DOCUMENT_TOKEN_TO_BE_REPLACED