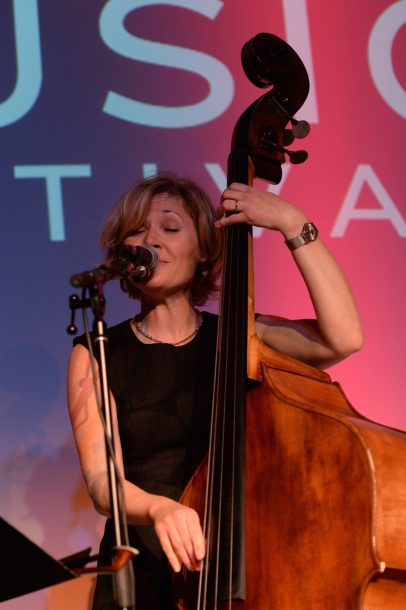 The balance of melody and harmony is vital to the craft of jazz, especially when it comes to improvisation. That balance can become precarious, however, when one musician is responsible for both of those elements. Players of chordal instruments, like piano and guitar, have to grapple with that tension to a great degree. But there’s a specific subset of musicians who have a far greater challenge with it: bass-playing vocalists.

These are technicians who are working simultaneously on two instruments, and with fully developed missions on each. The bass doesn’t merely play the harmony-it anchors it. The vocal doesn’t merely carry the melody-it adds full layers of meaning and nuance to it. And since jazz is often about tension between harmony and melody, the bassist-vocalist’s two missions are sometimes at cross purposes. “There is some truth to Jay Leonhart’s song ‘It’s Impossible to Sing and Play the Bass,'” says Nicki Parrott, an Australian bassist-vocalist, based in New York, who is perhaps best known for her work with the late Les Paul. Her most recent album is Two Songbirds of a Feather, a collaboration with vocalist-guitarist Becky Kilgore. “[Playing bass while singing] is multitasking, and always a challenge. It’s a fun challenge, though, a good challenge.”

But how to meet it? The first and most important strategy, says Parrott, is one of the old saws: Know your material. “The tunes I perform the best, singing and playing, are the ones where I know the lyrics and how I’m going to sing them,” she says. “I have the lyrics memorized; I know the melody backwards. The freer you are with the song, the easier you’re able to accompany yourself on the bass.”

If a seasoned professional musician knows the melody, the most basic harmony generally takes care of itself. Parrott says that once she’s mastered the line and knows what key she’s working in, she can automatically find the song’s roots and accents. But translating that into manual function takes some work. “You have to learn the chords and the melody separately, and then put it together,” she says, remarking that it’s not unlike coordinating the left and right hands on a piano. “Sometimes you really have to work out exactly what the bass is going to do. And you start off playing in a 2 feel, in order to make it easier on yourself. When you’re walking a bassline and trying to sing, it’s difficult, so you have to work up to that.”

But in the jazz world, rote familiarity has diminishing returns. For one thing, the repertoire has to change so it doesn’t get stale, and even the most practiced songs can be uncomfortable if they’re new to a set. In addition, in certain situations audience members make requests, sometimes accompanying them with tips too big to refuse. In those cases, Parrott lives by two principles: simplify the bassline and prioritize the vocal. “I just spent 10 days on a cruise ship, where I was playing every night and doing a lot of songs I don’t ordinarily sing,” she says. “I haven’t got a lot of the lyrics committed to memory yet. So I had to be really simple with my bassline in order to get the melody right-because that’s where people really will criticize.

“This is the American Idol era,” Parrott adds. “Everyone has an opinion about a singer. They’re less discerning when it comes to bass; they almost don’t notice what the bass is doing. So when you sing and play, you’ve got to make sure you get the vocal right, even at the expense of the bassline.”

Then, of course, there’s improvisation-not all of which is in the solos. A bassist who is also singing is generally unlikely to reharmonize a tune on the spot; they have enough on their plate. “Most of my songs have charts,” Parrott says. But on the other hand, “Sometimes you’re playing a tune and the piano player will throw in a different chord. And so you’re trying to grab those but also remember what you have to sing.” Sometimes that results in unwanted, even cringe-worthy dissonances, though that won’t faze a practiced musician. “The more you do this, the more you get back on your feet quickly. The more you snap back and say, ‘Oh, that’s where I am.'”

The key to these techniques, unsurprisingly, is practice. “Like anything else, you get good at what you do a lot,” Parrott says. She still struggles with certain things: laying back on a vocal while keeping the bass in the pocket, for example, or emoting on a ballad without getting distracted by her bass notes. But she continues to work at it, in practice sessions as well as on the bandstand. “That just takes a lot of time doing the same song. Or doing several songs in the same tempo and experimenting with it,” she says. “I don’t think there are really any shortcuts to being comfortable with it.”

Organ trios and quartets were ubiquitous by the mid-1960s. In African American neighborhood bars and clubs up and down the East Coast, throughout the Rust … END_OF_DOCUMENT_TOKEN_TO_BE_REPLACED

Terence Blanchard looked around the restaurant table and launched into a gentle sermon about jazz education in Detroit that was part homily, part pep talk, … END_OF_DOCUMENT_TOKEN_TO_BE_REPLACED

Creating a program of solo piano music is the ultimate challenge for any improvising pianist. The music on my latest album, Ways of Disappearing (Sunnyside), … END_OF_DOCUMENT_TOKEN_TO_BE_REPLACED

First the good news: As you can see in our annual Festival Guide, there are plenty of jazz festivals scheduled to happen around the world … END_OF_DOCUMENT_TOKEN_TO_BE_REPLACED