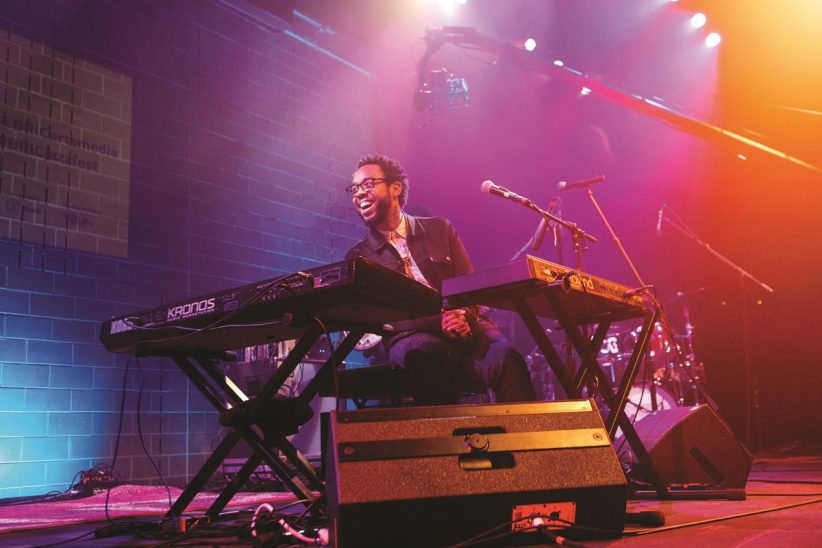 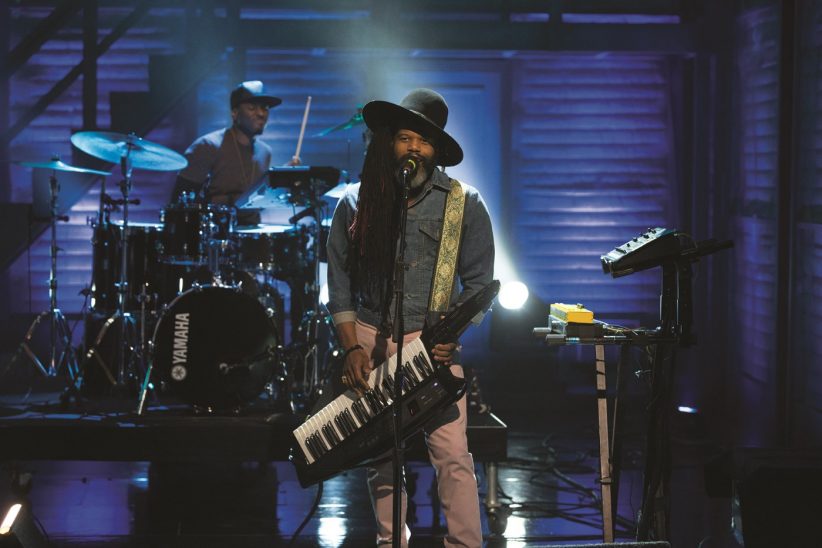 For those unfamiliar with the vocoder, a shorthand description of the instrument could simply be “the robot voice.” That might come off as dismissive to an artist like Casey Benjamin, who has emerged as a modern master of the vocoder through his work with the Robert Glasper Experiment, if not for the fact that this robotic element attracted him to the instrument in the first place. “When I was 7 or 8, I really thought that I was a cyborg,” Benjamin recalls with a laugh. “I was obsessed with RoboCop, and you could not tell me different. So in part I guess it’s a nostalgic childhood thing, but I think it’s beautiful to have a robot being romantic.”

The vocoder seems to be enjoying a renaissance these days, especially at the crossroads between jazz, R&B and hip-hop. Benjamin’s work can be heard not only on the Experiment’s Blue Note releases, including the band’s latest, ArtScience, but also on the new album by A Tribe Called Quest, We Got It From Here… Thank You 4 Your Service. In-demand producer and musician Terrace Martin uses it as a key part of his toolbox, on his own acclaimed recent album, Velvet Portraits, and on projects he’s produced including Kendrick Lamar’s landmark To Pimp a Butterfly.

Long before it entered the music world, the vocoder, short for “voice encoder,” was invented in the late 1930s at Bell Laboratories, as a voice synthesizer to help reduce bandwidth on phone lines. Experimental electronic musicians began to take notice of the technology in the 1950s, and later Bob Moog and Wendy Carlos worked together to develop their own version, which can be heard on the soundtrack to Stanley Kubrick’s A Clockwork Orange. The vocoder’s first heyday occurred during the 1970s and ’80s, when it was used to provide “futuristic” vocals by groups like Kraftwerk, Electric Light Orchestra and the Alan Parsons Project, while Stevie Wonder and Herbie Hancock gave the tool a soulful gloss on albums that blurred the lines between soul and pop and jazz. It also provided actual robot voices on occasion, whether for Styx’s “Mr. Roboto” or the Cylons on the original Battlestar Galactica.

Benjamin and Martin—both saxophonists also adept on keys—got started on a path toward the vocoder by hearing a different instrument: the talkbox, an effects pedal that channels the sound of an instrument into the mouth, creating a fusion of voice and most often keyboard or guitar. Roger Troutman, lead singer of the R&B group Zapp, used the talkbox on numerous songs, including the 2Pac hit “California Love.” (These days, both could be confused with Auto-Tune, the pitch-correction software that works by manipulating the sound of the voice itself, but can achieve similarly “cyborg” effects when pushed to extremes—think Kanye West or the once-ubiquitous T-Pain.) Benjamin and Martin were captivated by Troutman’s voice, but both say their lives were changed by hearing Hancock’s use of the vocoder on late-’70s albums like Sunlight and Feets, Don’t Fail Me Now. Martin also credits Teddy Riley, a master of the vocoder and the talkbox, and the producer of a who’s who of hip-hop and R&B including Michael Jackson, Usher and Bobby Brown.

Unlike Benjamin’s android dreams, Martin was satisfying more human desires by picking up the vocoder. “I wish I could sing,” he says. “The vocoder lets me play my voice. There are masters out there, like Al Jarreau or Kim Burrell, who can do intricate things with their voices. Sometimes people need different vessels to get those things out, and the vocoder is just one of those things.”

Vocoders require a vocal signal, either spoken or sung, and an instrument or synthesizer that will turn those words into musical pitches. (Benjamin uses a keytar as his vessel; Martin opts for a conventional keyboard.) For those looking to develop their technique, Benjamin suggests thinking vocal-first. “Like Auto-Tune, the vocoder sort of corrects your pitch, but if you don’t sing with the right inflection or the right phrasing it’s going to come off extremely robotic and very unnatural,” he explains. “That’s why it doesn’t sound right when a lot of keyboard players try to play vocoder—because they’re thinking of it as a keyboard player and not as a vocalist. I’m a big fan of Ronald Isley, Marvin Gaye and Gladys Knight. They don’t do a lot of riffing or a lot of technical things, they just sing the melody and their phrasing is so amazing. I advise people to get some formal or basic training in singing.”

A major challenge of singing through the vocoder can be making your lyrics understandable. Hancock’s vocals were uniquely legible thanks to the Sennheiser equipment he was using, but that model was prohibitively expensive. Benjamin tweaked his set-up for years to improve the clarity of his words, though he says that learning to be expressive on your instrument is equally important. “We still have many people coming to our shows who say they can’t understand a damn thing I’m saying,” he says. “But they get the feeling from it. They understand the inflection. That’s the way I win them over—with the expression rather than a whole bunch of notes or shredding out.”

With popular artists like Daft Punk, Chromeo and even Coldplay recording with it in recent years, the vocoder, once relegated to gimmick or special-effect status, is growing in popularity, and Benjamin and Martin encourage its use in a wide variety of settings. “The right place for vocoder is wherever you park your car, take it out and plug it in,” Martin says. “One day I took the vocoder to church because I forgot my saxophone—don’t ask me how; it was a crazy night. I sometimes take the vocoder to a jazz jam session where they’re playing standards, or to a blues session. The vocoder can go anywhere you want to go. That’s the freedom of jazz.”

“Don’t be afraid to try anything,” Benjamin concludes. “That one thing that you think is too quirky or too weird could end up being trendsetting.”

Organ trios and quartets were ubiquitous by the mid-1960s. In African American neighborhood bars and clubs up and down the East Coast, throughout the Rust … END_OF_DOCUMENT_TOKEN_TO_BE_REPLACED

Terence Blanchard looked around the restaurant table and launched into a gentle sermon about jazz education in Detroit that was part homily, part pep talk, … END_OF_DOCUMENT_TOKEN_TO_BE_REPLACED

Creating a program of solo piano music is the ultimate challenge for any improvising pianist. The music on my latest album, Ways of Disappearing (Sunnyside), … END_OF_DOCUMENT_TOKEN_TO_BE_REPLACED

First the good news: As you can see in our annual Festival Guide, there are plenty of jazz festivals scheduled to happen around the world … END_OF_DOCUMENT_TOKEN_TO_BE_REPLACED