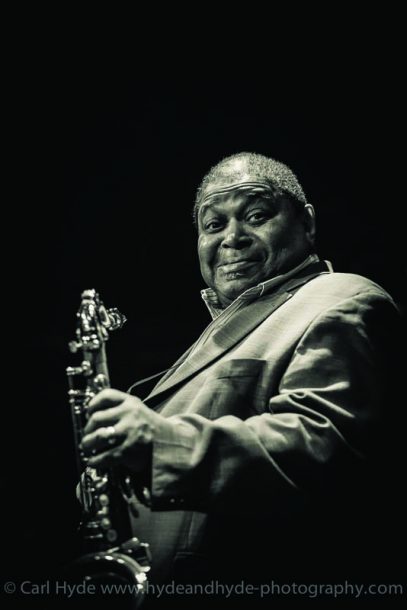 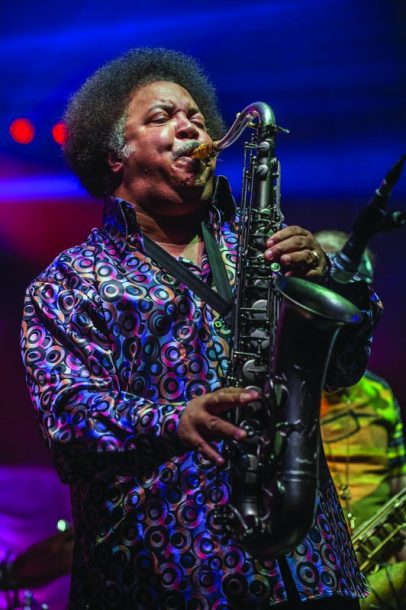 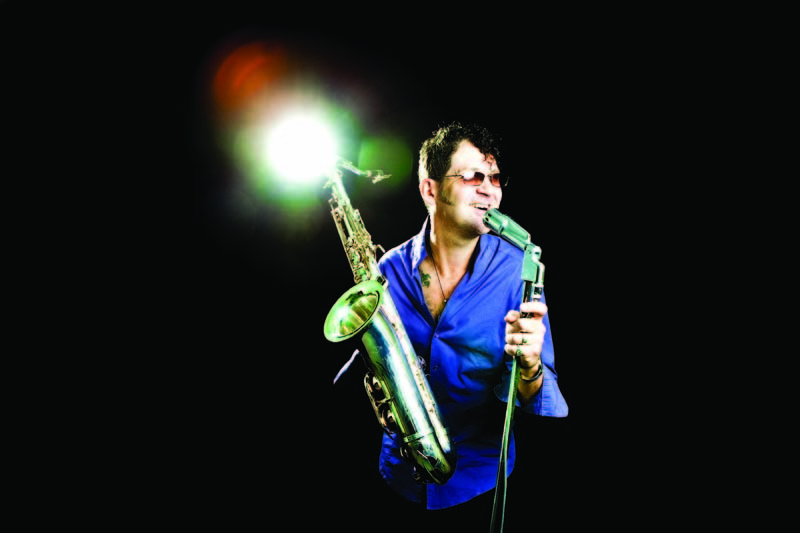 “I used to hear jazz players say, ‘I like James Brown, but anyone can play that simple stuff,'” recalls Ron Holloway, 61, the tenor saxophonist in Dizzy Gillespie’s final quintet. “I would laugh. I would say to myself, ‘Yeah, you can play all the notes, but you won’t have the sound, and they will laugh you off the stage.’

“I’ve seen it happen. I’ve seen really skilled jazz players get up onstage with a blues band on a cruise ship and play all these 16th notes and substitute chords that had nothing to do with what the band was doing. And I’ve seen the band’s guitarist get all squinty-eyed and ask the guy to leave. He didn’t ask me to leave, because I know how to use tone to say something with quarter and half notes.”

Now that college jazz programs are churning out young virtuosos who can play blazing solos in any key at any tempo, you would think that technical ability in jazz has never been higher. And you might be right. But a certain set of techniques has been neglected, leaving these newly credentialed jazz saxophonists with a big hole in their skill set.

Can they honk or pop their horn? Can they shout or scream through their reed? Can they hold a note until it fills up with lust and longing as it might in a blues singer’s throat? Often the answer is no, because no one bothered to teach them these techniques-maybe because the instructor didn’t really know them either. “When people study saxophone, I hate that they’re automatically steered into bop and postbop,” adds Delmark recording artist Sax Gordon (a.k.a. Gordon Beadle). “If you want to play like Lee Allen or Hank Crawford that’s not even an option, maybe because the teacher doesn’t know how to play like that.

“When I started playing with the blues guys after playing jazz, I thought I had all the chops I needed, but I soon learned just how much I needed to learn, because every blues style has its own techniques. Even within Chicago blues there are important differences. So when I teach, I try to get [my students] to do something simple that will connect with people. I dare them to work with three or four notes and see how much you can vary them. It’s amazing what you can do.”

Pee Wee Ellis played sax in James Brown’s band for four of the singer’s peak years, 1965-1969. He had played in a high school jazz band with Ron Carter and Chuck Mangione and had taken lessons from Sonny Rollins, and when he got the job with Brown, Ellis did it at first for the money. But he soon grew to recognize the complexity and power of Brown’s music. And the singer soon tapped into Ellis’ jazz-honed chops as a composer, arranger and bandleader. “He called me to the dressing room one night after a gig,” Ellis remembers, “and said he had an idea. He sang this rhythm to me: ‘Huh, nuh, huh, huh.’ I took that on the bus and started writing, and that beat became the bassline to ‘Cold Sweat.’ After I wrote out the basic chords, I added a minor on the top of the chord. I got that from Miles’ ‘So What.’ Another time he came to me with the lyrics for ‘Say It Loud-I’m Black and I’m Proud,’ and I just ran with it. I came up with that bassline, and that horn line was a little teedle-dee-dee, and he came up with the answer to the horns: ‘bomp-de-bomp.’ He was very big on punctuations. He called them ‘hits.’

“This was the punctuation that allowed the music to make sense. This is as important in music as it is in writing a paragraph. You need the commas and periods; otherwise it’s just a stream of consciousness. You need to break that up into sentences. You have to take a chance and use your instincts as to where to put the punctuation.”

“When you’re cursing someone out,” Holloway adds, “you’re not rambling on or showing off your college vocabulary. You’re being blunt and using short sentences with pauses for the message to sink in. It’s the same in music. To play that kind of blues and R&B phrasing, that more percussive approach, you have to be thinking in those terms. If you’re thinking in terms of long phrases of [8th and] 16th notes, you can’t do it. If you’re thinking of fewer notes and a bigger sound, you can. One thing that’s involved is tonguing. To try to convey the same emotion as the vocalist, blues players are using their tongue at the very beginning of the note to create that slapping effect.”

Honking-the loud, exclamatory attack on a repeated low note-is another percussive technique. Screaming or squealing on a high note or shouting through the horn are ways to create a climax, and players should try to use dynamic shifts in volume to create drama and tell a story. All of these ideas on the saxophone are derived from the vocal effects used by blues and R&B singers. It’s not that these musical tools are more important than advanced harmonic concepts and speed, but that they’re equally important.

Just as essential as technique is attitude. You can’t play convincing blues or funk phrases on the saxophone if you don’t enjoy and respect blues and funk. You can’t learn how to do it right if you don’t listen to a lot of it. Sax Gordon, a Boston-based saxophonist who was born in Detroit in 1965, has spent most of his career playing in blues bands led by himself, Duke Robillard, Charles Brown and others. But he has always listened to straight-ahead jazz too, which has given his blues solos a surprising inventiveness.

On his new album, In the Wee Small Hours (Delmark), he turns the tables and lends a strong blues feeling to jazz standards made famous by Ben Webster, Ike Quebec and Illinois Jacquet. Leading an organ trio featuring Italy’s Alberto Marsico, Gordon demonstrates the advantages of studying both sides of the blues/jazz boundary-especially in the sweet spot where musicians such as Jacquet and David “Fathead” Newman resided. “I can’t teach you how to play like Joe Houston or Ike Quebec,” Gordon says over the phone from a tour in Italy, “if you haven’t heard the music. There are like 40 Gene Ammons albums, and each one has liner notes by a local DJ who describes how Ammons played in their town. That’s what you have to do: track down those albums and read the notes as you listen.”

Ellis seconds that thought. After he left Brown in 1969, the saxophonist alternated jazz and R&B gigs, leading the JB Horns, an all-star group of Brown alumni, and acting as music director for Van Morrison while also collaborating with the likes of Dave Liebman. Today, at age 74, he remains active. He released Tenoration: From Jazz to Funk and Back in 2011, where he played standards by Sonny Rollins, Eddie Harris and Nat Adderley next to originals written with and without Brown. He’s currently touring and recording with Ginger Baker’s African-inflected quartet Jazz Confusion and working with collaborators such as Sheila E. and Chuck D on an album that will trace the history of funk. “Jazz doesn’t emphasize the basic pulse as much as funk does,” Ellis says from his current home in the U.K., “but when you combine the two it gives you an advantage. My funk training put me more in touch with the pulse. I played hard with James, so it built up my music muscles and gave me a certain level of confidence for expressing myself. My jazz training gave me more variety of things to play; it expanded my vocabulary. You can incorporate a range of tonalities that wouldn’t ordinarily be expected, which gives the funk some color and some interest.”

Holloway keeps busy these days performing and guesting with Gov’t Mule, the Warren Haynes Band and the Tedeschi Trucks Band, and a couple years back he launched his own jazz-funk outfit, the Ron Holloway Band. But he’s still remembered for the four straight-ahead jazz albums he made for the Milestone label in the ’90s. And he’s one of the few tenor saxophonists that Sonny Rollins has invited onstage to sit in. “If I were teaching a university class on saxophone,” Holloway says from Austin, where he’s working on a movie project, “my class would cover the whole history of the instrument and all the ways it can be played: everything the saxophone is capable of doing. People try to separate these various ways of playing the instrument, but I’ve incorporated elements of blues playing in my jazz solos and elements of jazz playing in my blues solos.”

“You can’t be a snob who says, ‘I should only be playing 16th-note runs,'” argues Holloway. “If you look down on more basic players, you can’t play like them. You have to have an open mind. You can’t think that the only music worth playing is music that’s harmonically sophisticated. Charlie Parker is a genius, but he never looked down on blues and country music.”

As often happens in all areas of culture, the boldest breakthroughs into modernity often come through the back door of older, neglected forms. It might be Woody Allen filming in black-and-white, Jackson Pollock flinging paint like a child, the Bread and Puppet Theater donning papier-mâché heads or Ornette Coleman’s group pursuing simultaneous solos like a Dixieland band. “The irony of John Coltrane’s Impulse! years,” Holloway continues, “is he started to use techniques that were more representative of R&B players, like that screaming in the upper register and honking in the lower register. Not many jazz players were doing that, but R&B players did it all the time. It wasn’t that he was trying to be more R&B; it was that he was trying to utilize all the sounds he’d ever used.

“It was like he was saying, ‘OK, folks, it’s nice to be accepted, but I’ve got some other things I want to explore on the instrument. I’ve got other questions I want to answer: Why can’t I scream on a jazz number? Why can’t I honk on a jazz number?’ He didn’t accept that a jazz player had to limit himself to certain sounds. He freed it up and soon you heard a lot of jazz players using those techniques, splitting notes and honking. It was considered avant-garde but it came out of those R&B bars.” Originally Published June 14, 2015

In spring 1963, when Coleman Hawkins was 58 and making some of the most astonishing music of his career, he gave a short but revealing … END_OF_DOCUMENT_TOKEN_TO_BE_REPLACED

Forgive me if I’ve mentioned this before (perhaps repeatedly), but I’ve been playing guitar now for more than 40 years. So when the time comes … END_OF_DOCUMENT_TOKEN_TO_BE_REPLACED

Organ trios and quartets were ubiquitous by the mid-1960s. In African American neighborhood bars and clubs up and down the East Coast, throughout the Rust … END_OF_DOCUMENT_TOKEN_TO_BE_REPLACED

Terence Blanchard looked around the restaurant table and launched into a gentle sermon about jazz education in Detroit that was part homily, part pep talk, … END_OF_DOCUMENT_TOKEN_TO_BE_REPLACED