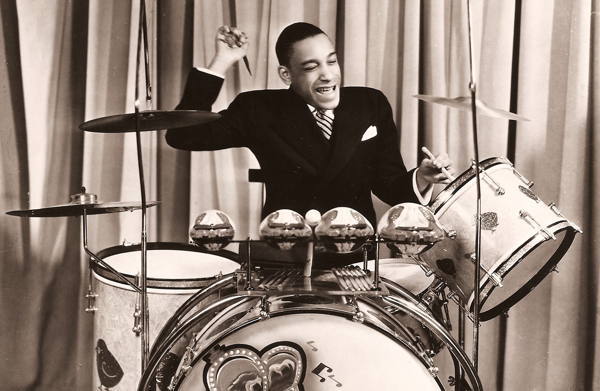 Chick Webb’s early death has tended to obscure the status he enjoyed among his peers during his lifetime. Best known for discovering Ella Fitzgerald, who recorded about 50 sides with Webb’s orchestra, including “A-Tisket, A-Tasket,” it was actually Webb’s drumming and the precision swing of his orchestra that made him a household name during the Swing Era. Art Blakey, Louis Bellson, Buddy Rich and other drummers who emerged in the early’40s spoke of him with reverence; Stan Levey, who played with Dizzy Gillespie and Charlie Parker in 1945, called him “my first hero.” Gary Giddins celebrated him as “an absolutely brilliant drummer,” and in the documentary series, Ken Burns Jazz, Giddins exclaims over the force with which Webb’s foot pedal work required nailing his drum kit to the stage of the Savoy Ballroom.

Webb’s accomplishments were made all the more remarkable by the spinal tuberculosis that caused him to develop a hunchback, plagued him with pain and fatigue and led to his premature death in 1939 at the age of 34. (Webb’s birthdate was never firmly established, but most sources cite February 10, 1905.) Webb’s diminutive size only added to his larger than life stature among musicians and the thousands of jitterbuggers who packed the dance floor of the Savoy to hear him throughout the ’30s. While Webb’s recorded legacy is muddied by the aural quality of the recordings he made for Decca, and his band lacked for household-name soloists, he remains a compelling historical figure largely because of his association with the Savoy.

Located at the corner of 140th Street and Lenox Avenue in Harlem, the Savoy Ballroom was ground zero for Lindy Hoppers of all races at a time when most New York venues still clung to Jim Crow customs, and the Cotton Club, where Duke Ellington presided, was off-limits to anyone but the rich and famous. The Savoy catered to the African American working class, but as Norma Miller recounts in Ken Burns Jazz, “The first place in the world that black and white walked through the door together [was the] Savoy. They were joined by a simple thing called Swing.” In the Chick Webb documentary The Savoy King, Miller says, “We fought a war with music and dance and that opened doors.”

Webb’s brilliant drumming was fired by a competitive zeal that served him well in the many battles of the bands he engaged in at the Savoy. Unfazed by any challenger, Webb’s orchestra locked horns with Basie, Goodman, Lunceford, Ellington and many others. As Louis Armstrong improvised in a lively duet with Ella Fitzgerald on “Stompin’ at the Savoy,” “Chick Webb cut ’em all.” In his autobiography Good Morning Blues, Basie credits an encounter with Webb for opening up new doors for his outfit. The two bands squared off on January 16, 1938, the same night that Benny Goodman presented his historic Carnegie Hall concert. Before the Count and several other Basie-ites went downtown to join BG, they did battle with Webb.

“The Savoy was a big sellout that night because of all the buildup, and the gig itself brought us a lot of favorable publicity, because when it was over, it was written up just as though my band had been battling Chick for the championship,” wrote Basie. “That made people more curious about us than ever before. It helped us get bigger and better bookings, and didn’t hurt our record sales, either.” As for Webb, Basie recalled, “The Savoy was really [his] turf…and the Little Giant took charge there. And I mean he really took charge…If you never got a chance to hear that band live, you really missed something.”

It was Webb’s face-off with Goodman several months earlier that made history. Billed as “The Musical Battle of the Century,” it was witnessed by an SRO crowd of 4,000 who packed the Savoy while another 5,000 thronged the sidewalks outside. BG was already being promoted as the King of Swing, but for blacks especially, Webb was the uncrowned king. And on the occasion of May 11, 1937, the verdict was in his favor. As Gene Krupa said of his drumming counterpart, “Chick Webb had cut me to ribbons.”

The battle is recounted in an episode of Ken Burns Jazz, where there’s a neat back and forth sequence between the Webb and Goodman bands playing “Don’t Be That Way.”

It was the story of the Webb-Goodman contest that intrigued filmmaker Jeff Kaufman. “It was said that Webb’s band ‘wiped the floor’ with Goodman. Mind you, his was then the most famous band in the land. I said, ‘Wow,’ there seemed to be so little information out there. I just had to find out more.” The result is the documentary Chick Webb: The Savoy King, which premiered at the New York Film Festival in 2011.

In spring 1963, when Coleman Hawkins was 58 and making some of the most astonishing music of his career, he gave a short but revealing … END_OF_DOCUMENT_TOKEN_TO_BE_REPLACED

Forgive me if I’ve mentioned this before (perhaps repeatedly), but I’ve been playing guitar now for more than 40 years. So when the time comes … END_OF_DOCUMENT_TOKEN_TO_BE_REPLACED

Organ trios and quartets were ubiquitous by the mid-1960s. In African American neighborhood bars and clubs up and down the East Coast, throughout the Rust … END_OF_DOCUMENT_TOKEN_TO_BE_REPLACED

Terence Blanchard looked around the restaurant table and launched into a gentle sermon about jazz education in Detroit that was part homily, part pep talk, … END_OF_DOCUMENT_TOKEN_TO_BE_REPLACED