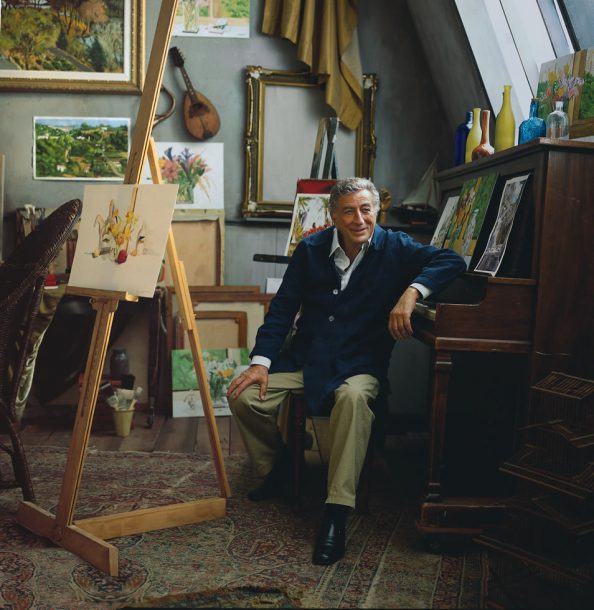 I suppose you’ve noticed that this issue’s cover looks very much like a holiday card. Like many people, I find that as each year goes by, the holidays seem to contain more crass than Christ, but I have learned to embrace certain aspects of the commercial ritual. For example, I’ve become an expert on Christmas music projects, having a collection of nearly a thousand Xmas albums. Last year, I started a tradition of making a mix CD of some of my favorite holiday music and sending it out to friends and family, instead of a corny card or one of those obnoxious newsletters filled with barely concealed gloating. Among the artists on last year’s CD were John Scofield, NRBQ, James Brown and The Three Stooges. Connecting those dots sure was a lot of fun and helped to re-introduce the glee that I used to associate with the holiday season back when I was a kid. That visceral connection to the past is one of the holiday’s underrated pleasures.

Our cover artist knows all about Christmas and its connection to the past. I always feel like a big shot because I get a Christmas card from Mr. Tony Bennett, the vocal as well as visual artist. It turns out that I’m not so special. This is the 15th year that he has provided a painting to be used by the American Cancer Society for a holiday card that’s used as a fundraiser. Apparently, of the 25 or so cards they market, the card with Bennett’s artwork is perennially the top seller. Bennett says that his paintings for the cards do in fact come from the holiday season, albeit the year before. “My wife’s mother and father live in this tiny little town-there’s maybe 89 people in the town-called Clio in the Sierra Mountains. Every Christmas we go there and visit her folks and it’s beautiful. It definitely snows and it’s so scenic, it’s unbelievable, with thousands of pine trees and all that. So I paint there all week.”

Sounds like the movie It’s a Wonderful Life. He laughs, “It is, it is.” It seems that the painting is often a landscape but not necessarily. “You never know. This year I did the Bloomingdale’s shopping bag because they’re promoting my new album with the Basie band-A Swinging Christmas. The bag shows the store with the different international flags and there’s a yellow cab going through the snowstorm and Santa Claus is waving at everybody and I have my little Maltese dog in the front with the cabdriver.” Cute trumps pastoral.

I asked Bennett whom he was excited to get a card from, but he had a hard time being specific. I do think his list is just a bit more glittery than mine, as he cited Carol Burnett, who he says always sends a special note or card. Perhaps Ms. Burnett lost my address along the way. For Bennett the Christmas season is about more than cards and notes. “I love the holiday season. Everybody reminds one another that we’re thinking of you and you’re thinking of them. In fact, some of the best Christmas songs say `Why can’t it be like this all year round?'” And Bennett, naturally, relishes the connection with the past. “What I’ve learned, as a student of life, is that when you go back, you learn more than you do going forward. Everybody thinks you have to do something contemporary. Instead, when you go back to Louis Armstrong or to Rembrandt, you learn more from the masters than you do from whatever’s going on now.” I use the same logic for my holiday CD. I hope Ms. Burnett digs it.

Steve Lacy was once a brilliant bebop player. Yet conventional wisdom says the opposite. Many have long argued that a key to the innovative soprano … END_OF_DOCUMENT_TOKEN_TO_BE_REPLACED

What is a jazz film? Does it have to be a film about jazz and the people who play it? Or can it also be … END_OF_DOCUMENT_TOKEN_TO_BE_REPLACED

Films that tell stories about jazz open a revealing window on the place and perception of the music within popular culture. See Kevin Whitehead’s compelling … END_OF_DOCUMENT_TOKEN_TO_BE_REPLACED

Sponsored When he titled his 1959 album The Shape of Jazz to Come, Ornette Coleman probably didn’t expect that shape to be a familiar one. … END_OF_DOCUMENT_TOKEN_TO_BE_REPLACED