Skip to content
Become a member and get exclusive access to articles, live sessions and more!
Start Your Free Trial
Home > Features > Center City Jazz Festival: Kicking in the Money 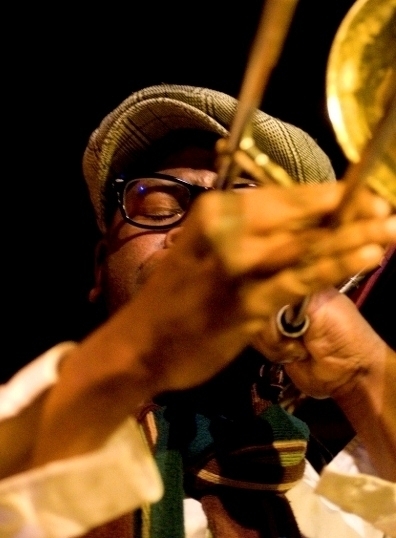 When trombonist Ernest Stuart created his Kickstarter campaign to jump start a Center City Jazz Festival in Philadelphia, not too many folks really (and I mean really) thought he’d make the amount he needed. Yeah right, he’s gonna get fans to fork over $16,500. Philadelphia fans that bellyache over a $20 cover? Are you kidding? Dubious Facebook people watched cynically, but hopeful, day by day as the pledges inched up, stalled, inched up again, leveled off, and then exploded to ultimately reach $17, 296.

One had to wonder. Was this a new kind of pay-to-play scheme that was just shifting the onus from the bands to the fans and once again leaving venues alone to reap the benefits of free music?

I called Stuart while he was on tour on the West Coast with the bhangra funk band Red Baraat to find out how he did it.

“Originally, I wanted to get corporate sponsorship, but no one wanted to pull out their wallets,” he said, so he went to the city and wrangled a meeting with Gary Steuer of the Office of Arts, Culture, and the Creative Economy. But the meeting didn’t go well because, he admits, “I was a little unprepared.” So when his friend Gabriel Mandujano, a young entrepreneur who founded the eco-friendly company Wash Cycle Laundry (and is a salsa player on the side), and another friend urged him to do a Kickstarter campaign – he did, but “they had to drag me into it kicking and screaming,” laughed Stuart.

Ernest Stuart grew up in South Jersey and graduated from Temple University, and while still a student he was a favorite of many of Philadelphia’s finest bandleaders: Orrin Evans, John Swana, and Tim Warfield. Come diploma time, Stuart left for New York and immediately settled in playing with Reggie Workman, Charles Tolliver and the Village Vanguard Orchestra. But Philly always calls to its musical children.

“Philadelphia is where my heart is,” he explained. “I moved back from New York with the intention of doing more with the scene. I wanted to lead by example about where the music should be headed. More original compositions, rather than just standards.”

But Kickstarter? Aren’t these clubs getting one sweet deal?

Unfazed by the questions, Stuart told me his main focus was “getting to next year’s festival” by using the Center City Jazz Festival as a way to attract corporate funding. “I want to make this thing grow,” and “I hope that these venues reconsider some of their booking habits.”

Perplexed, I called the latest clubowner-bashing, back-sassing musician in America – Dave Goldberg – who wrote a scathing letter; to LA club owners that went viral in the music community. I asked him about Ernest Stuart’s experiment.

“It’s unusual, I’ve never heard of using Kickstarter that way,” he said. “I think it’s a noble idea what he’s doing. He’s really doing the venues a pretty big favor, but I don’t think it’s a bad idea… I’d ask how it’s going to work past this one date.” Goldberg paused a moment and then said, “at least the fans can assume the bands are being well paid. I think people are willing to pay if it goes directly to the band.”

And according to Stuart, most of the money from his crowdfunding experiment will be going to the musicians.”They’ll be making more than they would usually get at these venues,” laughed Stuart.

So, is this a pay-to-play situation? Maybe. But it all depends on one’s perspective. Typical pay-to-play schemes involve owners telling musicians to sell 80 tickets if they want a gig or promoters promising eager players dubious music industry exposure for a fee to play a showcase. What Ernest Stuart has done is remove the exploitation from the marketing and money cycle by making it an exchange solely between the musicians and fans – he’s frontloaded the ticket selling process via the pledges made to Kickstarter to produce a festival that will allow these pledge-makers to discover the young artists Stuart has booked. This intrepid trombonist has curated a festival while circulating the money into the hands of the musicians playing it. Nice idea.

Now the next question is – what are these lucky venues going to do to say thank you for all this publicity and all this free music? I tried to call some of them to get an answer. Nobody called me back.

Organ trios and quartets were ubiquitous by the mid-1960s. In African American neighborhood bars and clubs up and down the East Coast, throughout the Rust … END_OF_DOCUMENT_TOKEN_TO_BE_REPLACED

Terence Blanchard looked around the restaurant table and launched into a gentle sermon about jazz education in Detroit that was part homily, part pep talk, … END_OF_DOCUMENT_TOKEN_TO_BE_REPLACED

Creating a program of solo piano music is the ultimate challenge for any improvising pianist. The music on my latest album, Ways of Disappearing (Sunnyside), … END_OF_DOCUMENT_TOKEN_TO_BE_REPLACED

First the good news: As you can see in our annual Festival Guide, there are plenty of jazz festivals scheduled to happen around the world … END_OF_DOCUMENT_TOKEN_TO_BE_REPLACED