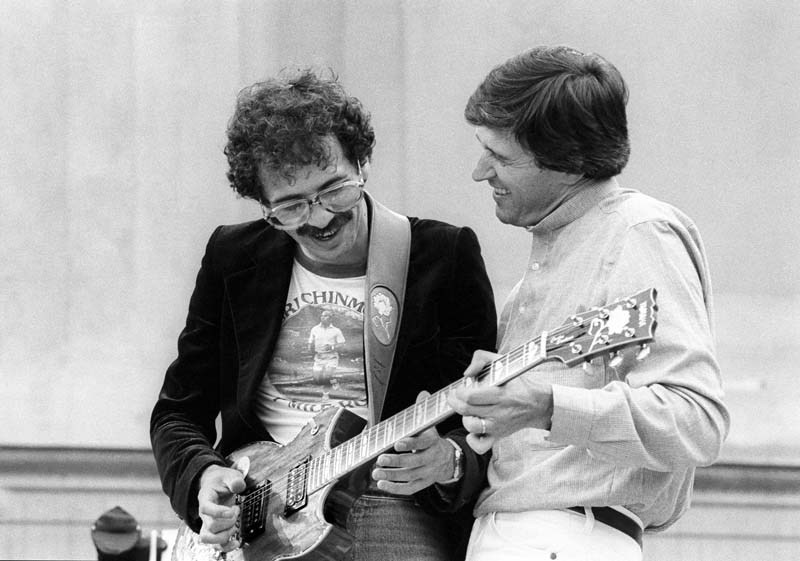 Carlos Santana (l.) and John McLaughlin at the Berkeley Jazz Festival, May 1980 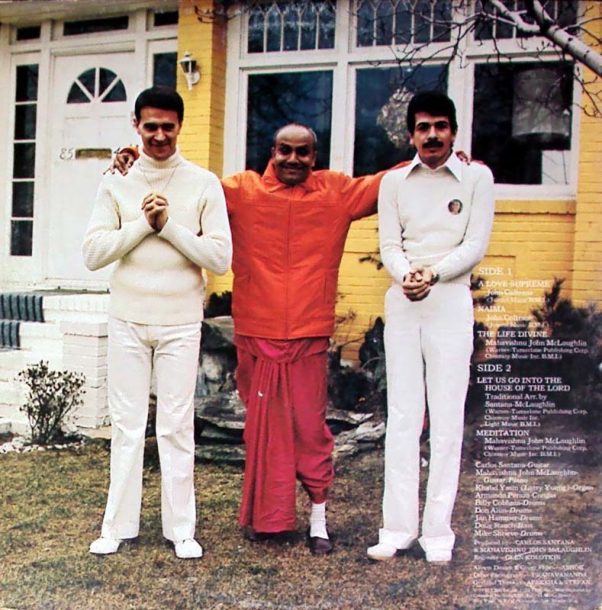 Back cover of the "Love Devotion Surrender" album: l. to r. are John McLaughlin, Sri Chinmoy and Carlos Santana

More than 80 discussions in a half-dozen countries took place with Carlos Santana in assembling his autobiography. His words, stories and personal philosophy revealed a man of continuous self-reflection and intense passions-one of the latter being jazz.

Through the almost two-year process, Santana cycled back to the topic of jazz often: his initial bias against it, seeing it as dinner-club entertainment that “didn’t have fangs and teeth and claws. I wanted stuff that scratched you.” He recalled his first forays: being turned on to Chico Hamilton and Gabor Szabo LPs; catching Charles Lloyd at the Fillmore Auditorium. He repeatedly credited drummer Michael Shrieve for getting him “to listen to Miles and Trane, [and for correcting] my twisted perception that jazz is only for old, fuddy-duddy people.” He talked about his enduring relationships with Miles Davis, Wayne Shorter and other jazz headliners, and about the profound influence these musicians have had on him throughout his life.

When it came to jazz guitar, Santana was expansive in his taste-“I think Charlie Christian should be required listening if you’re a serious guitar player,” he said, and he spoke fondly of “the octaves and warmth of Wes and the atomic, bombastic sounds of Sonny Sharrock.” He was also brutally honest about his own limitations as a jazz player: “I know what I can and can’t do and what I’m best at, and I still don’t know how to play solos around chord changes. … When someone like Charlie Christian or Charlie Parker starts doing chord changes, I can play along and hang for the first 20 seconds, maybe 30. … Thank God Miles and Coltrane moved on to modal playing; it made it easier for me-it’s closer to the blues.”

In this special guitar-issue excerpt, Santana discusses his most celebrated jazz partnership, his friendship and recordings with John McLaughlin.

In the summer of 1970 I met two heroes in New York, both of whom connected with Miles-Tony Williams and John McLaughlin. Tony played drums with Miles through most of the changes of the 1960s and on an album I loved, In a Silent Way. He was leading his own group, Tony Williams Lifetime, with McLaughlin on guitar and Larry Young on organ. It was like all roads led to Miles-Larry and John had also played with Miles on Bitches Brew. Lifetime was playing Slugs’, a small, run-down club on the Lower East Side. This place was like something in a war zone; it was the club where the trumpet player Lee Morgan would get shot in 1972, and they’d close it down for good. I was walking across Avenue A or B, and some guys were sizing me up, like, “What’s this hippie freak up to down here?” John told me he went through the same thing-“Where are you goin’, white boy?”

“Tony Williams? Man, we’ll walk you there. You can’t walk alone here. They’re going to take your guitar.” John’s story gave me the same feeling I had when the bus driver in San Francisco had me sit with him that time I was carrying my guitar. We all have our angels.

Man, the Lifetime show was loud and mind-boggling. It fried my brain. I had never heard rock and jazz ideas put together with so much intensity and with the volume turned up all the way like that. Slugs’ was a small, narrow place, and Lifetime filled it with a vortex of sound. Cream sort of had that energy, but not with the same ideas or sounds-it didn’t surprise me so much that Cream’s Jack Bruce joined Lifetime a little while later.

The three of them had an attitude that made them look like enforcers. You almost didn’t want to look at them they were so … menacing. John was killin’ brilliant in his playing, and I know that just as he scared me, I’m sure he scared even Jimi Hendrix. It was like, “Holy shit, he’s got the Buddy Guy thing down and he can take care of the Charlie Parker thing.” There are just not that many musicians who can play fast and deep the way he does. Even today I love to jam with him, then just step back and listen to him soar.

I met John when they took a break, and he recognized me right away. “Santana? Nice to meet you.” Around a month before, I had gotten into Wayne Shorter’s album Super Nova, which had Sonny Sharrock and John on some tracks, so that was the first thing I told him. “I also love what you do on Joe Farrell’s ‘Follow Your Heart’ with Jack DeJohnette.” [Ed. note: That composition, included on the 1970 LP Joe Farrell Quartet, was written by McLaughlin.] I think I surprised him a little with what I was listening to, and then he told me what he was into: Coltrane, Wayne, Miles and Bill Evans-in that order. That’s all we needed to talk about.

Organ trios and quartets were ubiquitous by the mid-1960s. In African American neighborhood bars and clubs up and down the East Coast, throughout the Rust … END_OF_DOCUMENT_TOKEN_TO_BE_REPLACED

Terence Blanchard looked around the restaurant table and launched into a gentle sermon about jazz education in Detroit that was part homily, part pep talk, … END_OF_DOCUMENT_TOKEN_TO_BE_REPLACED

Creating a program of solo piano music is the ultimate challenge for any improvising pianist. The music on my latest album, Ways of Disappearing (Sunnyside), … END_OF_DOCUMENT_TOKEN_TO_BE_REPLACED

First the good news: As you can see in our annual Festival Guide, there are plenty of jazz festivals scheduled to happen around the world … END_OF_DOCUMENT_TOKEN_TO_BE_REPLACED