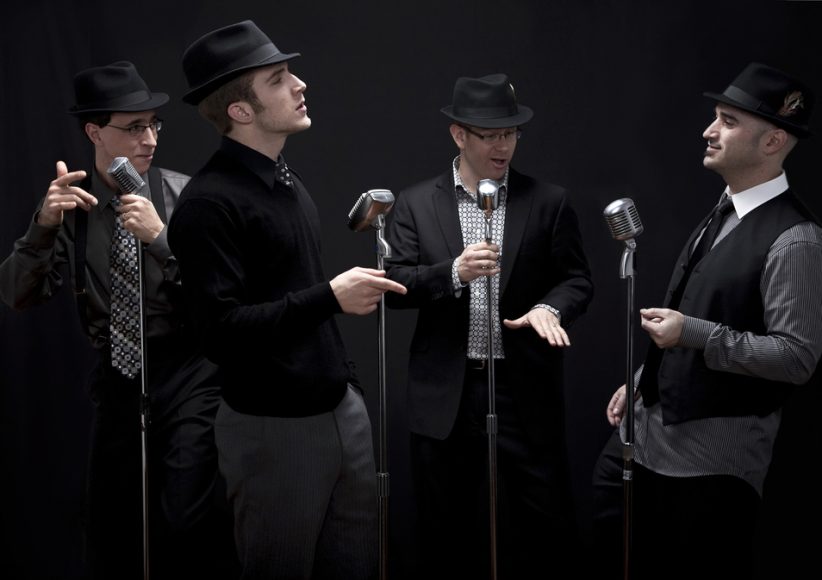 Individually, they’re four of the most talented guys on the Toronto music scene. When they come together as Cadence, their reputation, and audience, extends well beyond Canada’s borders, earning them a deserved reputation as one of the finest all-male a capella jazz groups around.

The foursome, which has appeared with Bobby McFerrin at the Festival International de Jazz de Montréal and were part of the 2001 World Leaders Tribute to Quincy Jones, was formed a little over a decade ago when Carl Berger, then enrolled in the music program at York University, teamed with fellow students Ross Lynde, Dylan Bell and Kevin Fox. Their debut recording, Frost Free, released in January 2000, focused primarily on classic pop covers – Paul Simon’s “Punky’s Dilemma” and “59th Street Bridge Song,” Lennon and McCartney’s “Drive My Car,” Stevie Wonder’s “I Wish,” “Boogie on Reggae Woman,” Billy Joel’s “She’s Got a Way About Her” and such – plus the sturdiest of a capella jazz standards, Nat Cole and Irving Mills’ “Straighten Up and Fly Right.”

Five years passed before the appearance of the follow-up Twenty for One. This time, the pop quotient was lowered, though Simon remained on the group’s radar with a reggae-spiced “50 Ways to Leave Your Lover.” Their musical palette expanded to include a blistering “Hit That Jive Jack,” a densely layered take on Mingus and Joni Mitchell’s “The Dry Cleaner from Des Moines” and a spicy “Perhaps, Perhaps, Perhaps” cleverly blended with “Can’t Take My Eyes Off You.” A smattering of original compositions, highlighted by the tender, hymn-like “A Perfect Kiss” and rumbling, ruminative “Blues On Sunday,” rounded out the playlist.

Somewhere between 2005 and 2010, Bell and Fox departed, replaced by another York grad, Aaron Jensen, and Montrealer Kurt Sampson. Adopting the cheeky slogan “instruments are for surgeons,” the revised lineup – tenors Ross and Jensen, baritone/bass Berger and bass Sampson – entered the studio in 2010 to lay down a dozen tracks for their latest (and best) album, Speak Easy. Simon must be some sort of totem for these guys. This time around, a loose, easy “Still Crazy After All These Years” finds its way onto the set list. True to their Canadian roots, they also cover a trio of hits from homegrown masters: an appropriately wistful rendition of Joni Mitchell’s “Both Sides Now,” a superbly shaded, Ross-led treatment of Neil Young’s “Harvest Moon” and a shimmering, doo-wop interpretation of Gino Vannelli’s “Black Cars.” Adding a touch of Vegas kitsch to their repertoire, the boys cut loose on a Rat Pack-worthy romp through “Ain’t That a Kick In the Head” and a boppin’ ride across “Just a Gigolo/I Ain’t Got Nobody.” But the Vegas vibe reaches its apex on the Jensen original “High and Drysville,” a sparkling cocktail that seems equal parts Sinatra and Dr. Seuss. Jensen also crafted the arrangement for a dynamically hip “On the Street Where You Live” and wrote “Good Love,” a furtive tale of fulfilling romance with strong echoes of the Gershwins’ “Summertime.”

Though Cadence seems to have established a once-every-five-years recording pattern, the precedent may soon be broken. This month they’re back in studio, assembling what promises to be a freewheeling holiday album. Meanwhile, all three of Cadence’s current releases are available on iTunes.

Organ trios and quartets were ubiquitous by the mid-1960s. In African American neighborhood bars and clubs up and down the East Coast, throughout the Rust … END_OF_DOCUMENT_TOKEN_TO_BE_REPLACED

Terence Blanchard looked around the restaurant table and launched into a gentle sermon about jazz education in Detroit that was part homily, part pep talk, … END_OF_DOCUMENT_TOKEN_TO_BE_REPLACED

Creating a program of solo piano music is the ultimate challenge for any improvising pianist. The music on my latest album, Ways of Disappearing (Sunnyside), … END_OF_DOCUMENT_TOKEN_TO_BE_REPLACED

First the good news: As you can see in our annual Festival Guide, there are plenty of jazz festivals scheduled to happen around the world … END_OF_DOCUMENT_TOKEN_TO_BE_REPLACED