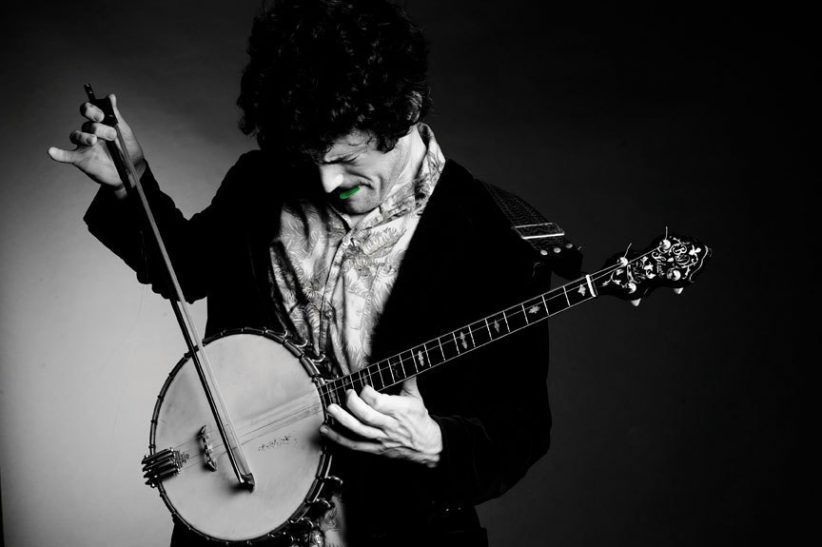 Brandon Seabrook has an itchy, overdriven, often evil-sounding interface with the banjo, and as an improviser he uses it to establish a clear but aggressively unsettled identity. You can grasp this intuitively within a minute or two of “Sacchetto Mal D’Aria,” from the second self-titled album by his band Seabrook Power Plant. Beginning in almost meditative fashion, the track soon yields to the pressure of his dartlike finger-picking, in hyper-articulated 16th notes, through an increasingly ominous harmonic pattern. There’s some studio multitracking, so that his lines can be doubled in octaves, and some likely sampling, so that a drone-produced by running a bow across the banjo’s strings-spreads out like a blanket beneath. And then comes the riff, a creepier proposition, derived from an East Asian folk scale but twisted into a slow-bashing stoner-rock groove.

What’s going on here? You get the sense that Seabrook would prefer to keep the answer just out of reach. He’s a jazz musician of mercurial and sometimes confrontational temperament, loosely after the manner of John Zorn, who featured him on a Masada-centered Tzadik compilation called Voices in the Wilderness in 2003. Seabrook, a guitarist by training, is a product of the New England Conservatory, where he studied with drummer Bob Moses and served a meaningful stint with the klezmer crowd. He has the decidedly Zorn-like propensity for quick-flash permutation, along with a related disregard not only for genre distinctions but also formal delineations. To put it more simply, he’s a scrambler, committed to the power of disruptive energy.

Seabrook Power Plant and Seabrook Power Plant II, both on the Loyal Label, frame that impulse unsparingly, as if in cold fluorescent light. At heart the albums are a blunt showcase for Seabrook’s band, which features his brother, Jared Seabrook, on drums and Tom Blancarte on bass. (The name of the trio is almost certainly a riff on a nuclear plant in Seabrook, N.H.) The songs are short but convoluted, with a headlong thrust that swears allegiance to the forces of hardcore punk, thrash metal and heavy-gauge fusion. “Black Sheep Squadron,” a tune from the newer disc, suggests the shredemonic ideal that descends from the Mahavishnu Orchestra to a band like Tribal Tech and, in its geekier moments, the progressive-metal outfit Mastodon.

But that’s one of the pieces on which Seabrook plays guitar. On tenor banjo, an instrument he first began to play seriously during his years at the New England Conservatory, he reaches a deeper wellspring of personality. Partly this is by default, of course: There simply aren’t that many compelling banjoists in jazz, even by the broadest definition of the idiom. The banjo, ubiquitous as a rhythm instrument in jazz and dance bands early in the last century, has produced strikingly few improvisers capable of transcending its period connotations and genre restrictions. (You’re no doubt aware of the most obvious exception, who graces the cover of this magazine.) There are technical reasons for this, having to do with the built-in limitations of the instrument: typically just four strings, with a quick decay and that unmistakable, unavoidable twang.

All of which helps Seabrook’s case as a sonic provocateur. As it turns out, it’s thrillingly disorienting to hear a banjo strummed with manic intensity over a sludgy, furious churn. That’s how the first Seabrook Power Plant album begins, courtesy of a tune called “Peter Dennis Blanford Townshend.” The second album opens with a similar jolt, though in that case, on a song called “Lamborghini Helicopter,” the strumming has been supplanted by finger-picking, high and spidery, like the sound you used to get when you pressed fast-forward while playing a cassette tape. (If that’s an alien concept, ask your parents.) Later on, in “I’m Too Good for You,” Seabrook returns to strumming, but his riff, tattooed with a blackened chromaticism, hardly sounds like the stuff of Preservation Hall. The banjo’s thin timbre and fast action make for a surprisingly good complement to cathartic darkness, and Seabrook knows how to work that seam.

It would be a mistake, though, to attribute Seabrook’s banjo explorations to any strain of opportunism or novelty-seeking. First and foremost, the instrument seems to present possibilities to him that the guitar fundamentally lacks. “Ho Chi Minh Trail,” from the first album, makes this point seem obvious: Its plangent Far East tonality would be difficult to replicate on an instrument other than some kind of banjo. “Forcep Perfection,” from the second album, is even better evidence-an unaccompanied track on which Seabrook uses an alternate tuning to create his own non-tempered soundscape, suggestively exotic but not of any one place. It evokes the art of the visionary composer and instrument-builder Harry Partch, but with more of an investment in virtuosity.

Intriguingly, there are also two strong new jazz albums out that feature Seabrook as a sideman, and in each case he shows a more conventional (or if you prefer, tasteful) side. If the Past Seems So Bright (Sunnyside) is the second album by Plainville, a group led by the saxophonist Jeremy Udden, who has known Seabrook since their high school years. A track called “New Dress” begins with a banjo filigree, light and rusticated, that flows gently throughout the ensuing ensemble interplay. It’s calmly idyllic, forthright and lovely, about as far from the Seabrook Power Plant aesthetic as you can get.

A similarly hushed sensibility pervades “Broken,” a balladic original on Action-Refraction (Palmetto), the most recent album by bassist Ben Allison. Here you find Seabrook on electric guitar rather than banjo, creating striations of feedback and a prickly, reverberant solo that seems to take place at a considerable distance, like a lightning storm out on the plain. It’s a brief but fascinating contribution, and it confirms what should be obvious about Seabrook: That it’s not all about the instrument, after all.

In spring 1963, when Coleman Hawkins was 58 and making some of the most astonishing music of his career, he gave a short but revealing … END_OF_DOCUMENT_TOKEN_TO_BE_REPLACED

Forgive me if I’ve mentioned this before (perhaps repeatedly), but I’ve been playing guitar now for more than 40 years. So when the time comes … END_OF_DOCUMENT_TOKEN_TO_BE_REPLACED

Organ trios and quartets were ubiquitous by the mid-1960s. In African American neighborhood bars and clubs up and down the East Coast, throughout the Rust … END_OF_DOCUMENT_TOKEN_TO_BE_REPLACED

Terence Blanchard looked around the restaurant table and launched into a gentle sermon about jazz education in Detroit that was part homily, part pep talk, … END_OF_DOCUMENT_TOKEN_TO_BE_REPLACED