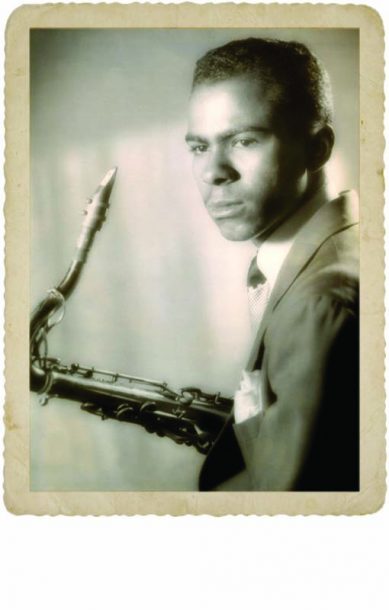 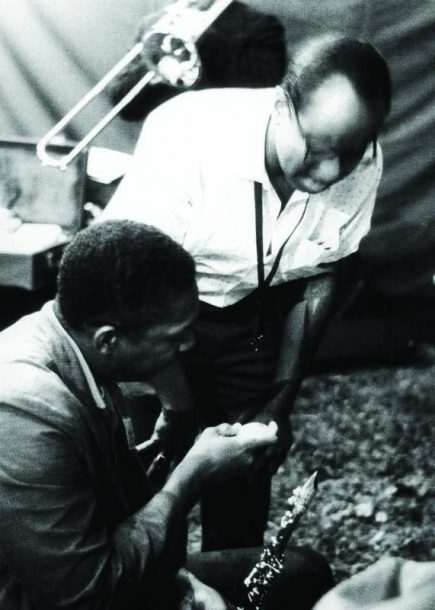 John Coltrane (seated) and Benny Golson, backstage at the 1957 Newport Jazz Festival. Coltrane is looking for a reed and Benny is warming up. This is the only known shot of the boyhood pals, who became lifelong friends and colleagues

The newly released memoir of Benny Golson, now 87, is precisely the sort of thoughtful, finely crafted work you’d expect if you’ve ever seen him in a concert setting, where his erudite history lessons can be just as compelling as his rhapsodic saxophone playing and epochal tunes.

Not surprisingly, some of the book’s most moving sections concern Golson’s soul-deep musical and personal kinship with John Coltrane. Here, JT is proud to publish an excerpt focusing on the future masters’ adolescence, and on Coltrane’s rent-making forays into R&B during the late 1940s.

The news came just as we were closing the issue, too late to change any pages other than this one: George Wein, a man who … END_OF_DOCUMENT_TOKEN_TO_BE_REPLACED

In the context of jazz, the question posed above has a special significance. But that wasn’t what I was thinking of as I asked it … END_OF_DOCUMENT_TOKEN_TO_BE_REPLACED

Taking up a brass instrument comes with specific difficulties in terms of development and maintenance. Entering the jazz sphere adds different weight and dimensions to … END_OF_DOCUMENT_TOKEN_TO_BE_REPLACED