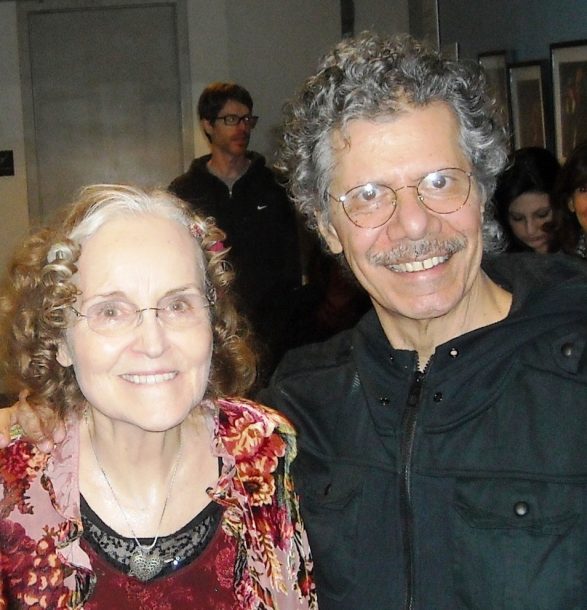 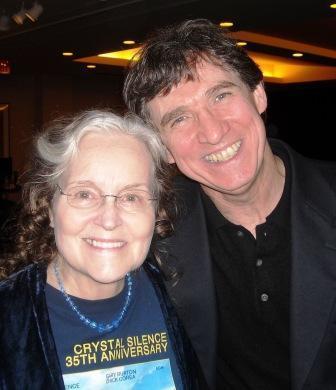 I spent the evening of May 30th in the living room of Gayle Moran and Chick Corea. The odd thing is they now appear to have moved their living room to the elegant confines of the Weill Recital Hall at Carnegie Hall. As the old saying goes…”How do you get to Carnegie Hall? Practice, Practice, Practice.” It seems the two lovebirds of 40 years now, Gayle and Chick, have practiced plenty enough. On this evening they invited a couple of their old friends, Mika and Richard Stoltzman, and other members of their circle of musical compatriots such as bassist David Finck, drummer Duke Gadd (yes, the son of that other Gadd named Steve), pianist David Pihl, percussionist Bill Cahn and members of The Harlem String Quartet plus other assorted musicians to join them. A few hundred of their closest friends and admirers, me among them, joined them as well for a marvelous night of music.

OK, enough of my silliness. This was a formal concert featuring the esteemed clarinetist, Mr. Stoltzman and his marimba master wife Mika titled New Genre! Part II and Gayle Moran Corea was their special, performing guest. She just happened to bring her piano-playing hubby along. I will say that this was possibly one of the most fun and informal, formal musical affairs I have ever witnessed and a great joy for all that were lucky enough to be there. One is not likely to see a concert such as this very often as the musicianship was top notch, the variety of the repertoire was astounding in scope, the setting was magnificent and the spirit conjured by the casual presentation by the players set the tone for a relaxed evening of inspiring music.

The evening was divided into two parts, the first featuring the world premiere of four pieces with the “High-wire jazz marimbist” Mika Stoltzman in the spotlight. The 3-part Marimba Concerto 1. Mkalypso 2. Choral 3. Jubilation by Bill Douglas was an astounding beginning to the night. The piece had everything from jazz to classical to world music elements and was performed with flawless precision and gleeful spirit. A challenging piece simply titled Duet by Steve Reich followed and this was when the true informality of the evening first appeared. Well into the performance Mika began to talk to the players closest to her. It appeared to be communication one might witness during most any jazz performance between the players but soon Mika raised her arms to stop the performers and announced that she had gotten lost and wondered if they might start again. There were no gasps of shock from the audience in this grand hall, instead laughs of acceptance and enjoyment. The piece began again and was completed beautifully, followed by more brilliant music written by John Zorn and William Thomas McKinley, who just happened to be in the audience and was summoned to the stage to take a bow with the performers to end the set leading to intermission. Again, the casual nature of the evening exposed itself. There were some ties but no suits, and drummer Duke Gadd, complete with Generation X tattoos and a cool hat, even ended one of the pieces with a raised fist and loud exclamation of finality! Can you say “Funky but chic?”

Part two of the performance was a complete Corea Celebration! Except for a couple of standards that were surprise additions to the set list, more on that later, the six pieces were written by either Gayle Moran Corea or Armando Anthony “Chick” Corea. First, Gayle took the stage with The Harlem String Quartet, the marvelous group that joined with Chick and Gary Burton on the recent, Grammy-winning release Hot House, to perform her beautiful song “Your Eyes Speak To Me” which she explained was written some years ago for her then beau during a time when they needed a little kindness between them in the early stages of their relationship. The beau in question, a young lad from Chelsea, MA, just happened to be in town on this evening and had been coaxed to join her and the quartet on stage to play piano. After more casual conversation between them Gayle welcomed the audience to the Corea “Living Room” to listen in as the couple treated the listeners to a beautiful rendition of the classic “Come Rain Or Come Shine.” Chick left the stage and took his seat in the audience with the rest of the partygoers, adding more to the casual nature of the night. Richard and Mika Stoltzman, the fantastic bassist David Finck, young drummer, Mr. Gadd and the quartet rejoined Gayle on stage for the next piece.

If angels actually exist then I believe from time to time they lend their clear, high, beautiful and melodic voices to we humans. Gayle Moran Corea might be one of those lucky recipients of this gift and shared that with the audience on this evening. Though there was no amplification of her voice she blended in seamlessly and those angelic tones rose with the rest of the instruments to take a place of prominence. Her contribution to the next three Corea compositions, “La Fiesta” arranged by Edsel Gomez, three of Chick’s marvelous pieces originally created for solo piano, “Children’s Songs No. 12, No. 15 and No. 6” were especially personal in presentation and featured a beautiful synergy between Gayle and Mika. Another musical friend of the Stoltzman family, pianist Kazunori Maruyama, who left his seat in the audience to sit at the piano and join in on the fun, arranged the songs. Gayle casually left the stage at this point but was summoned back as she was reminded that she was needed to perform the next piece, a medley of two Chick classics, “Crystal Silence & Wigwam.” Gayle left the stage to take her seat beside her husband in the audience just as one might sit down on the sofa while someone else took the spotlight in the living room. Richard Stoltzman took that spotlight to introduce the next song in a most conversational way.

Mika Stoltzman, Mr. Stoltzman explained, commissioned the next piece, as she asked Chick in the Corea living room in Florida to write a song just for her. She knew that he had an affinity for the marimba and had even performed on the instrument on the song “Wigwam” with his group Origin. Her stipulation was that the title of the song would include the word GROOVE. So, the piece entitled “Marika Groove” was born and was performed with energy and joyousness on this night. The piece was performed as a quartet of clarinet, drums, bass and marimba and flowed in movements varying in dynamics like a classical-jazz piece of which Chick has proved to be such a master. Much of what had been heard on this evening could be called “Third Stream” music and that certainly applies when one thinks of the last song on the set list for this evening, the Grammy-winning composition “Mozart Goes Dancing” from the Hot House album. The Harlem String Quartet entered the stage again and Mr. Stoltzman told a casual story of how he had been performing the music of Mozart at a classical music event with a man dressed as Mozart in attendance and had in an odd way felt the presence of the great composer as he played. He mentioned this to explain that it was an interesting kind of pressure to feel as he performed the music of Chick Corea with the same Mr. Corea witnessing the proceedings from the audience. His story was followed by a casual comment from one of the members of The Harlem String Quartet who asked knowing that “Mozart Goes Dancing” was a Grammy-winning song added any more pressure? It obviously didn’t affect the performance which as flawless and a fitting end to the proceedings.

The audience roared and all the participants took the stage for one, final bow. Gayle decided to casually ask the crowd if they would enjoy another song? There were hundreds of takers of her invitation and we sat down in the Corea living room for another tune featuring Chick on piano and Gayle on vocals for the classic “My Funny Valentine.” These two valentines have been making beautiful music together, literally and figuratively, for decades now and the next time they invite me to their living room I’m dropping whatever I might have planned to spend some time with them. I’ll happily bring hors devours and my ears. They’ll supply all the heart, soul and music we’ll need!

Several years ago, one of Danilo Pérez’s students was suffering from tendinitis. Pianist Pérez was then a professor at the New England Conservatory; his student, … END_OF_DOCUMENT_TOKEN_TO_BE_REPLACED

As a JazzTimes writer, I can talk about the powers of a dynamic drummer until I’m blue in the face: the weight of each tom-tom’s … END_OF_DOCUMENT_TOKEN_TO_BE_REPLACED

There are certain works of art with which I wish I could have a conversation, so that I might express my gratitude for them. I … END_OF_DOCUMENT_TOKEN_TO_BE_REPLACED