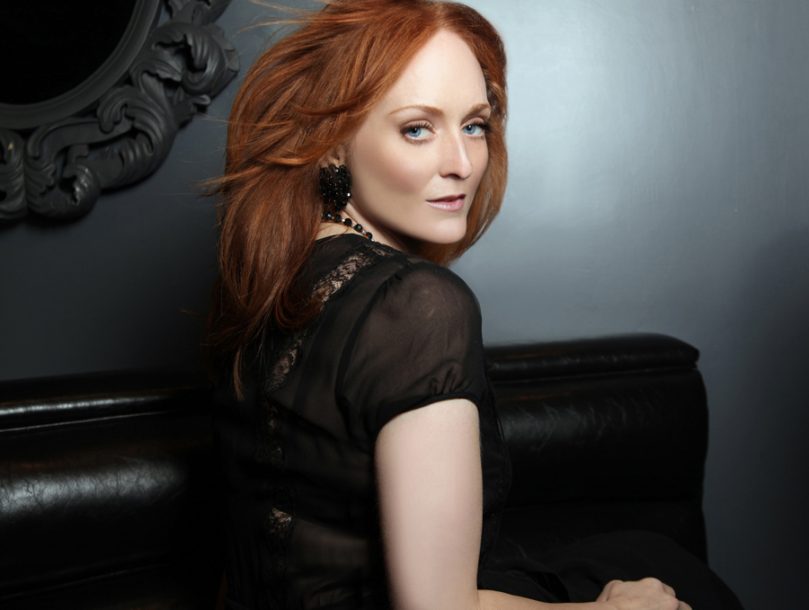 Liza Minnelli. Natalie Cole. Norah Jones. Now, Antonia Bennett can be added to the list of second-generation vocalists with the potential to rival an iconic parent’s pizzazz. The youngest of Tony Bennett’s four children, 36-year-old Antonia trained professionally as an actor at New York’s esteemed Lee Strasberg Theatre and Film Institute. To date, her film credits include the rather forgettable, direct-to-video comedy Dysfunctional Book Club and a couple of scenes with Angelina Jolie in the Clint Eastwood-directed Changeling. Her singing career began much earlier, dating all the way back to age four with her first onstage performance alongside her dad and subsequently propelled by formal training at Berklee.

Two years ago, she made a guest appearance on Tony’s A Swingin’ Christmas, pairing with papa on “I’ve Got My Love to Keep Me Warm.” Now Antonia is stepping out on her own with a 6-track EP, aptly entitled Natural (currently downloadable from iTunes). It is a low-key affair, just voice and piano, plus drums on the closing track, with elegantly minimalist arrangements by Larry Goldings. (Presumably, Goldings is also the pianist on the EP; the superior caliber of the accompaniment certainly suggests an artist of his capabilities. But neither the iTunes download nor the EP’s official press release specifies the pianist or the drummer.)

It is a billed as an album of “jazz standards,” which may come as a surprise to Holly Knight (Natural‘s producer) and Mike Chapman, whose “Love Is A Battlefield” numbers among the six selections, and to country tunesmiths Hank Cochran and Harlan Howard, whose “I Fall to Pieces” is also covered. But labels are immaterial. It is the performances, and the interpretations, that matter, and Bennett scores immensely high on both counts.

There is little vocal resemblance between Tony and Antonia. Her sound suggests the creaminess of Jane Monheit cut with a 90-proof jigger or two of Nellie McKay. Father and daughter do, however, share a precious skill: profound emotional subtlety. Like Tony, she favors languorous settings – smooth as satin, soft as eiderdown and still as a moonlit pond. A less proficient singer would, in such circumstances, easily stray toward torpidity. But Bennett avoids that trap by following in dad’s deep-rutted footsteps and making tremendously clever interpretative choices. On the Gershwin’s “Soon,” too often intensely emoted, she simply lays back and luxuriates in the sweet promise of romantic fulfillment. “Puttin’ On the Ritz” is lent a Dietrich-esque smolder that slowly extracts every ounce of sauciness. Her “The Thrill Is Gone” aches with nicely chilled desolation. Rodgers and Hart’s “I Wish I Were In Love Again” has always been difficult to nail correctly. It demands playfulness with just enough bite to suggest plenty of streetwise experience. Bennett gets it just right.

“I Fall to Pieces” is, however, the EP’s most intriguing, and stunning, track. The trick is so obvious that it is remarkable more interpreters haven’t solved it. Where most singers pile emotion high on the four words that shape the title, Bennett (supported by shrewd Goldings cascades) lets those words crumble as they should, reserving the unleashed heartache for the killer line that truly drives home the romantic devastation: “You tell me to find someone else to love.” Even Patsy Cline would surely applaud such astute lyrical elucidation. Bennett closes with “Love Is A Battlefield,” ably demonstrating that Pat Benatar’s power-rock battle of the sexes loses none of its intensity when interpreted as a coolly intellectualized ballad.

Six tracks are, of course, too brief an introduction for proper assessment of Bennett’s future prospects. So consider Natural less a promise than an opening salvo, but appreciate that the quiet roar of its thunder could well ignite a storm of talent on the scale of Liza, or Natalie or Norah.

If you’d like to share your comments about Antonia Bennett or have suggestions for future installments of Hearing Voices, please direct your email to [email protected]

Organ trios and quartets were ubiquitous by the mid-1960s. In African American neighborhood bars and clubs up and down the East Coast, throughout the Rust … END_OF_DOCUMENT_TOKEN_TO_BE_REPLACED

Terence Blanchard looked around the restaurant table and launched into a gentle sermon about jazz education in Detroit that was part homily, part pep talk, … END_OF_DOCUMENT_TOKEN_TO_BE_REPLACED

Creating a program of solo piano music is the ultimate challenge for any improvising pianist. The music on my latest album, Ways of Disappearing (Sunnyside), … END_OF_DOCUMENT_TOKEN_TO_BE_REPLACED

First the good news: As you can see in our annual Festival Guide, there are plenty of jazz festivals scheduled to happen around the world … END_OF_DOCUMENT_TOKEN_TO_BE_REPLACED