Skip to content
Become a member and get exclusive access to articles, live sessions and more!
Start Your Free Trial
Home > Features > Another Great Day in Philadelphia 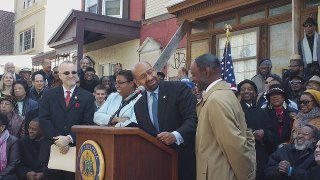 At Great Day in Philadelphia photo shoot in 2012, Mayor Nutter (in the middle), Charlie Rice (right) and Gary Steuer (left) 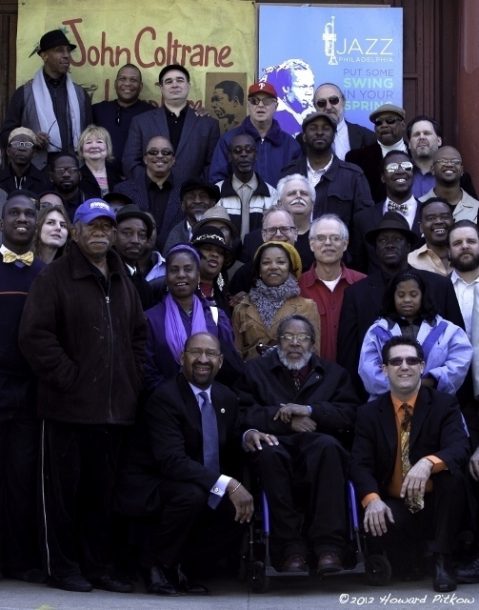 Gathering at the John Coltrane House in Philadelphia

What does it feel like to be overwhelmed by a hundred or so Philadelphia jazz musicians on a chilly morning outside of the John Coltrane House on North 33rd Street in the Strawberry Mansion section of the city? Publicist Graziella D’Amelio, who was checking people in when they arrived, said she felt like she was “on a receiving line at one of the most special family gatherings. I was leaning on a stoop next door to the Coltrane house , holding down photo release forms with one hand while receiving kisses and warm greetings from musicians and vocalists. It was a fun crazy morning.” And so it was.

Last year, I raked the city over the coals a bit in my column because the mayoral press conference celebrating Jazz Day belly flopped badly when Steuer’s office somehow skipped over local luminaries and asked the wonderful bassist Ron Carter (from Michigan) to discuss the revered tradition of Philly jazz.

But today made up for all that. Gary Steuer reconstituted the city’s Jazz Coalition, a collection of presenters, musicians, and educational institutions, gave it some mojo and let ‘er rip. Combining the day’s celebration with a more suitable press conference from Mayor Nutter, the photo shoot would highlight the distressed condition of the Coltrane House, which had fallen into severe disrepair ever since Mary Alexander, Trane’s “Cousin Mary,” went into a nursing home, and jump start the fundraising; to renovate the National Historic Landmark.

Almost everyone was on the scene this morning: drummer Mickey Roker cracking jokes with the other drummers congregating around him, saxophonist Odean Pope smiling and laughing with old friends, singer Miss Justine kissing every cheek in sight, guitarist Jimmy Bruno looking stunned by the size of the crowd – so many up and coming musicians and old heads were there, and a few people nobody recognized at all.

Mayor Nutter made a wonderful speech and came close to choking up about the “wonderful memories” he had “literally growing up in a nightclub in North Philadelphia at Broad and Germantown. . .” The musicians broke into laughter and one person said “whoa” real loud, so Nutter said, “All right, let me say, the statute of limitations on all the stuff I did has expired. No tellin’ any tales. I got like a serious job now.”

Then, before venerated music teacher Lovitt Hines from the Philadelphia Clef Club conducted his young students in the Coltrane tune “Impressions,” 92-year-old drummer Charlie Rice was brought to the podium to say a few words and accept a proclamation from the Mayor.

Rice, part of the house band at the famous Downbeat Club in the 1940s with Red Rodney, had played with all the greats buzzing through town back then, and he later toured and recorded with Louis Jordan and Chet Baker. Charlie Rice, who started out as a tap dancer, was very comfortable at the dias with the mayor and didn’t miss one beat. He talked about going out on the road with ‘Trane and Eddie “Cleanhead” Vinson, playing the “chitlin circuit down south” and how “a lot of people used to look at us [funny] when we would play ‘Sippin’ at Bells’ or something. I said, ‘What’s this? They don’t like jazz at all!’ And Eddie Vinson said we had to play the blues to get them in the hotel and then we could play jazz.”

The press conference didn’t last long. After Mayor Nutter stopped speaking sweetly off the cuff, he consulted his prepared notes and stunned everyone by mentioning Bobby Rydell. But nobody cared – they loved him for being there and reaching out to a community that has hungered for some recognition in their own city for a long time.

Elena Bouvier, the talented photographer who took the last Great Day in Philadelphia photo in 1995, elbowed an AP photographer to her left and got the shot, capturing a moment in time that everyone knew would play out differently later as personal reminiscences tinkered with the memory.

Organ trios and quartets were ubiquitous by the mid-1960s. In African American neighborhood bars and clubs up and down the East Coast, throughout the Rust … END_OF_DOCUMENT_TOKEN_TO_BE_REPLACED

Terence Blanchard looked around the restaurant table and launched into a gentle sermon about jazz education in Detroit that was part homily, part pep talk, … END_OF_DOCUMENT_TOKEN_TO_BE_REPLACED

Creating a program of solo piano music is the ultimate challenge for any improvising pianist. The music on my latest album, Ways of Disappearing (Sunnyside), … END_OF_DOCUMENT_TOKEN_TO_BE_REPLACED

First the good news: As you can see in our annual Festival Guide, there are plenty of jazz festivals scheduled to happen around the world … END_OF_DOCUMENT_TOKEN_TO_BE_REPLACED