Skip to content
Become a member and get exclusive access to articles, live sessions and more!
Start Your Free Trial
Home > Features > An Australian Jazz Drummer’s Search for Musical Shaman in Korea 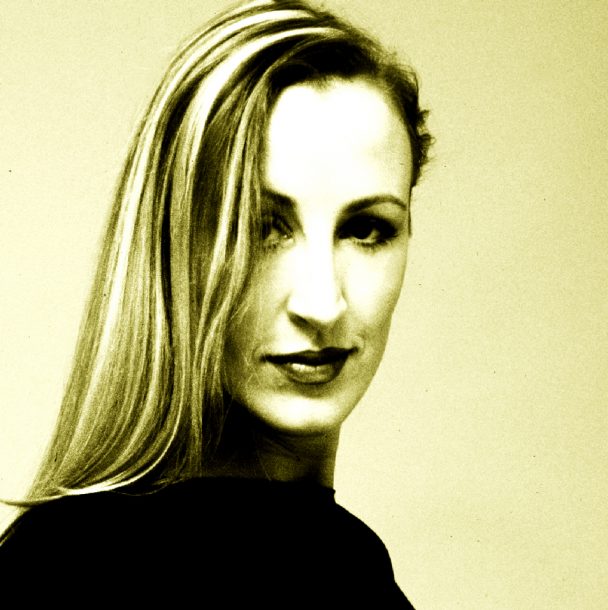 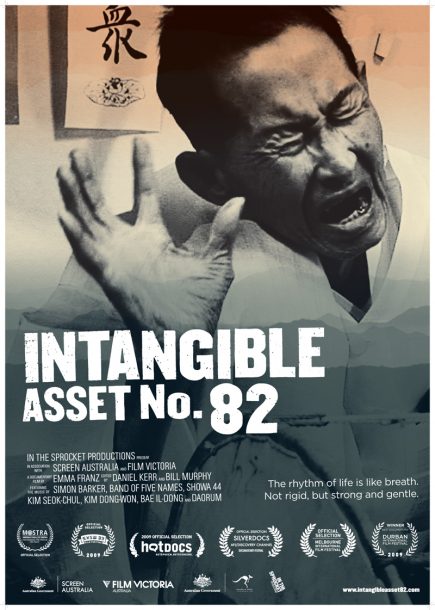 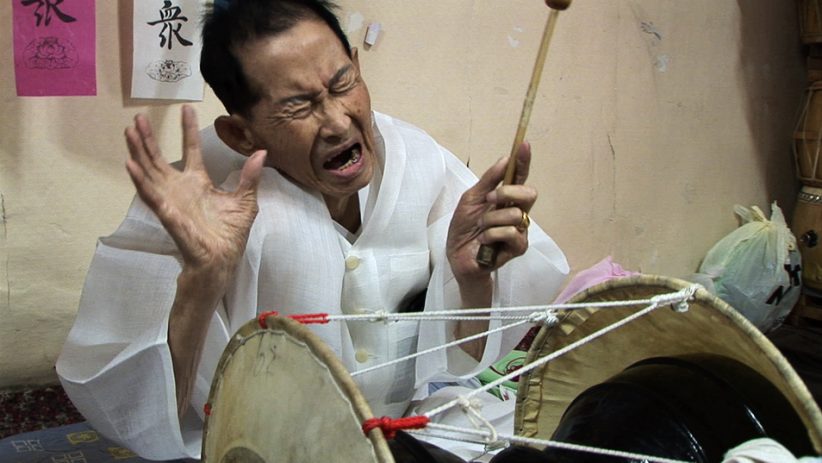 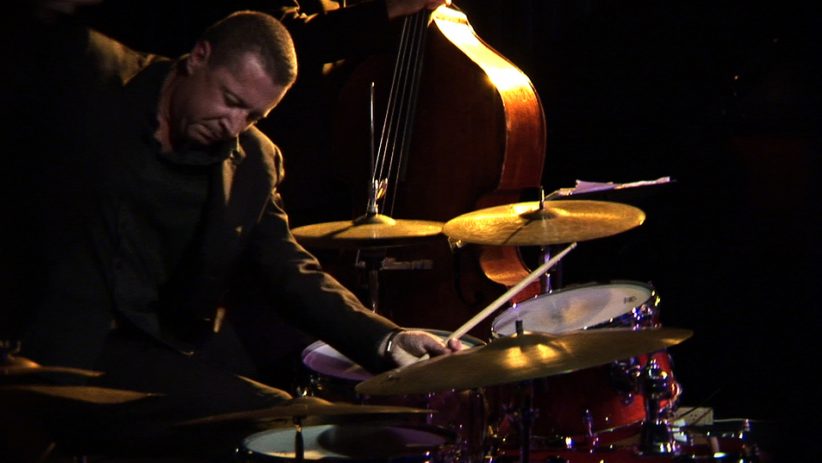 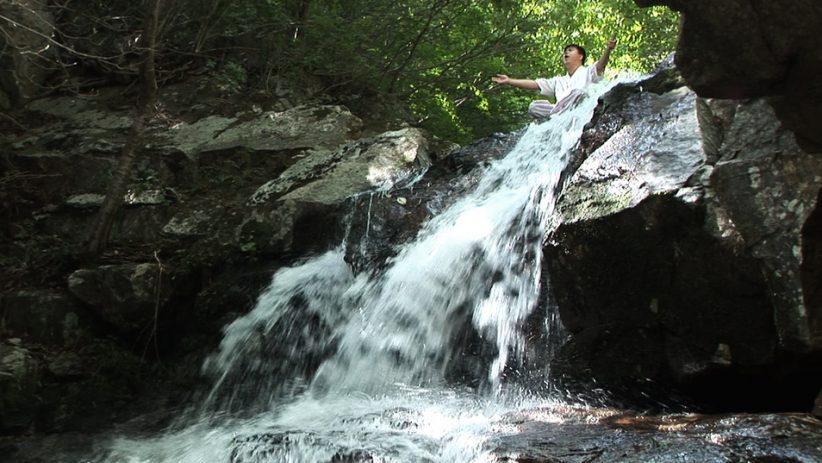 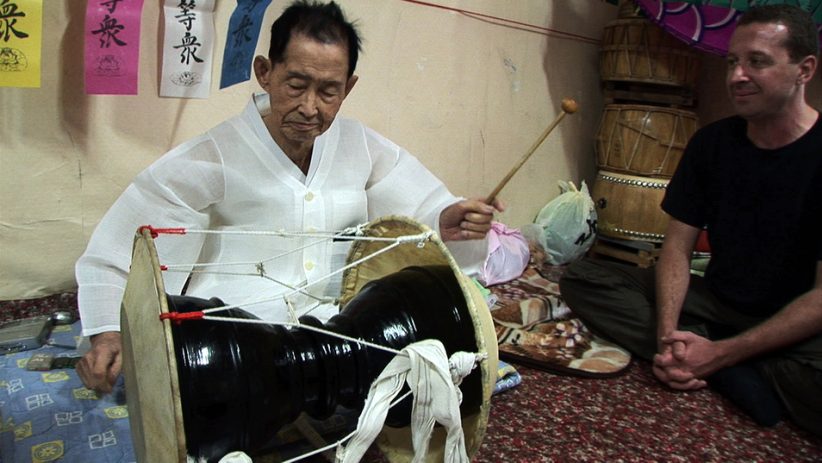 For drummer Simon Barker, it all started with a tape of Korean music that a friend had given him. The Australian jazz musician was floored by the sound on the tape and was particularly captivated by the drummer, whose herky-jerky rhythms spoke to Barker. That tape sent Barker on a quest to not only find that drummer, but also to reinvent himself as a musician. Filmmaker Emma Franz documented Barker’s musical and spiritual journey in a fascinating documentary called Intangible Asset Number 82. The film has been featured at film festivals all over the world and will be available on DVD later this year. And the film will be shown at Jacob Burns Film Center in Pleasantville, New York on Thursday, May 27, 2010.

A musician herself, Franz was looking for a subject that could express how she felt about music from her own travels with it and “could demonstrate it as the universal language that it is by finding a narrative that people could perhaps connect with on an emotional level – as opposed to just ‘telling’ people, which many films do.” She initially got involved with the project when she was in a recording session with Barker, who told her that he was looking for a shaman. “He started to describe what he had been doing, taking trips to Korea, and I thought that it would be an interesting journey,” explains Franz. “I knew if a thirty-something jazz musician and an eighty-something Korean shaman could meet, a connection would happen through music, and that connection could beautifully illustrate what I was trying to express due to the fact that they were from such disparate walks of life and with no language in common.”

In the beginning of the film Barker explains that he has learned the identity of the drummer on the tape. It’s Kim Seok-Chul, a musical shaman, who uses music to bridge the spiritual and material worlds. However, despite repeated trips to Korea and extensive research, Barker has difficulty finding much detailed information or material about Seok-Chul. Knowing that the shaman is in his 80s, Barker goes to Korea for the 17th time determined to track him down, in the hopes of studying with him. Over the course of his long musical and spiritual journey, Barker finds a new world of music and culture opening up to him. Along the way, he meets a singer who spends hours virtually shouting his music alongside a waterfall, a woman who became a shaman after becoming possessed at the age of eight and a man who teaches him how to relax by imagining he is collapsing in mourning. Eventually, thanks to the help of a musician/teacher Kim Dong-Won, Barker gets to meet the master, but their meeting turns out bittersweet for reasons we won’t disclose here for fear of spoiling the film’s inherent suspense.

Franz says that she had no idea whether Barker would eventually get to meet Seok-Chul, but she knew that there was something special in his situation. She describes Barker as “humble and eager to learn.” She had known him and his playing previously and then saw and heard the transformation after many years of not seeing him, and felt it would be interesting to trace those influences and changes. “Those transformative musical ideas and moments are something people can be told about, but don’t often have the opportunity to witness or understand in a tangible way,” says Franz. “That was an interesting challenge as a filmmaker.”

In many ways the film is a cousin of sorts to Throw Down Your Heart, in which Bela Fleck journeys to Africa to trace the roots of the banjo. In both films the most powerful scenes are the musical performances in which the inquisitive Westerner collaborates with the indigenous musicians on their turf. Franz says that the idea that music can serve as means of communication is very important to her. “What I wanted the film to demonstrate is that music has a place in culture,” she explains. “It can be hard to express how important music is, how powerful it can be. And how it can be healing and joyous. It’s a language that can act as a bridge.” In one scene, a shaman musician, Park Byong-Chon, who spoke with Barker and played for him, says: “It’s because we are artists that we can get together like this. If we were politicians it wouldn’t happen.”

The title comes from South Korea’s designation of Seok-Chul’s gift as a national resource. Franz was attracted to that concept and felt that the title worked as a metaphor for the power of music. “They [the Korean government] value skills and talents, which I think is a beautiful sentiment-expressing the value of culture in our lives.” ‘Intangible Asset’ refers to the highest practitioner of the art form (the number 82 referring to the art form itself), whose job it is to sustain and pass on the art form. When one Intangible Asset dies, the honor is bestowed on whoever is considered the best living practitioner.

Coming into the film, Barker had learned a lot about shamanic music over the 7 years, and been very diligent in his research of the music. However, for Franz the filming enabled her to learn. “I didn’t know a lot when I started,” she says. “Whilst I tried to research and learnt as much as I could from Simon before leaving, I learned most through the journey and the experience.” One of the more powerful scenes occurs when Barker is in Seok-Chul’s small village for a ceremony summoning the spirit of the master’s deceased sister. “It was spooky to film that scene, not in the sense of being frightened of spirits, but that it was a private and intimate thing” recalls Franz. She was a bit self-conscious filming the intense ceremony, so Dong-Won took her camera and walked around with it. “That was his way of saying it was OK. There were times where I felt like I was shoving a camera into people’s faces. But, you know, it [the ceremony] felt fundamentally human, rather than esoteric.”

However, Franz bristles slightly at the notion that the film might be seen as about shamanism.”I think the film is about the power of music and how barriers can be broken by music,” she says. And because the heart of the movie resides in the musical performances, the sound therefore was critical. Although she had brought lots of high-end recording equipment to Korea, in the end the simplest approach turned out the best. “For many of the scenes I used a boom mike and two stereo mikes and did my best to keep the levels peaking the way my editors had asked,” Franz says. “For the scene at the waterfall, we just used the directional mike on the camera. It was the most natural sound you could have gotten.” Indeed the sound is very naturalistic and the performances, many of which are in small rooms, are pleasing to the ear throughout the film.

The core of the film-Barker’s journey to find Seok-Chul-took about a month of intensive filming, but Franz says that they went back to Korea to film other performances and events, that were integrated into the film, so that the filming stretched to 6-7 weeks.

In addition to arranging for screenings and distribution for Intangible Asset Number 82, Franz is working now on a documentary about guitarist Bill Frisell. And the structure will be different as much because of the subject, who is known for his reserved manner and subtle style. “I don’t want to do a hagiography. I like subtlety, so I’m trying to explore his playing observationally. I want to capture his range of interests, because he really represents a cross-section of American music.”

For more information about Franz, Barker and Intangible Asset Number 82, you can go the film’s web site.

Organ trios and quartets were ubiquitous by the mid-1960s. In African American neighborhood bars and clubs up and down the East Coast, throughout the Rust … END_OF_DOCUMENT_TOKEN_TO_BE_REPLACED

Terence Blanchard looked around the restaurant table and launched into a gentle sermon about jazz education in Detroit that was part homily, part pep talk, … END_OF_DOCUMENT_TOKEN_TO_BE_REPLACED

Creating a program of solo piano music is the ultimate challenge for any improvising pianist. The music on my latest album, Ways of Disappearing (Sunnyside), … END_OF_DOCUMENT_TOKEN_TO_BE_REPLACED

First the good news: As you can see in our annual Festival Guide, there are plenty of jazz festivals scheduled to happen around the world … END_OF_DOCUMENT_TOKEN_TO_BE_REPLACED