Skip to content
Become a member and get exclusive access to articles, live sessions and more!
Start Your Free Trial
Home > Features > Americans Shine on the 4th of July in Montreal: Day 7 at the 34th Montreal Jazz Festival 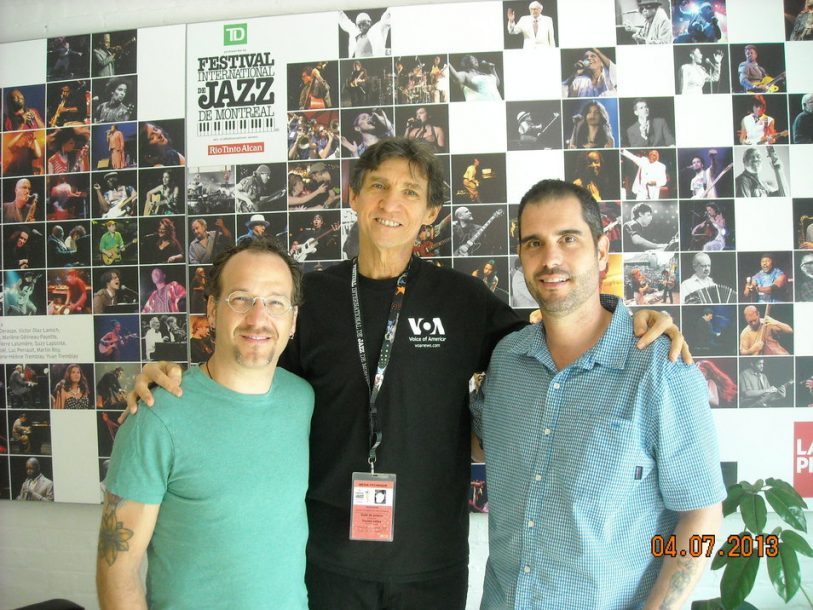 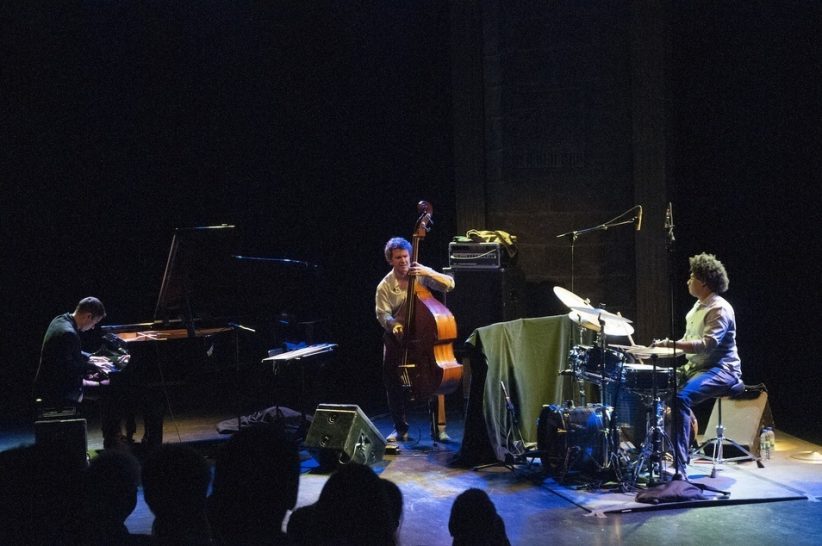 On the lineup of the Montreal Jazz Festival on this most American of holidays were artists not only from various provinces of Canada but Brazil, Romania, Italy, Japan and Ivory Coast. But topping the bill had to be the two biggest names that just happen to be from the good ol’ USA…pianist Vijay Iyer with his trio and the duo of guitarist Charlie Hunter and drummer Scott Amendola. I found a way to take in some of the music from those international artists but saved most of my time to hear my fellow countrymen. I began the day with a daily ritual, visiting the massive press area in the festival headquarters, the Maison du Festival, and instead of simply checking in to visit with the wonderful staff of the festival and see what might be special about the day I came with the purpose of sitting down for conversation with two of those aforementioned Americans, Charlie Hunter and Scott Amendola.

Searching for a quiet place for an interview the always more than helpful festival staff placed me in what they call “The Vault,” the huge room where all of the audio and visual recordings of important performances from past festivals are stored. I felt honored and a little intimidated on some level to be sitting in a room with such history. We even had to physically move a film canister that held a Miles Davis performance from an earlier year to find a place to situate ourselves for the conversation. Charlie Hunter and Scott Amendola met years ago when both were establishing themselves in the vibrant San Francisco Bay area scene, and have maintained a friendship and musical association over these years. Their latest collaboration has the not-so-flippant title of Not Getting Behind Is The New Getting Ahead. Since Charlie’s preceding release was titled Gentlemen, I Neglected To Inform You You Will Not Be Getting Paid I had to ask about his current state of mind and the status of what it’s like being a working musician in his area of jazz at this point in history. Without going into too much detail I’ll tell you it’s tough out there even for players as established, busy and popular as Charlie Hunter and Scott Amendola. I asked about the jazz festival circuit and how playing Europe helps play the bills and was told that it isn’t as vibrant and lucrative a scene as one might think, that the economics of staging festivals has hurt the musicians as much as the promoters and travelling overseas is a tough one too. Charlie has chosen to instead return to the way things were done by jazz artists in days gone by, load up the vehicle and go from town to town in his own country, playing whenever and wherever.

My conversation with Charlie Hunter and Scott Amendola covered a number of other topics from how each of them composes and how they work together as a duo to create the full sound they produce, to why Charlie switched from his 8-string guitar to his current 7-string instrument and how Scott has put together his own solo works mostly with his old associates from the Bay Area. Sitting among 34 years of Montreal Jazz Festival history I was moved to ask how they see themselves fitting into the history of jazz and improvised music. Charlie has a most interesting attitude about that topic and it’s one that I’ve heard from more than a few artists over the years. Charlie Hunter wouldn’t mind if someone called his music jazz or blues or rock or even country and that labels don’t mean much to him. He stated that jazz probably ended after the period simply known as “The Jazz Age” and at the time that Louis Armstrong switched from trumpet to cornet. At that point jazz began to morph into the many different forms that it would become and that morphing process has never stopped. As I looked around the room at all those tapes, films and videos I was struck with the truth of that statement as I am sure there are dozens of subgenres of jazz represented in the performances captured on those recordings, stored in the Montreal Jazz Festival “Vault.” With that intriguing thought running through my mind I bid Charlie and Scott adieu and looked forward to their 10:30 PM set at the old converted church, The Gesu, later in the night.

Hitting the streets to take in some music I first caught one of the many university big bands that fill the air each day in Place des Artes with that traditional sound to create the atmosphere for those taking in the sights and sounds in the city center. This one was from the Universite Laval from one of Quebec’s largest cities. I was on my way for the first of my two visits to Gesu, this time to hear another great American making jazz for the international audience on Independence Day, award-winning pianist Vijay Iyer. Vijay is proud of his Indian heritage, his parents emigrated from India and he was born in the USA and now lives in New York. He has tremendous talent to go along with that massive brain of his as he has a PHD in cognitive science as well as music. His music is absolutely his own style and on this evening, the first of three in the “Invitation Series” that would include a duo performance with fellow keyboardist Craig Taborn and then a solo performance, it was that blend of free as well as strictly constructed jazz and classical that is absolutely Vijay Iyer jazz. His trio, that includes bassist Stephan Crump and drummer Justin Brown, would perform music taken mostly from their recent efforts titled Historicity and Accelerando. The music began with a gentle, chamber-jazz style that moved into more up-tempo passages. The Montreal Jazz Festival crowds are some of the most attentive and responsive audiences you’ll ever be among and they were one with Vijay and trio with every nuance. It most certainly must be a large reason that artists love playing here.

Upon leaving Gesu I found myself passing by the largest of the outdoor stages, Scene TD, where another great pianist and his trio were performing. Hungarian-born but now a resident of Ontario, Robi Botos has established himself quickly as one of Canada’s rising jazz piano stars. Oscar Peterson himself taught Robi and he’s already won awards in Canada for his work. He was finishing his set as I passed by and I heard his two final songs including a very tasty original followed by a most intriguing and surprisingly clever version of the Carpenters’ classic “Close To You.” I’ll be listening for more from young Mr. Botos. I then caught portions of the sets by an Italian aggregation called Canzoniere Grecanico Salentino that plays a unique combination of gypsy jazz, Italian folk style, with 7 pieces utilizing no electric instruments, just percussion, mandolin, accordion, violin and even bagpipes with voices. Then I ran into another Quebec band, this one called Quetango Quartet. As their name might indicate they play the music of Argentina, and feature an Argentine member on cello, but fuse that with jazz and rock. If one is looking for the “something different” in the festival lineup then you would need go nowhere else than the Scene CBC/Radio-Canada stage to hear Quetango Quartet. After these samples of the international side of things it was time to return to The Gesu and support my fellow Americans.

Charlie Hunter and Scott Amendola took the stage before the introduction, setting the stage for a very casual and personal performance in this most intimate of performance halls in Montreal. The Gesu, with its terraced seats in close proximity to the stage, makes one feel as if you are almost on the stage itself and certainly up close and personal with the artists. It’s possibly my favorite venue in Montreal. From the beginning there was a decidedly bluesy vibe to the music and you could tell that these two buddies were keeping things loose. I felt as if I was sitting in on a conversation between the two of them, figuratively and musically at times and literally as well. They talked back and forth as if they were sitting in their living room deciding on what to play next, telling one another what went right or wrong with a song they’d just played, joking about how they should have brought a set list, and occasionally turning to the audience as if they were friends who were hanging out with them to have a quick word about the proceedings. Having enjoyed my half hour of conversation with the guys earlier in the day I felt like it was simply continuing.

The music was very different from past Charlie Hunter shows I’ve seen as Charlie now plays the 7-string instead of the 8-string and he uses less, if any, devices to alter the sound of the guitar. In the past his sound was more electronically enhanced with a familiar “chorus” effect that gave what he played kind of an organ sound. Now his lines are cleaner and though he still plays bass, rhythm and lead simultaneously (John Scofield once told me “I don’t know how he does it”) the outstanding feature of his work on this night was his lead playing. Scott Amendola has as much command of a drum kit as anyone you’ll ever hear and his tasteful contribution was never overdone and the perfect complement to Charlie’s guitar wizardry. The set included some of their latest release Not Getting Behind Is The New Getting Ahead, assorted solo compositions, music from a new album they mentioned would be recorded next week and some assorted jams that came from who knows where and included references to various songs like the ’60’s pop tune “Bus Stop” and a grooving version of “Whatever Lola Wants, Lola Gets.” These two Americans thrilled the Montreal crowd that roared approval and begged for two encores. The audience was not the usual group one might see at a Charlie Hunter show since he’s been attracting the “jamband” fans for some time now. There were a number of middle-aged concert-goers who might have been seeing something surprising. I have a feeling that if more of that age would hear music like this they would love it and expand their tastes into a new area of jazz. It’s a dream I have.

Steve Lacy was once a brilliant bebop player. Yet conventional wisdom says the opposite. Many have long argued that a key to the innovative soprano … END_OF_DOCUMENT_TOKEN_TO_BE_REPLACED

What is a jazz film? Does it have to be a film about jazz and the people who play it? Or can it also be … END_OF_DOCUMENT_TOKEN_TO_BE_REPLACED

Films that tell stories about jazz open a revealing window on the place and perception of the music within popular culture. See Kevin Whitehead’s compelling … END_OF_DOCUMENT_TOKEN_TO_BE_REPLACED

Sponsored When he titled his 1959 album The Shape of Jazz to Come, Ornette Coleman probably didn’t expect that shape to be a familiar one. … END_OF_DOCUMENT_TOKEN_TO_BE_REPLACED