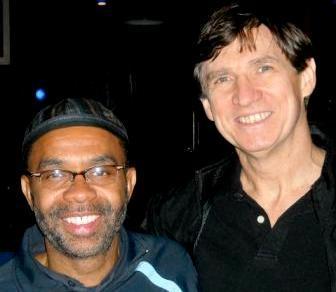 By the time I landed in the beautiful city of Montreal to begin my visit to the 35th edition of the Festival International de Jazz de Montreal the festival was already in full swing. You can go to the festival website at www.fijm.com to see what you and I missed in the past few days and also what we can see and hear if you make a quick trip to take in the festival which ends on July 6th. Everyone, and I’m talking the locals, remarked that this was the single hottest, muggiest day they could EVER remember. Not exactly the days they dream of in the dead of winter, as the temperature was in the low 30’s, and we’re talking Celsius people!

After a quick check in and a walk through the city streets I was ready to head inside and hear what was on the festival menu for July 1st, Canada Day! I already began to soak up some pretty fine music including some rockin’ blues, a totally authentic New Orleans Dixieland Band and two street musicians who weren’t even part of the official festival including some sweet saxophone improv and the absolutely most unique sitar playing with electric beats I’ve ever heard (hey festival programmers…book this guy next year!)

Everyone seems to be talking about the young jazz prince from Armenia, Tigran Hamasyan, who was performing on this evening in the first of his three shows at the festival this year, this one in a duo with another young prince of jazz, Bay-area trumpeter Ambrose Akinmusire. But this day most certainly belonged to some of the American jazz royalty. It’s the least we could get on the day the USA got knocked out of the World Cup by Belgium! The night began with piano great Brad Mehldau in a solo piano performance in the grand Symphony Hall followed by a man who needs no introduction ladies and gentlemen…50 years singing the standards and more…Mr. Tony Bennett! Mr. Bennett may have left his heart somewhere on the West Coast of the USA but by all accounts he stole hearts in Montreal on this night inside the long sold out Salle Wilfrid-Pelletier.

My first live performance of the night took me inside the Place des Arts, the beautiful complex that is a collection of fantastic venues inside the city center. I was there to hear the master bassist Marcus Miller but leading on in a rare first set was a trio of young bloods from Montreal, Parc X Trio, who acquitted themselves nicely with a combination of tightly arranged compositions that sounded like a rock set without a singer. Parc X Trio is a stripped down, minimalistic band with electro-acoustic groove, and features a forceful drummer, electric bass and electric piano with various sound-generating devices. I’d seen a few sets like this at various venues in Europe recently and I’ve always felt like going to Montreal was like going to Europe, so I rest my case.

After a quick set change set change Marcus Miller and crew bounded on stage to give the mostly baby-boomer crowd what they came for…THE FUNK and plenty of it! There was certainly more than a little gray hair in the crowd inside Theatre Maisonneuve as they probably remembered Marcus from “back in the day” as the guy they first came to know as a collaborator with and protégé of Miles Davis. Marcus did not disappoint as the first song of the set featured his powerful, penetrating bass sound that shook the walls of the hall and sent every chest cavity in the place vibrating! The set was not all power-funk though as there were moments of full-blown swing, ballads and a chance for every member of the band that included sax, trumpet, guitar, keyboards and drums to shine.

Marcus Miller, wearing that signature black hat, smiled his way through a completely satisfying set that included much of the music from this latest release Renaissance. One of the songs from the album is titled “Detroit” which just happens to be the home town of another member of current American jazz royalty, Kenny Garrett, who was playing just next door at the Theatre Jean-Duceppe. He’s another “cat in a hat” as Kenny took the stage in his familiar multi-colored skullcap leading a quintet that brought an air of a band that was there to do some serious business.

The man who speaks fluent Japanese, and proved that fact with his introduction from the stage at the International Jazz Day Concert in Osaka earlier this year, also speaks fluent jazz with an African tinge as his first song of the set proved perfectly. Kenny’s quintet is all acoustic but there was no lack of electricity in this set of music. He’s a man who never stops moving and his band of professionals were in sync with their leader throughout. Kenny and pianist Vernell Brown were the primary soloists but everyone got plenty of the spotlight.

Much of the set featured the delightful stream of consciousness flow of the music from Kenny’s latest release Pushing The World Away. There were moments of straight swing including a alto piece right out of the Charlie Parker playbook, to soprano pieces with a Middle-Eastern feel that reminded me of A Love Supreme. I imagined Kenny as Coltrane walking across the North African desert while playing. Put that together with chants and vocal refrains as the music flowed and you’ve got an idea of the spirit being conjured in the hall on this evening. The set ended, though, with Kenny Garrett’s rousing funk anthem “Happy People” complete with a invocation for the audience to join in with clapping, singing and dancing to end the night.

The last member of the current class of America jazz royalty to play Montreal on this night was bassist Christian McBride and his trio. Is there anyone busier these days than the ubiquitous Mr. McBride? The man from Philadelphia no doubt charmed the crowd at the intimate setting of the Gesu and brought another wonderful night at the 35th Montreal Jazz Festival to a close. The world comes to Montreal every year to hear the best of what jazz has to offer and I’m proud to say that so much of it still comes from the place where it was born…the good ol’ USA!

Several years ago, one of Danilo Pérez’s students was suffering from tendinitis. Pianist Pérez was then a professor at the New England Conservatory; his student, … END_OF_DOCUMENT_TOKEN_TO_BE_REPLACED

As a JazzTimes writer, I can talk about the powers of a dynamic drummer until I’m blue in the face: the weight of each tom-tom’s … END_OF_DOCUMENT_TOKEN_TO_BE_REPLACED

There are certain works of art with which I wish I could have a conversation, so that I might express my gratitude for them. I … END_OF_DOCUMENT_TOKEN_TO_BE_REPLACED