Skip to content
Become a member and get exclusive access to articles, live sessions and more!
Start Your Free Trial
Home > Features > Alphonse Mouzon: Conversing Through the Music 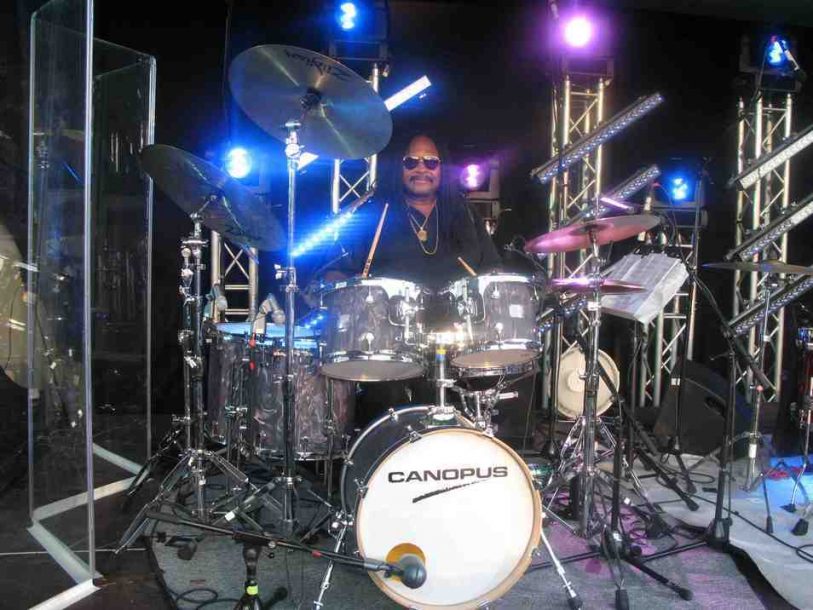 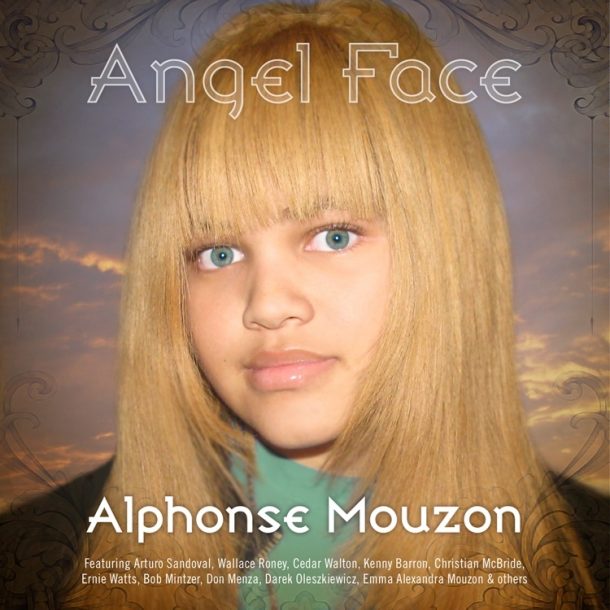 The soul and life of music is fueled by the presence of the drums. In this in-depth interview I sat with my dear friend, legendary jazz, R&B, funk drummer, Alphonse Mouzon, whose influence has reached a scope of genres, including rock. In 1995 the legendary rock band Led Zeppelin’s lead singer, Robert Plant, publicly thanked Alphonse Mouzon during their induction speech into the Rock Hall of Fame, for his great influence and inspiration in their music.

We also talked about his life’s work of over 40 years as one of jazz’s leading drummers from his early years as drummer for piano legends Billy Taylor and McCoy Tyner to his stint with Weather Report and his tenure with Larry Coryell’s Eleventh House fusion band and more.

I found his work fascinating and enjoyed it thoroughly. I hope you will feel the same.

Gigi Brooks: The drums have been your first choice from the very beginning. Please take us back to where it all started for you, especially jazz.

Even at an early age we tinker with things. What was it about the drums that made you stick with it?

Emotion. When I was stressed out I was able to play the drums and relieve all of the tension. I just liked the feeling. It was a God-given gift. I gravitated on playing the drums and beating on things.

When I was twelve I got a drum, not a drum set, but I did get a drum. I knew how to play and my dad got a call from a club and a group from Georgia…an organ trio. The drummer of this group was drunk and I was the closest drummer around…local drummer and I went to the club and I played. I wish there was a recording or a video tape back then of me twelve years old playing. Oh my goodness! That would have been nice to have that documented.

That would have been wonderful to have the opportunity to see you at that early stage in your life. Now moving into your teenage years, you are of course taking your drums seriously, what happened next?

I did have drum lessons from Charles Carter, he lived in Charleston and he went into the army. When he went into the army I took his spot playing with my band director, Lonnie Hamilton III and his band. It was all older guys, I was the youngest one, but I got the same pay. We would play R&B, jazz, everything. We would play restaurants, clubs and we had a guitar player with us too. It was the first time that we integrated a guitar player, a white guy, Joe Wilson and he played with us; we played a lot of places that we couldn’t have played if we were an all black band.

I was making more money than my parents were back then…you know? Twenty-five dollars a night, if I played five nights that was $100; versus $40 a week my mother was making as a cook, you know?

Your style is quite different than most drummers. You’ve learned how to take a jazz drumming pattern and blend it into R&B and rock.

Well I came from R&B and coming from that I was listening to Motown and all of that stuff on the radio… actually in Charleston we used to call it the “record-hop”, where you spin the song and have a drummer play along with it and that’s what I would do.

When I listen to your recordings, the way you play and your style it is active. You use your hi-hat sharply and I believe that wakes people up when they are listening.

Yes. The timing is very important. I’m not a regular drummer just keeping time, what I do, because I am a musician who plays other instruments I try to propel the soloist and keep my patterns and I keep them constant and then I shift them around and shift tempos around within the tempo. It’s like having a conversation and that’s what music should be. I don’t want to keep and steady pattern…it’s too boring. I like adding solos and colors and ride it instead of just hitting and banging.

Larry Coryell is a good friend of yours and you have a great history in music with him. What was it about him that you both were able to work so well together?

After I left Weather Report and McCoy Tyner, I was at a health food store and ran into this guy I knew and he said he had this band and would you be interested in playing with Larry Coryell, he’s a guitar player and I said o.k. I’ll check it out.

I started playing with the band and I said this is cool, I can hang with this. It was fusion with the guitar. Larry was playing and he’s a genius.

Larry and I had this chemistry. We played the straight-ahead, be-bop and fusion. We mixed it up and seasoned it, let it simmer and made a nice soup when we were touring and so forth.

Explain the chemistry. What is it you need from a musician to bring out the best in you?

It’s the conversation. A great conversation like you and I are having, Gigi. Music is the same thing. It’s not boring, it keeps going. Larry and I had this musical conversation. We listened to what each other had to say and how we respond to it. The same thing with Herbie Hancock, we had this chemistry where we would play off of each other.

When you think about your long career, what comes to mind?

I think back to my dance music and my hot dance tracks I had back in the ’80s. I was behind the group Poussez who recorded songs like, “Come on and Do It” and ‘Boogie With Me.” Those were some big hits back then. In those days jazz and disco was great.

They are still playing this music to this day on YouTube and mixing and sampling it in clubs.

Your new release Angel Face which came out late last year has done quite well. What made you decide to record a straight-ahead album?

I wanted to make a classic record. I wanted Angel Face to be classic Miles, Dizzy and Coltrane, you know? When I play piano and drums on the song “Whatever” you’ll hear it’s coming from John Coltrane. “Miles in the Sky” you will hear in “Angel Face” it is a labor of love and is a tribute to Miles. In “Harlem Blues” you’ll hear Dizzy.

The critics liked it too. They thought it was going to be funky and jazz fusion, or smooth; but when they heard it they said “oh, he went back to his roots” and they loved it.

I had Cedar Walton and Kenny Barron on piano and I’m playing piano also. I had Alexandra Mouzon, my daughter, singing on “Stepping Stone” when she was 5, 12 and 13. I had 40 voices of my daughter singing on that track.

What made you use that concept of recording her?

When she was five I brought her into the studio and it was so cute. I would record her between my touring and over the years when she started taking vocal lessons I just kept adding her voice to the track. I could have gone another 10 years doing this, but then the record would have never come out. Finally, I put it on the album.

That song is one of my favorites! I love it!

On that record is Bob Mintzer, from the Yellowjackets, Antoine Roney and Arturo Sandoval you know?

The album has an All-Star band.

You’re teaching drums also correct? How many students do you have?

I try to teach about 8 to 10 students per month, because I teach every week. Being a single dad I have limited hours to do so.

You’ve also done movie soundtracks. You performed with Miles Davis on the album Dingo and also appeared as an actor and drummer in the movie That Thing You Do, directed by Tom Hanks and many other movies.

Yes and The Dukes with Robert Davi, he’s my neighbor too. I want to do more acting, because I studied acting.

Given your history in music, experience and your success what advice to do your have do you have to give to musicians who have never had the opportunity to have their music played on the radio, never toured and just can’t seem to get noticed in this industry?

I would say never give up hope. Keep playing and play as much with guys who are passing through town and network.

You’re speaking of guys who are passing through town or other great musicians who are coming in?

Exactly! Play with those guys.

Do you mean see if they need someone since they don’t always travel with their band? How would they go about being found by these musicians for those types of gigs? What circuits should they be in?

When guys come into town you give them a CD and business card. I always kept tapes around. If somebody needs a drummer then they’ve got something to listen to. It’s about how they play. Not only that, you can hand it to them at a concert and let them know that if they need someone next time they are in town they can call you. Nowadays you have websites and so many other things.

That is great advice! So what’s next for Alphonse Mouzon?

I’m going to work on different music that I do for different movies that I wrote and I still have some live stuff that I need to release with Larry Coryell and Joey DeFrancesco. I also have got to work on my dance stuff and bring that back big time!

Organ trios and quartets were ubiquitous by the mid-1960s. In African American neighborhood bars and clubs up and down the East Coast, throughout the Rust … END_OF_DOCUMENT_TOKEN_TO_BE_REPLACED

Terence Blanchard looked around the restaurant table and launched into a gentle sermon about jazz education in Detroit that was part homily, part pep talk, … END_OF_DOCUMENT_TOKEN_TO_BE_REPLACED

Creating a program of solo piano music is the ultimate challenge for any improvising pianist. The music on my latest album, Ways of Disappearing (Sunnyside), … END_OF_DOCUMENT_TOKEN_TO_BE_REPLACED

First the good news: As you can see in our annual Festival Guide, there are plenty of jazz festivals scheduled to happen around the world … END_OF_DOCUMENT_TOKEN_TO_BE_REPLACED