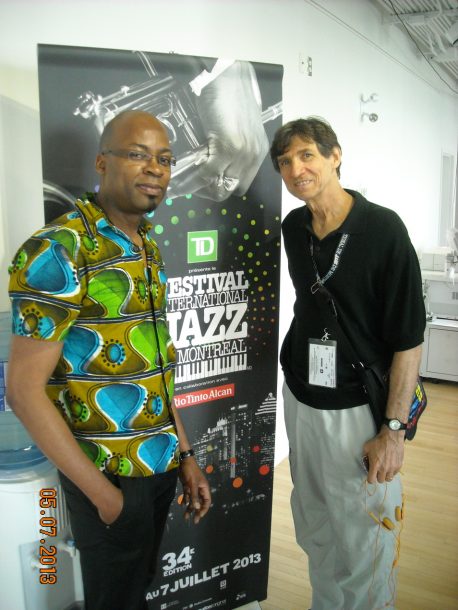 The lineup of the Montreal Jazz Festival on the 5th of July, the 8th full day of this 10-day event, included lots of the tradition of swinging jazz alongside the more modern and world jazz offerings. The great Canadian pianist Oliver Jones, seemingly haven taken the place of Oscar Peterson in the hearts of his jazz-loving countrymen after Peterson’s passing, would play in a solo show. The legendary Preservation Hall Jazz Band would be filling the Theatre Jean-Duceppe with the classic sound of New Orleans as they celebrate their 25th year in existence with their new album That’s It! The charming Canadian songbird Nikki Yanofsky, performing music from her new Quincy Jones-produced release The Little Secret, would be singing standards new and old in a totally modern way while proving she’s grown from the teenager who played the festival not long ago into a talented young lady and a true vocal star. American Bill Charlap, known for swinging on the piano, as well as being the lucky guy who’s married to Canadian-born pianist Renee Rosnes, would give fans of the traditional side of things all they’d need. I’d seen all of these greats, except for Mr. Jones, and decided to seek out the more adventurous artists on the lineup and to hear more new stars I’d never heard before this trip to Montreal.

I began the day, though, in conversation with an artist I’ve been looking to meet for some time, Benin-born guitarist Lionel Loueke, who was performing at the club L’Astral with his trio in celebration of his latest solo work titled Heritage. I caught up with him in the afternoon after soundcheck and in fifteen minutes uncovered the story of Africa’s current “Prince of Jazz” who feels a strong connection not only to his home continent but to Europe and The United States as well. Many of the listeners to my program Jazz America on Voice of America are in various African countries and I have received numerous email messages instructing me to have Lionel as a guest on the show. I passed this along to Mr. Loueke and he simply smiled. He appears to be a very deep, humble, intelligent and gentle soul who never overreacts to anything. I could tell he was pleased to be loved by his fellow Africans though his connection to Europe and The USA are just as strong, having gone through some profound changes during the times of his studies in Paris, Boston at the Berklee College of Music and New York where he attended the “Jazz University of the Streets.” His talents garnered the attention of the likes of Herbie Hancock, Wayne Shorter, Terence Blanchard, Esperanza Spalding, Joe Lovano and others. His solo recordings on Blue Note have been well received and life is generally very good for Lionel Loueke.

I took in his performance later in the night with his trio featuring a Nigerian-born but well-travelled bassist and American drummer. The set began with two pieces that seemed to reflect that gentle side of his soul. I was waiting for the African fire to ignite and only had to wait until the third song of the set. His powerful drummer and that distinctive, thunderous bass of African music were the perfect complement to Lionel’s bright guitar sound. He occasionally embellished the sound inherent in his guitar with simple devices. His voice is also a major part of his sound and it was presented both clean and sometimes electronically enhanced with great effect. The last song was sung in the Yoruban language, which is not native to him, but he was flawless. There was lots of variety in this show, proving that Lionel Loueke is not just an “African Jazz Musician” but a musician and man of the world in general. One can only imagine how far this fine talent will go.

Earlier in the evening I took in the first of two shows presenting what I might call “Jazz In The Abstract.” This one, the second of three performances in Vijay Iyer’s Invitation Series, featured the dual pianos of Mr. Iyer and Craig Taborn. Knowing that Craig Taborn has been known to get funky and to electrify his sound I wasn’t sure what we might hear on this night, but upon entering The Gesu I saw two grand pianos arranged in a “yin-yang” formation so it was obvious that this was to be an all-acoustic presentation. Both gentlemen play with great energy as well as with gentle subtlety so anything was possible. Craig Taborn, like many pianists, has recently released a solo piano album so he’s capable of holding his own with any acoustic pianist. As the performance began the mood was quiet and the atmosphere intense in a cerebral way. The two pianists traded passages and overlapped just a bit with the lines they played but mostly seemed to be creating a call and response pattern as well as taking some space for themselves during the extended pieces that had a definite beginning but no logical end. I wondered if there could or should be any preparation for a performance such as this.

A couple of thoughts struck me as I took it all in. Firstly, could this be considered jazz? There certainly was improvisation. There was harmony, melody and discord but the rhythm was free and the form seemed shapeless. My second thought was concerning what critics of art thought when painters began to create new works that looked unlike anything that had been done before. What did they think when what had been totally discernable before suddenly looked shockingly abstract and otherworldly? I might call the music made by Vijay Iyer and Craig Taborn otherworldly and abstract. A spirit was conjured, no doubt, as these two keyboard masters expressed themselves in a completely personal and spontaneous way.

One of the joys of a festival like Montreal is that once you’ve been under the spell of one impressive performance you can suddenly find yourself in another world altogether. I emerged from the dark, inner sanctum of The Gesu to the summery out of doors of the festival grounds where I found myself in front of the Scene CBC/Radio-Canada stage to take in the rousing performance by one of Canada’s rising stars of piano, John Roney, and his young trio performing mostly music from his new release St-Henri. It had been suggested by more than a few people that I see this guy and he did not disappoint. I’d heard that he had become one of the popular purveyors of Post Bop but had now moved into more electric and modern jazz. I don’t have many regrets concerning this year’s festival but one is that I missed the performance by the Canadian 6-string bass wizard Alain Caron.

My old friend and radio associate Mark Ruffin had chided me for not seeing that show as he knows my taste in jazz and told me it was right down my alley. He mentioned that John Roney and his drummer were part of the band that backed up Mr. Caron and that they were killing! He also mentioned that John Roney’s band was not to be missed. I always take Mark’s advice and he and I were there in the crowd rocking right along with the powerful bass lines and pounding drums that accompanied John Roney’s multi-keyboard setup. They blazed through a set of Roney’s own tunes as well as a variety of others as diverse as the music of drum & bass artist Squarepusher to a delightfully re-harmonized version of Chick Corea’s “Spain.” The sets are limited to about an hour in the outdoor stages so as to keep to schedule and not overlap with the sound coming from other stages in close proximity but I, and the rest of the audience, could have listened on for as long as Mr. Roney and crew cared to play.

My last stop of the night was back inside the Gesu to hear one of the most inventive saxophonists around today, Tim Berne. The show as billed as music from his recent ECM album Snakeoil, but there were a few surprises in store at this performance. From the beginning I could tell that we’d be hearing “serious” music delivered with a light-hearted flair by Mr. Berne and his quartet of young guns, pianist Matt Mitchell, drummer Ches Smith and clarinetist Oscar Noriega. Again, if one was looking for great improvised music but not traditional swing you were in the right place. Tim Berne has probably heard a bit of John Cage, Philip Glass, Bela Bartok and Stockhausen over the years I would imagine. When new classical music blends with new jazz a most interesting convergence can occur and in the case of this evening with Tim Berne’s musical presentation that is exactly what transpired and, in my opinion, with delightful results.

Montreal audiences are an experienced lot who’ve seen it all and are well versed in hearing most every kind of artistic presentation. This audience was in tune with Mr. Berne and band with every note. They were also listening to every word he had to say between songs which were as entertaining a part of the program as the music. Tim Berne is a FUNNY man who acted as if he was reluctant to speak but because the microphone was there he felt obligated to do so. He mentioned that the band was working on two albums, one that was already finished and the other in the works, and that they’d play music from both. He also mentioned that he was in a “song title slump” and had about 20 titles for each piece and would eventually decide. He then played a song that had the title “Jesus Christ Minibar.” Can you sense the sarcasm? Between each well-crafted piece of abstract Tim Berne jazz that featured stellar performances by this formidable group of musicians came more commentary from Berne as he blasted the “Pirates” who download music for free and the “Pirates” at the record companies who make money while the “Non-Pirates” (the musicians) make much less. The moral of the story according to Tim Berne…invest in the Pirates! At the end of the set the crowd roared for more and he returned to the stage asking them if that was REALLY a request for more or were they just being nice, and didn’t they have a “Law & Order” episode that they could be watching on TV somewhere? The band finished with a beautiful Paul Motian piece and the crowd and the musicians dispersed into the Montreal midnight with stimulated and satisfied minds. Thus my trip to the 34th Festival International de Jazz de Montreal came to a close. I’m already planning for next year!

Organ trios and quartets were ubiquitous by the mid-1960s. In African American neighborhood bars and clubs up and down the East Coast, throughout the Rust … END_OF_DOCUMENT_TOKEN_TO_BE_REPLACED

Terence Blanchard looked around the restaurant table and launched into a gentle sermon about jazz education in Detroit that was part homily, part pep talk, … END_OF_DOCUMENT_TOKEN_TO_BE_REPLACED

Creating a program of solo piano music is the ultimate challenge for any improvising pianist. The music on my latest album, Ways of Disappearing (Sunnyside), … END_OF_DOCUMENT_TOKEN_TO_BE_REPLACED

First the good news: As you can see in our annual Festival Guide, there are plenty of jazz festivals scheduled to happen around the world … END_OF_DOCUMENT_TOKEN_TO_BE_REPLACED