Skip to content
Become a member and get exclusive access to articles, live sessions and more!
Start Your Free Trial
Home > Features > A Conversation With Peter Bernstein 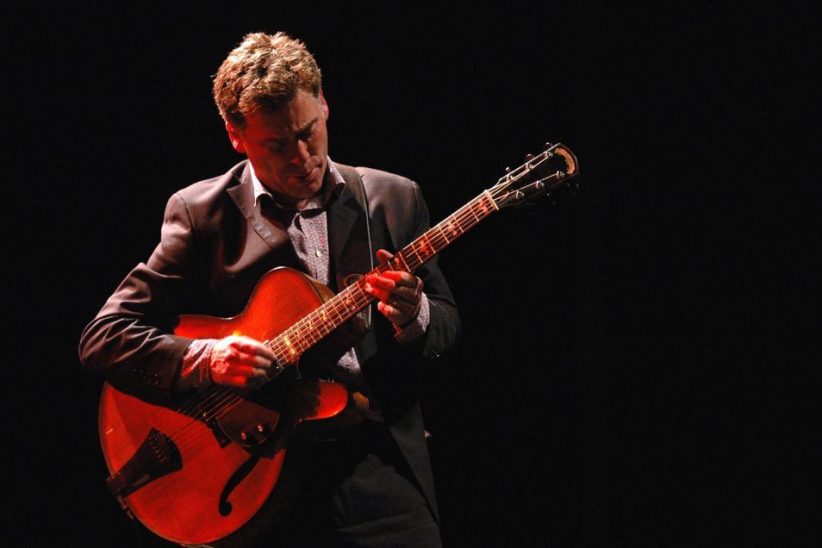 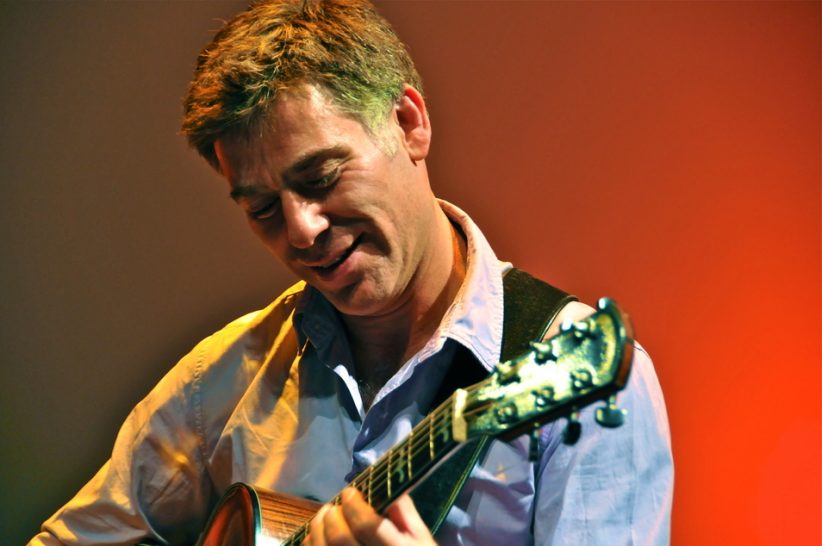 Cradling the body of a brown Zeidler archtop, his left foot rested on the rung of a bar stool, Peter Bernstein pauses during an extended intro to “Yesterdays.” In moments, a trail of changes resonates around the listening room. A familiar melody follows.

Developed over more than a dozen records as a leader and countless records as a sideman, Bernstein’s artistic evolution began as a young instrumentalist, eager to learn from his heroes, his peers and his most inspiring mentor, the late Jim Hall.

“He’s just one of the masters-all-time poets of the music-beyond any instrument,” Bernstein says. “He happened to play the guitar, and was gracious in that the way he played was about the guitar but [at the same time] really wasn’t; it was about his aesthetic. He was that kind of master where his instrument disappeared into his musical persona.”

Hall’s influence on Bernstein’s playing as a twentysomething musician in New York City proved enduring. More than harmonic ideas and rhythmic inspiration, Hall shared with Bernstein the true resonance behind his own expression. “Just to see someone have that kind of identity,” says Bernstein, “and then to be up close and see the specific things he did that made him sound the way he did, I realized-as I did being around all the great players-that it’s really about the details.

“It’s really about the minutiae. He was very careful about his choices orchestrating for the guitar. He was an orchestrator; he really improvised like a composer. He was a thoughtful musician, but also had a great degree of spontaneity in his playing. So he really embodied all the good aesthetics about art in general: curiosity, creativity and imagination.”

Bernstein credits what many peers consider his intuitive understanding of the music to an artistic approach he learned from observing his mentor. “All the choices [Jim] made were very hip choices, based on what he wanted to hear, not on what the guitar led [him] to play,” he says. “Still, the things he came up with on the guitar were very ‘guitaristic.’ He wasn’t shying away from the [instrument]. He was in tune with getting a beautiful sound out of the guitar, but I know in his imagination he was thinking about singers; he was thinking about Ben Webster. He used to talk about being influenced by things beyond the guitar: Ellington arrangements, classical music, great singers, great tenor players, people with big sounds. So he had that-he had a big sound, [but] he found his own way to do it.”

Hall’s sensitive and supportive comping style also deeply influenced Bernstein’s personal aesthetic. “He was a great accompanist,” Bernstein says. “He showed that you are what you play.

“I remember in class [at the New School], Jim would play behind all the students, and kind of make us sound good. He had the ability to make people comfortable, to play their best-play beyond themselves. And yet [he was] challenging, too-he would throw stuff at you; it was exciting! But he also supported you, and I was attracted to that element of the conversation-of playing music with people-that social part of it.”

Decades spent observing Hall inspired Bernstein to explore his own musical expression, and nurture an appreciation for playing alongside other equally expressive musicians.

“I just always loved it. I was into it. It’s a great part of playing music-getting to comp for someone and follow their thoughts, to lead and follow at the same time. I’ve been lucky to play with so many great people of my own generation like Brad [Mehldau], [Larry] Goldings, Jesse Davis, Eric Alexander, Joshua Redman-all these cats-and then also many great horn players of the elder generation.

“I’m trying to get better at it; I listen to piano players. I always go check out guys like Harold Mabern, and I’d always go hear Mulgrew Miller, Herbie [Hancock], of course, people like that. I’d listen to [Herbie] and McCoy [Tyner] records, back to Red Garland and Wynton Kelly and Nat King Cole-where they come from. [I’d listen to them] as orchestrators and arrangers. [Listening to those guys] gives you great ideas on ways to accompany, too-what people have done to orchestrate songs, and how they voice sections.

“Comping makes me listen better when I solo. The experience of comping makes me more attuned to listening in general, because the attention’s not on me. I get to focus on what the [other players are] doing, so then when I’m soloing, I really try to listen and get some kind of conversation happening with the guys who are accompanying me.”

“Playing solo is its own thing, and it’s terrifying, in some cases. Take chances but be grounded; that’s the whole tension. Your entire experience with the tune comes into play; any time you’ve ever played it, that [experience] should be in there. You [have the chance] to meditate on your own thoughts about a tune and try to enjoy that experience, too, as opposed to missing the other guys.

“When you play solo it’s on you to be rooted, because there’s nothing else tying you down. It’s also on you to take chances.”

“As a guitar player, if you’re into jazz and swinging music, you can’t really avoid the organ. It’s one mind doing both things. The thing about playing with [an organ player] is that you just have to get in between their right and left hands; if they had a third hand, that’s where they’d want to play. It’s kind of different than putting your attention on how the bass player is approaching things, and then the soloist, because they’re two different minds. This is one mind. So you kind of focus in on that, and it’s cool. There’s a role for you as a guitar player.

“It’s a great instrument in the right hands. I’m fortunate enough to have played with Dr. Lonnie [Smith], [Larry] Goldings for many years, [Mike] LeDonne for many years, Sam Yahel for a while there, and a little bit with Joey DeFrancesco. It’s great. As a guitar player, you know you have a role, and you can blend. It’s fun.”

Bernstein’s profound creative partnership with Goldings developed when the two were in school together. “Goldings was my musical partner when we were still in high school,” he says. “He played piano, but there happened to be this gig where there was no piano, and we jury-rigged two keyboards to be an organ.”

From that gig, Bernstein set out to understand and internalize the mysterious language of the music he and Goldings began playing purely by accident. “I knew some of those organ records from Wes [Montgomery] and Jimmy Smith,” he says.

“That’s some of my favorite stuff ever-that blew my mind. … [A]s a guy coming from rock and blues I could hear that was blues music, but there were other elements-a lot of it coming from the excitement of the organ, and the way Wes comped behind the organ-the conversation between them, back and forth, that was thrilling to me.

“I heard the blues, but then I heard lots of other, different flavors in there. I wanted to figure out what those colors were. If it’s a language, there are too many words I don’t understand. I’m getting the feeling, but I’m missing the meaning. I wanted to figure out what Wes was playing, what Wynton Kelly was playing, what Charlie Parker and all those guys [were playing]-how are they forming those musical sentences?”

“The guitar and Monk have something in common,” he says. “When you play the guitar, you have to reduce. You have to figure out what notes you can leave out, because you don’t have 10 fingers to play at least 10 notes. You have six strings, at the most, and even that’s hard-it’s lots of juggling. [Most of the time] you’re dealing with three or four notes. Jim was all about counterpoint and voice-leading, and making other lines give the illusion of harmony, other than playing big chords all the time, like a piano.

“Monk was very much about that sparseness, deciding to leave certain notes out of the chord so that the chord would ring together in a way that he specifically wanted. When I started trying to learn [Monk’s music] on the guitar, I was surprised that things lay better than I thought they would. Certain things are pianistic, of course, but more than you’d think actually lay [well on guitar].

“I heard [Bill] Frisell play a lot of Monk with Paul Motian and [Joe] Lovano. He had a beautiful way of bringing out just the necessities of the tune-reducing it to what was elemental. He had a whole different approach [from Jim’s], but paid very much attention to detail, and just sonic relationships. He’s something special. So, he was an inspiration playing Monk; he said, ‘Yeah, you can get that vibe on guitar.’

“For me, I just love Monk. I wanted to play trio without piano and see if there was some way to focus it and think pianistically-have it make sense that there’s no piano there. You wouldn’t want to put the piano player in the position of having to play a whole record of Monk tunes, so it just made sense to make a trio record.”

“I feel very fortunate that [the record] came up and came together so fast. Paul [Stache] and Damon [Smith] from Smoke Sessions Records said we could put it out in May and get the session done in early January, and it turned out everyone was available: Gerald [Clayton] and Doug [Weiss] and Bill [Stewart]. We played some of my tunes [at the Vanguard last May], and it was a fun week. I thought we played well together. One day in the studio was a little nerve-racking, but I think it sounds OK. I’m happy to get to play my tunes.

“All those guys are master accompanists because they have strong personalities. They don’t blend into the woodwork, but they can get into the essence of a tune and bring it out. They get to the heart of it. I hope we can play more, and build on it.”

Depending on how he looks at it, Kenny Garrett’s latest album, Sounds from the Ancestors, has been out for an eternity or an instant. Recorded … END_OF_DOCUMENT_TOKEN_TO_BE_REPLACED

As I delved ever deeper into the 14 albums that document the Larry Goldings/Peter Bernstein/Bill Stewart trio to prepare for our January Zoom conversation, what … END_OF_DOCUMENT_TOKEN_TO_BE_REPLACED

The musical avant-garde is an area where creative people who have earned wisdom through a lifetime of experience can flourish. Wadada Leo Smith, who last … END_OF_DOCUMENT_TOKEN_TO_BE_REPLACED