Skip to content
Become a member and get exclusive access to articles, live sessions and more!
Start Your Free Trial
Home > Features > A Conversation in Spain With Jerry Bergonzi 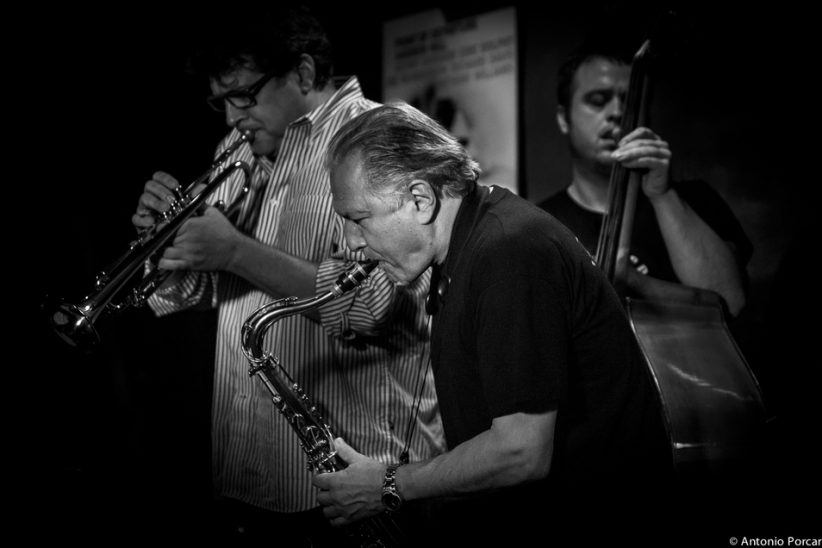 Being in Spain makes Jerry Bergonzi come alive; there is something about the country that serves to highlight this musician’s talent. This summer he returned to the Jimmy Glass Jazz Bar in Valencia, this time without Dave Santoro, but with his colleague and friend Andrea Michelutti. They presented a quartet formation, together with the trumpet player Joe Magnarelli and the young bassist Johnny Aman.

There he was, standing at the front door, as if the heat of a Valencian afternoon didn’t affect him. It was two years since the last time we met, but he looks younger. Tidy white hair tightly-combed back, but with a few free locks matched with a youthful black t-shirt.

He had a quick coffee to start the soundcheck. It was to be the quartet’s first concert in Spain. They looked over the repertoire for about an hour to make changes and add accents that would sound magnificent later that night. It is pleasant to observe them while they prepare for the concert because of the order that surrounds them. The master’s discipline is so healthily contagious.

When the sound-check finishes-a productive rehearsal-Bergonzi tidies up all the reeds spread on the table next to the stage. Then he invites me to sit down at the back of the venue so as to not disturb the people who are about to enter and take their seats. He is the first to ask questions, and he does so with the natural curiosity that teachers have about their pupils’ careers. I need a few minutes to redirect the conversation back toward him, but finally he surrenders and begins to talk about what’s up: music, politics, the universe…

Bergonzi is happy because he hasn’t had time to stop during these last two years. He has been very active teaching, touring and composing. But his website is still not updated. He smiles like a kid: “It’s true! I am terrible for that, totally unable to keep it up-to-date.” But it is not strange at all. He has many more important things to do, like helping his numerous students, one of the driving forces in his life. Yes, he is a musician with a pedagogical vocation. He is a tenured professor in the New England Conservatory and he also teaches around the world, invited by different schools and universities. But it is worth noting that, before leaving home, he always prepares class materials for his substitute.

Even though he is considered one of the best jazz professors in the world, he displays an honest modesty and says that the real master is the music and that he is also her pupil. He is the eternal student. “Nowadays I am working in different ways to play, in different sounds, rhythmic and melodic approaches to make my sound evolve,” he explains eagerly. You can feel his thrill, his wish to keep learning and growing, reinventing himself, even after 50 years of his musical career. Bergonzi admits that he studies a lot, something that other great musicians don’t often confess: “I practice every single day and I write around two tunes per week,” he says. He explains that he writes as an inspirational necessity, because he listens to something in his mind and needs to develop it. He is an ascetic making a life of music, and spiritual as ever he thanks the universe, as “everything comes from it.”

Bergonzi writes music without objectives or fixed formations, something that comes later on: “I just write music without thinking about it,” he says. “Some tunes will sound better in a trio, others with two horns, or with chords … I write anything that shakes my imagination.”

Bergonzi is prolific and if his recording label, Savant, would let him, he would release more albums every year:”I have a repertoire ready for a new album. I would like to call it The 7 Rays, because of the seven rays of the universe thay go through everything: seven days in a week, seven notes in the scale… Seven is a mystic number.”

Talking about music and its endless possibilities he discloses a pure aura and starts philosophizing and making poetry without realizing. And before saying goodbye, he lowers his voice to confess: “I just want to keep playing and writing, trying to discover what I want to be when I grow up. I want to keep being educated in the music, try to find the way to life with her. Because one born with this, this love of music, it’s like an illness with no cure. And you die with it. You can’t be cured, it doesn’t matter what you do. You need to embrace her and find the way to live with her.”

Organ trios and quartets were ubiquitous by the mid-1960s. In African American neighborhood bars and clubs up and down the East Coast, throughout the Rust … END_OF_DOCUMENT_TOKEN_TO_BE_REPLACED

Terence Blanchard looked around the restaurant table and launched into a gentle sermon about jazz education in Detroit that was part homily, part pep talk, … END_OF_DOCUMENT_TOKEN_TO_BE_REPLACED

Creating a program of solo piano music is the ultimate challenge for any improvising pianist. The music on my latest album, Ways of Disappearing (Sunnyside), … END_OF_DOCUMENT_TOKEN_TO_BE_REPLACED

First the good news: As you can see in our annual Festival Guide, there are plenty of jazz festivals scheduled to happen around the world … END_OF_DOCUMENT_TOKEN_TO_BE_REPLACED